TPCast’s HTC Vive wireless adapter is available right now for $299.99. After shipping and taxes don’t expect to pay anything less than $325. The wireless adapter promises a gameplay experience freed up from the weighty cords and cables that restrict users to staying within a certain vicinity when playing their VR titles. After using the TPCast it’s quite obvious that it’s a necessary step for VR to break free from the wires and cables, but the process in setting it up is every bit as cumbersome as you might imagine. 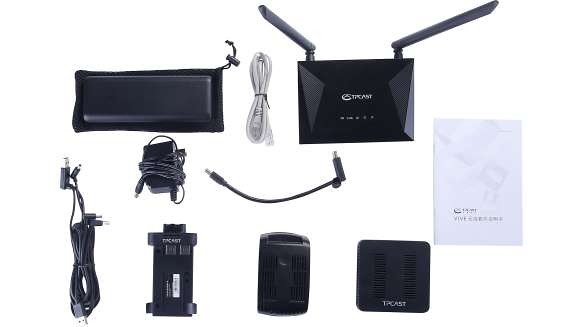 You’ll need to connect the router to your PC, and it can also work as a bridge to your cable modem or existing router if you want to use it for online purposes. The VR signals are sent through a 5ghz channel, but there’s a 2ghz channel available if you want to connect other Wi-Fi devices to the router. The TPCast router may be small and simple but it’s a heck of lot faster than it looks, and has some cool bandwidth control and throttling settings if you want to limit the functionality of other devices connected to it.

It’ll take anywhere between half an hour to an hour to get all the cables sorted and the devices connected. If the above setup sounds like a taxing journey through plugging in and unplugging cables and connectors, well that’s because it is.

However, once you get the hardware aspect done you’ll need to setup the software. This is where things can get tricky. Depending on the version of TPCast you have will determine whether or not your system will recognize your hardware setup. I had realized that I had one of the newer systems, so the instruction manual directed me to the old software driver page, which was for 1.1.2 instead of 1.1.4. This resulted in the system failing to finalize the setup during the installation process. It also turns out you’ll have to visit the English version of the website at the .com portal not the .cn portal.

After wasting two days trying to troubleshoot the problem and talking to customer support about the issue, they finally linked me to the right installation setup file. Hopefully TPCast updates their instructions in the manual in the newer shipments because you won’t be able to use the wireless adapter at all if you try to install the 1.1.2 drivers with the newer iteration of the hardware.

Once that hiccup was out of the way the actual functionality of the headset was a heck of a lot better than I expected.

During the play-testing and having multiple people try it out there was never an issue with anyone getting VR sickness or running into any major problems. I tried it out with New Retro Arcade: Neon app, which worked like a charm. There was the Rec Room app, where laser tag, disc golf, and paddle ball were all played… the receiver and transmitter never skipped a beat and each of the games could be played from start to finish with nary a hiccup. Frame-rates and display rendering were on point for games like Tabletop Simulator as well.

For more fast-paced experiences like Redout: Enhanced Edition and Distance, the tracking was 1:1 and the frame-rate never skipped a beat even on the highest graphics settings. Some people complained on the forums and on discussion threads like Reddit that they experienced some lagging and gray-boxing, but I never encountered any visual lag from the actual framebuffer. There was a minor moment where the gray-box did appear on the left side of the HMD during a test-run in the Steam VR home app, but after moving the PC transmitter out into the open and slightly adjusting the lighthouses to better pick up the position of the HMD, I never encountered another gray box effect. Of course, for casual games and racing games wireless adapters aren’t the most necessary feature or function for VR gaming. Usually you want the freedom of motion when playing games like Karnage Chronicles or Arizona Sunshine, where you need to move quickly and freely to take on the enemies. Well, I can actually say that the TPCast does its job well for wireless connectivity when it comes to high-end, fast-paced action games. It maintained a 90Hz refresh and even with dips none of the games went below 89.7fps.

During the play-sessions with Arizona Sunshine I was able to move around rather quickly and avoid getting bogged down in attempting to turn or move while traversing through the levels. Spinning quickly to attack or aim came naturally and fluently and not having to worry about tripping over the wires freed up the gameplay experience so that it felt far more intuitive and engaging than before. It also works wonders for games like Superhot VR, where you’re no longer bound in your rotations to the lengths of the cable.

The most cumbersome part about the whole thing will be the hardware setup and making sure you can find a solid spot for the PC transmitter that doesn’t uglify your entertainment center or create a serpentine collage of cables running through your play area. However, once the hardware setup is complete the actual functionality of the TPCast is right on par with the wired setup, making it a very viable alternative for those who don’t like being tied down by the cables.

As far as battery life is concerned… that’s all dependent on how long you play. They state that you’ll get about six hours of use out of it but it feels more like four hours. After around three and a half hours of use, the battery was already down to its final bar. Luckily you can charge the battery pretty quickly by plugging it into a USB 3.0 port or a surge protector with a USB outlet where you can recharge it from nothing to full in anywhere between four to six hours. If, however, you attempt to recharge the Anker Powercore battery on a slower port, you’ll be waiting anywhere between eight and 12 hours for it to charge back to full.

If you’re a heavy VR user or have multiple people using the set, you can always pick up a second Anker battery pack for about $30 if you shop around.

However, the other big issue is that you’re still spending upwards of $300 for a wireless adapter. As cool as it is and as necessary as it is for an enjoyable VR experience, it’s still way too pricey for the average gamer. VR is already an extremely expensive hobby and having to pour $300 more dollars into an adapter to just to make it more convenient seems like a massive waste.

That’s not to mention that the Oculus Rift version of the TPCast Wireless Adapter is around $350, so you’re spending even more for the wireless experience. Even if you decided to get the cheapest version of the headset for around $350, you’re still paying $700 for the HMD and the wireless adapter. That’s just too much money and too expensive for the inadequate library of quality VR software on the market.

Until the price of VR and the wireless adapters drop down to the point where you can get both in a bundle pack for around $400, I’m going to have to say that for now you should…