The upcoming contemporary, sci-fi thriller from Application Systems Heidelberg and Backwoods Entertainment called Unforeseen Incidents is gearing up for release on February 1st, 2018.

The game is being billed as a “classical style” interactive point-and-click adventure game that is themed around unraveling a mystery within a small town. Players will take on the role of handyman Harper Pendrell after he encounters a woman dying in the streets and must uncover the conspiracy surrounding her death.

The thematic presentation seems to come across like a mix of Kentucky Route Zero meets The X-Files and Stranger Things. You can check out the very teasing release trailer below, which went live earlier in the month.

The theme centers around Harper attempting to uncover the plot centering around a dangerous disease that could affect the entire future of humanity.

The game will feature multiple dialogue options and a variety of puzzles to solve.

Unforeseen Incidents will also feature both English and German voice acting. It also sounds like Christopher Lloyd is lending his voice to the efforts? 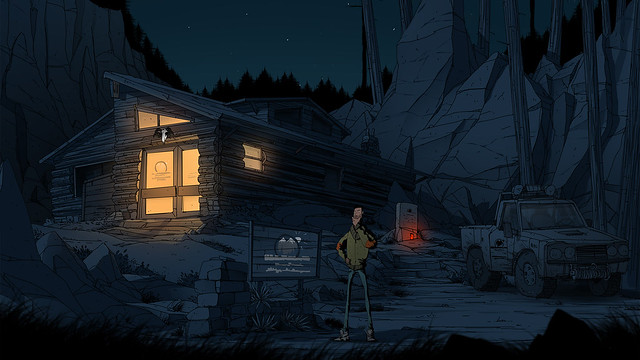 The game’s use of colors and lighting is quite striking.There are a lot of specific coloring techniques to make certain objects in certain scenes pop; you’ll see some foreground objects really stand out and some background objects really stand out. I’m not sure if that’s going to play a role in how you solve puzzles or navigate the environment, but it definitely makes the art-style look unique amongst the throng of other point-and-click indie games out there.

Additionally, the structure of the objects and backgrounds are slightly askew in a deliberate way, indicating that something isn’t quite right within the game’s world. But there are also a lot of interesting design choices in how the environments are constructed, mixing in modern machinery and architecture against the great outdoors, with far-stretching woodlands and forest areas oftentimes surrounding the outdoor settings. Hopefully the story and gameplay will be up to scratch with the art.

You can keep track of Unforeseen Incidents by visiting the Steam store page.