Nintendo and Monolith Soft managed to do it… they managed to complete the Nintendo Switch exclusive, get it up and out for international audiences, and even manage to retain the sexy-time elements much to the chagrin of SJWs. Well, if you happened to pick up a copy of the game and you needed a little bit of help with some of the segments, there’s a walkthrough guide available.

YouTuber Shirrako offers a multi-video playlist of the game, covering the ups and downs in the story, along with the core mechanics of how to play, how to fight, what to do during battle, how the combat works, and where you need to go to progress the story. You can check it out below.

The game starts with a cinematic of Rex heading under to retrieve some treasure.

The cinematic leads directly into the game, where players will get their first taste of the game’s combat system.

Press ‘A’ when you’re in range of a targeted enemy. You’ll begin auto-attacking enemies once you engage them in battle. Once enough attacks have been built up, you’ll be able to unleash an Art.

When you’re not in combat you can hold down the Right trigger and press ‘A’ to sheathe your weapon.

Another cinematic will play with Rex giving a quick backstory about the Titans, Alrest and the mythical land of Elysium.

After another lengthy cinematic, you’ll make your way to the Argentum Trade Guild. When you unlock new landmarks you can quickly fast-travel to the locations, such as Goldmouth. 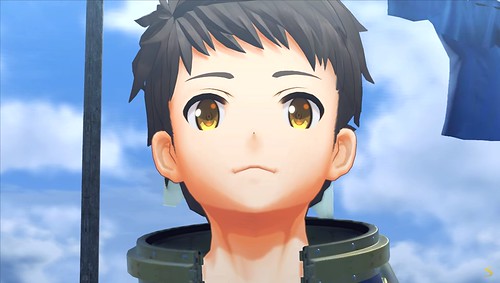 You can also use the ZR button to help fine-tune your focus if you have a waypoint marker on your map.

Like many other newer games the nav-point marker will show you where you need to go and how far away it is.

After you learn how to use the right analog for the camera, go get the next main quest from the Chairman and watch another lengthy cinematic. 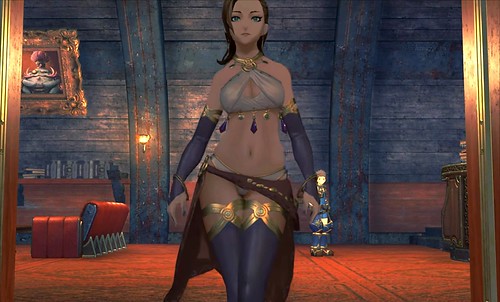 The tutorial will continue to explain to you how to set active quests, and that you won’t be able to see what the navpoint is for that quest until you set it as your main active quest. You can also get help at any time using the left digital pad buttons on the left Joy-Con, or on the Pro Controller.

Head to Shynini’s Accessories in the marketplace and purchase the Abyss Vest from the store.

You can change accessories or items by opening up the main menu, going into the “Character” options, clicking on “Character Setup” and selecting “Accessories” to change your loadout.

You can also alter your Affinities or swap your Arts from the character menu.

Talk to the merchant and then go find Max and you can choose to send 90,000g to Rex’s family or don’t send anything at the moment.

If you have cylinders on you, which you can buy from the salvage shop, you can go to Salve Points located around the docks. Press the ‘A’ button at the proper time during the prompt to get higher quality salvage.

Go talk to Kitoto and buy some food supplies for the main quest.

Finally, go to the inn to rest before the big quest.

The Lemour Inn is just a short ways away from Kitoto. You can cash in bonus experience bonus by sleeping at the end. The bonus EXP will count toward your main level to help you get stronger, quicker.

If you want to take on some side-quests, there are a few available, such as playing Hide and Seek with the kids around the port. They’re all located on the ground level, and the navpoint will also point you in their exact location.

Another side-quest will see you having to help Limuli get a Cinnopon Roll from the Honeycomb Sweets shop just inside the market.

Once you get done moving around the docks and you’re ready to go, head outside toward the port to trigger a cinematic. You also have one more opportunity to complete any other side quests before embarking on the big mission.

While you’re on the Maelstrom, talk to all the Drivers and then head up to the top deck.

Talk to Monell to start your shift as a watchman on the Maelstrom.

Another lengthy cinematic plays and Rex and Nia will have a short bonding moment, where Rex will explain why he became a salvager and how he plans to one day visit Elysium.

The game will finally introduce the three member party system, and you’ll be able to select who comes along with you on the Ancient Ship scavenge. 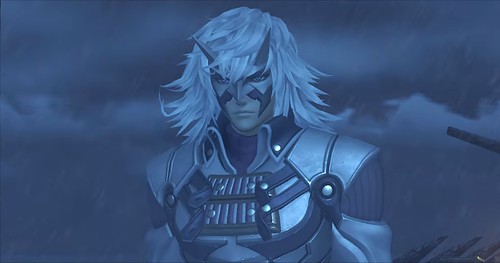 As they mention in the tutorial, you can only have three party members active at a time when you’re in battle. Each party member will also have their own Blades.

You’ll need to make your way up through the abandoned ship toward the lower deck. Technically you’ll have to go up, then down, and then back up again. The ship is designed a little like a maze. 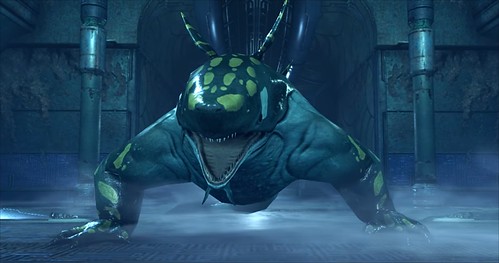 You’ll eventually move through a set of big doors to face off against a level 4 Megalo Aligo.

It’s not a difficult boss to fight.

Once the boss is finished the two emo-dude bros will have Rex open the two doors, and another lengthy cinematic will play, resulting in Jin, the white-haired emo-dude bro, killing Rex.

After another lengthy cinematic where Rex meets Pyra and gets to put his hand on her chest – which results in half her life force being given to Rex in order to restore him to life.

After another lengthy cinematic, you can can then fight Malos with the help of Pyra as your Blade. This will enable the Affinity, which will increase the closer that Rex and Pyra are on the battlefield. Keeping their Affinity high can increase attack damage.

This will also unlock the Blade Combos, which can be utilized by pressing ‘A’ after the meter has filled up. You can increase the specials by up to three levels.

After super lengthy and dynamic cinematic, you’ll finally be able to save your game after nearly two hours in, which leads into…

The tutorial will teach you about leveling up your Blades through Aux Cores, which can be acquired throughout your travels.

Once you get done with the micromanagement tutorials, you’ll have to track down Gramps and Nia.

They eventually find Gramps, dying… but after he dies he comes back right away as a cutesy looking, flying cat-mouse.

After another ten minutes or so of cinematics, you’ll need to travel nearly 300 meters to Nia’s location by following the fallen trees.

When you reach Nia you’ll also receive a tutorial about reviving teammates, being revived by teammates, and using level 2 Arts by triggering them with the ZL trigger.

After re-teaming with Nia you’ll have to kill the Wormeater Brog. Spamming your attacks on it will kill it pretty quickly.

Following another cinematic, the next main mission involves getting to the main town.

You can level up along the way by battling the enemies in your path. It’s a fairly linear path to town.

You can also upgrade your Affinity skills to eventually unlock locked treasure chests by developing lock-picking and Focus skills.

Follow the navpoint until you finally reach the Gormott Province.

You’ll get a short flyby sequence and a cinematic.

Before you get into town you’ll also learn about building trust with the Blades by completing missions with the selected Blade, as well as increasing your affinity with them.

Before you get to town, there are a number of enemies you’ll have to fight along the way.

Eventually you’ll be able to make your way to the town of Torigoth. Be sure to check the trees and rock formations along the way for hidden items and useful treasures.

You’ll also learn about Dev Levels, and being able to expand towns by earning Dev Points and completing quests for people around the town.

You can pick up some new weapons, upgrade your skills, or complete a variety of side-quests before continuing on with the main quest. This is where the game finally begins to open up beyond the near three hours of tutorials.

Once you get done buying stuff and upgrading your character in the town, proceed to head outside of the town to trigger another cinematic. 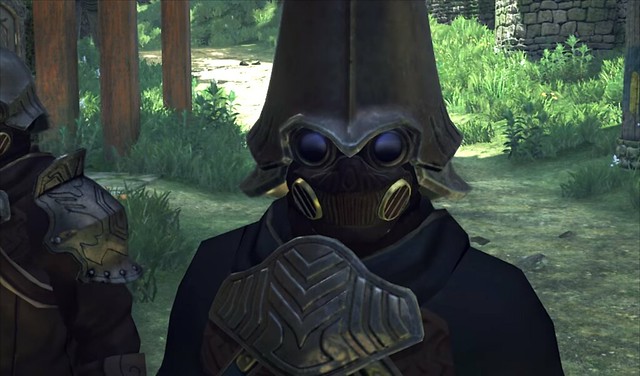 The game teaches you about one of the more advanced maneuvers, which is the Arts-cancel attack. While you’re performing the auto-attack, press the Arts button right at the time of the end of the attack to trigger a cancel-into-an-Arts maneuver. If you can do it successfully enough on the third auto-attack, it will allow to execute a powerful version of the attack.

After you defeat Captain Padraig, you’ll have to fight Padraig again, this time he’ll be accompanied by Lady Brighid.

You’ll want to take out Brighid first; using combos will dispatch of her rather quickly. Another cinematic will play… in fact, a couple of cinematics will play.

Once you get done watching the cinematics you’ll get to use Pyra’s cooking skills.

There isn’t much to it other than just clicking on the cooking option and then watching another cinematic.

After Lady Morag questions Nia, the quest The Race to find Nia starts up and you can finally start playing again. Take Rex and Pyra out into the Galad Residential Zone and talk to the NPC residents as pointed out by the nav markers.

Once you get done talking to the residents, Tora and Gramps will suggest for Rex to get a second Blade. You can have more than one at a time. 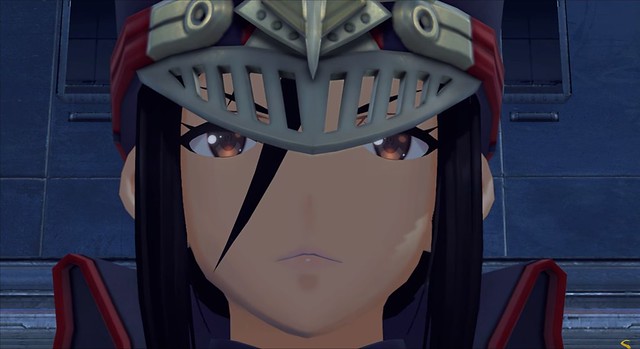 You’ll be able to unlock a new Blade by imbuing it with Boosters and then unlocking its power. Since Rex is the only party member available at the time you will have to bond the Blade with Rex. You can view the stats on the Blade by going into the main menu and clicking on the “Blade” option.

Before you can use Blades you have to first “Engage” them from the character menu. Once a Blade has been engaged, they’ll be able to be attached to a Driver and used in battle.

To increase the Blade’s abilities, you’ll need Aux Cores. You can refine them at the refinement shop, and use any items you have to further increase the strength of the Aux Core.

To find Nia, go talk to Turuni on the side of the building. You’ll have to pay for the information, though, and it will require 3,000G. Once you get the rumors about the battleship, Turuni will inform you about where to go to rescue NIa.

You’ll have to help a few of the townsfolk before you’re able to get onto Lady Morag’s battleship.

In order to prevent the execution of Nia, the team sets out to make an artificial Blade in order to increase their numbers to stand a fighting chance against the Imperial troops.

You’ll need to collect a number of supplies for Tora in order to make the Blade. Once you complete all those quests, head back into the hideout and Tora will create the first artificial Blade, Poppi.