We’re finally winding down to the season finale of Telltale Games’ Batman: The Enemy Within. The second season has been a real thrill ride compared to the first season, and things heat up even more with Episode 4: What Ails You. If you’re cautious about how you play the game, and you’ve been looking for a little help with what choices to make, who to save, who to let die, and how to solve some of the puzzles, there are various walkthrough guides available covering Batman: The Enemy Within – Episode 4: What Ails You for PC, PS4, and Xbox One.

YouTuber DanQ8000 has a modest walkthrough available that clocks in at just under an hour and a half that you can check out below. Keep in mind that some walkthroughs start from different choices and end with various choices based on what happened in a prior episode, so you’ll have to keep that mind depending on if you’re relying on a video guide to help you out.

Dan’s walkthrough starts from the choice where in Episode 3 Bruce took the fall for Selina Kyle.

The episode starts with Bruce inside Mr. Freeze’s cryo-chamber.

When Batman gets to the spa, head into the room with the man with the frozen arm. You can either force him to get you on the elevator, or you can simply tell him that you can stop them if he helps you.

When you get to the bottom of the fake James Bond facility, you’ll need a key card to access the secure door.

Head over to the debris and move the debris to reveal a dying scientist. Take the key card. 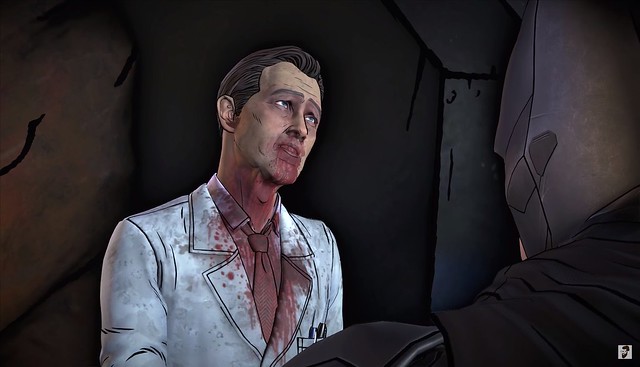 Inside the room Catwoman will intercept Batman. If you choose to thank her she will remember that.

Catwoman will suggest to help Batman fight Bane, Mr. Freeze and Harley. You can either tell her to stay back due to being injured or you can be thankful she’s helping you. If you suggest to fight by her side it will increase the bond between Batman and Catwoman.

After disabling the henchmen, Batman and Catwoman will fight the super villains. Play through the quick-time combat.

During the conversation with Amanda Waller, she will blame Batman for letting John and Catwoman go. However, if you tell her to focus on Harley Quinn then Waller will remember that.

You can interrogate Mr. Freeze when the agent gets called away from the airlock.

You’ll have a choice in helping Mr. Freeze. 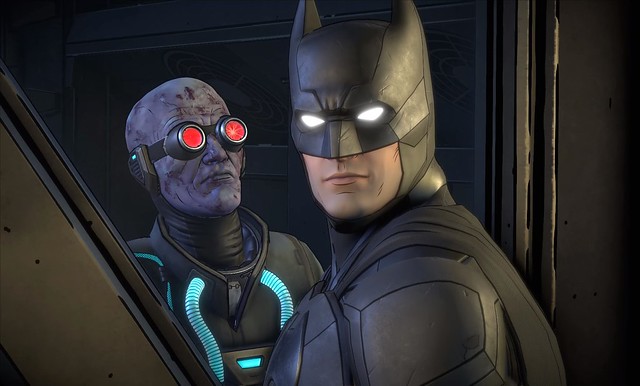 You can choose to either turn down the temperature or keep it the same after Mr. Freeze gives you the information about Harley.

If you choose to help Freeze he will never forget that. Likewise, if you don’t help him he’ll remember that, too.

Examine the warehouse – the vials will be missing, there will be some C4 on a crate, and there’s a Liminal device just behind Riddler’s capsule. 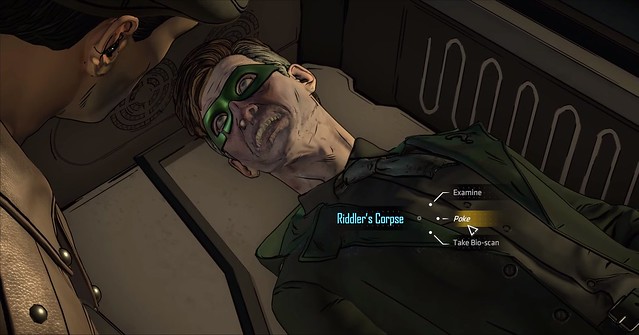 Use the Liminal device on the capsule to open it and bio-scan the Riddler’s corpse.

During the conversation with The Joker, you can tell John that you care and he will drop the gun, and he will also remember that. Alternatively you can get angry with him and force him to tell you.

Before John leaves the room, you can try to reason with him or you can slap him to get him to tell you what happened.

If you’re comforting toward John and trust him by choosing not to go with him, John/Joker will remember that. If you choose to force yourself with him it will sour your relationship with John.

You’ll find Alfred in the Batcave out on the floor. He’s wearing a really nice pair of shiny shoes, must have cost him a pretty penny… or he just used Wayne’s credit card to swipe a pair from Alibaba. Alfred has some swag.

After checking on Alfred, check the Bat computer and then talk to Avesta about the virus.

Tiffany will try to convince Bruce to start using custom made guns. You can tell her that Batman doesn’t kill, or that they’re a crutch, or that he doesn’t use guns. 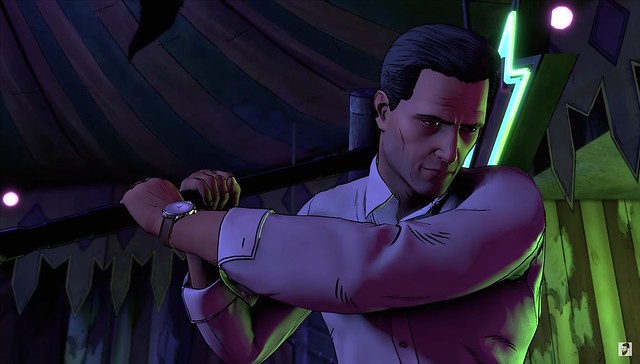 When you get to the fun house, crank the jack in the box and do the test of strength, and then enter into the crazy hall.

The Joker will tell you what happened in the fun house. You can choose to believe him or not. If you patronize him he will remember that. You can also admit that you’ve been using John or deny it. If you admit it then it will confirm what Joker already knew.

Joker will then attempt to call out that Bruce is Batman. You can either tell him he can think what he wants or admit to it.

Finally, you’ll be able to choose to either trust that John is telling the truth or that he’s lying. If you choose to trust him both John and Bruce will drive off to the bridge to stop Harley. 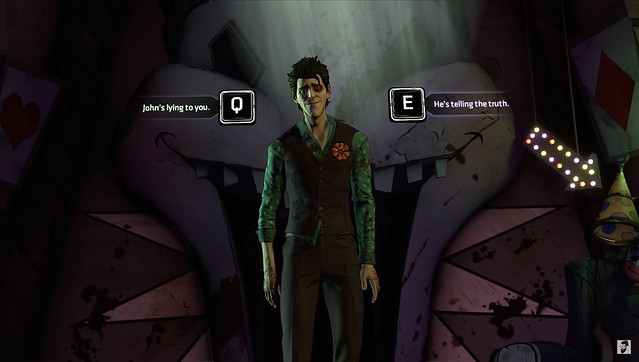 You can request from Waller to talk Harley down.

While you’re talking down Harley, if you bring up her dead dad then John will step in. You can give him some advice when he goes to talk to her.

Waller will attempt to move in on Joker and Harley. You can choose to either let Waller move in or tell her to wait. If you tell Waller to wait then Joker will apprehend Harley and get the virus. However, during the commotion Joker will refuse to give over the virus and will blow up the bridge to end the episode.

Alternatively, back at the fun house, if you choose not to trust John then he will leave and go to Harley and Bruce will show up at the bridge as Batman. YouTuber RabidRetrospectGames offers an alternative look at the ending.

In the alternative Batman path, you can choose to either rush Harley or sneak up on her at the truck.

Waller will talk Harley down and you’ll be able to either grapple the virus or the detonator. However, before Batman can do anything Joker will crash in and help Harley.

During the end sequence, Joker will blow up the bridge and Batman will only be able to save a few of the agents or officers — whoever you don’t save will die.

Joker and Harley will jump off the bridge together to end the episode, signifying that Batman will have pushed John into the breaking point and will have caused him to turn into the Joker. 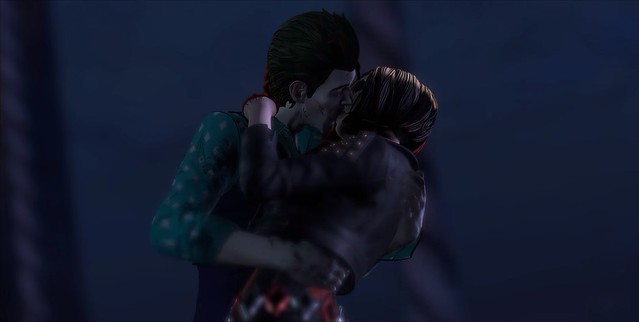 In the alternate start of the episode, if you betrayed Catwoman, then Bruce will go with the Pact and will prevent the blood bath at the SANCTUS laboratory.

Beat up the guards using the quick-time events and then take the elevator down into the laboratory.

Bruce will inform Waller about the virus and the Joker will overhear it. During the lab segment, Bruce will be able to talk to John about sabotaging the plan in order to keep Harley together with the group. If you suggest sabotage, John will remember that.

During the infiltration, you’ll have a choice to either save the scientist from Bane or save the guard from Mr. Freeze. Whoever you choose to help will upset either Mr. Freeze or Bane.

Follow the quick-time events to get inside the main terminal to retrieve the virus.

Continue to unlock all the slave terminals while Bane will attempt to break down the door and get inside the terminal room.

A quick-time event will play where Bane will fight Bruce and John. John will save Bruce and the Agency will show up to stop the Pact.

From here, much of the episode will play out the same as before, except instead of Batman interrogating Mr. Freeze, Bruce will be able to talk to Mr. Freeze.

The big difference is that Catwoman will have managed to save herself from the murder box and will have escaped from the Pact’s lair.

The remainder of the episode will pick up as usual once Bruce and Avesta investigate the lair and then encounter John in his dark place.