Pearl Abyss’ Black Desert Online is making the leap to mobile devices later this year. The MMO for iOS and Androids will be known as Black Desert Mobile. Recently there were details shared on what to expect from the upcoming, portable version of the popular, graphically rich hack-and-slash, non-targeting RPG.

For one, we learn that the starting classes will include the Warrior, Ranger, Giant, Witch and Valkyrie. Customization options for the characters will be similar but not quite as in-depth as the PC counterpart, meaning that you can alter facial features, change the length and style of the hair, along with modify aspects of your character’s body shape. They mention in the press release that if you can make a character on the PC version, you’ll be able to make that same character on the mobile version. However, the data files both games use are completely different, so you won’t be able to directly import your character from PC to mobile.

And speaking of PC-to-mobile… the game will not support cross-platform play. So if you were hoping to boot up your Galaxy S5 and do some field runs, some fishing, or some ore gathering with your buddies who play on PC, you can’t. 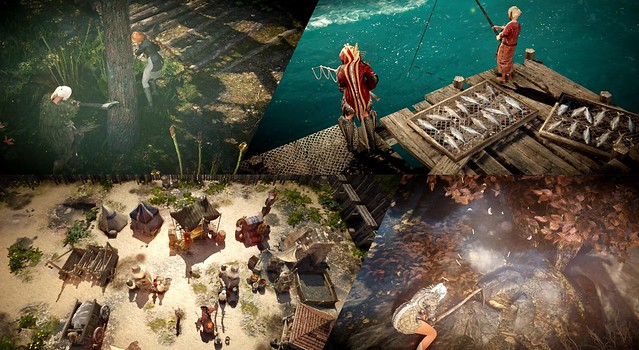 The main reason for the disparity in cross-platform play is because the two games play out very differently. Black Desert Mobile is more of an isometric, hack-and-slash MMORPG, where-as the PC version is a lot closer to the over-the-shoulder, hack-and-slash MMORPG. The way you perform attacks, combo your moves and battle enemies are chiefly distinct.

In fact, you can see how the game plays out with the gameplay trailer below, which gives you an idea of what the mobile version of the game is like.

Interestingly enough, it seems like this could be a nice little fit for the Nintendo Switch, if Pearl Abyss ever decided to port the mobile version of the game to Nintendo’s console.

Unlike the PC version, however, the mobile version of Black Desert will cut down on latency issues and slowdown by using multiple instanced areas, so you’ll only ever encounter people within the same instance as you.

The game will also support Facebook, Google and Apple accounts, so signing up and creating a player account should be a hop, skip and a jump.

You can look for Black Desert Mobile to launch later into 2018.