Firaxis Games is really rolling in the controversy now. The studio was originally hammered for uglifying a female Korean ruler in the upcoming Civilization VI: Rise and Fall expansion, which caught the ire of actual South Koreans because they felt she was incompetent in real life and made ugly in the game, and now they’ve upset the Cree nation residing in Canada.

CBC is reporting that Poundmaker Cree Nation Headman, Milton Tootoosis, was not too happy at how the Cree were portrayed in the game, despite being somewhat happy that they even made it into a game, given how little Cree are portrayed in media in general. Tootoosis told CBC…

“It perpetuates this myth that First Nations had similar values that the colonial culture has, and that is one of conquering other peoples and accessing their land.That is totally not in concert with our traditional ways and world view.”

“This is not new. Hollywood has done a job for many decades of portraying Indigenous people in a certain way that has been very harmful.”

“It’s a little dangerous for a company to perpetuate that ideology that is at odds with what we know. He was certainly not in the same frame of mind as the colonial powers.”

According to Chief Poundmaker Tootoosis, they were hoping that Firaxis had reached out first to inquire about the actual Cree before implementing them into the game.

While the real Cree nation come across as slighted due to Chief Poundmaker’s depiction as a colonial conqueror, they also hope that maybe some good can come of the situation so that can raise awareness to have a conviction of treason lifted from the former chief following the events of the 1885 North-West Resistance movement.

GamesIndustry.biz also covered it, with an indie developer chiming in on the comment section to suggest that while Civilization VI “is what it is” that other developers should be more conscious about how they include or depict other cultures in their games.

The trailer depicts Chief Poundmaker as a diplomat who could easily escalate things into aggressive action.

As noted in the trailer, Poundmaker and the Cree are portrayed more as traders and resource gatherers rather than fighters or conquerors.

One thing that the trailer highlights is that Firaxis did go out of their way to reconstruct the depiction of Korea’s Queen Seondeok. 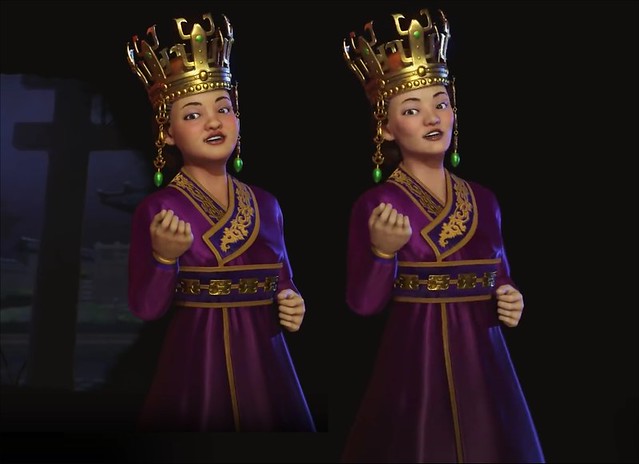 As you can see, they lightened her skin ever-so-slightly, reduced her weight, thinned her nose, highlighted the structure of her cheekbones, thinned her lips, accented the sharpness of her jawline, slanted her eyes, thinned the outcrop of her eyebrows, and overall made her look more Asian and less African-American.

It’s quite apparent that they took the criticisms from the South Koreans seriously given that none of them seemed to like what Firaxis had done with their portrayal of Seondeok.

Even more than that, many threatened not to buy the expansion or cancel their pre-order of the expansion because they felt FirAxis had tainted their country’s history by injecting Western feminist ideology into the portrayal of the former leader. They quite clearly told Firaxis to remove the SJW bent from Seondeok’s visual characteristics.

They still have until February 8th next month before Civilization VI: Rise and Fall releases on PC. I’m curious what other controversies they’ll be able to cook up in between that time?