A medieval, first-person, action-oriented, hack-and-slash game called Inferno: Deathfield is currently in development by Framing Inc., and is scheduled to be published by YJM Games. It will enter into Early Access two weeks from now.

At first glance it’s not hard to assume that it’s a first-person Bloodborne clone for the HTC Vive. I suppose, given the popularity of that game, it may not be such a bad comparison. The VR title sees players in the role of a chosen warrior tasked with stopping an outpouring of demons from the gates of hell using a variety of medieval weaponry, both melee and projectile-based, in order to defeat the evil minions of Lucifer and restore peace and order to the world.

Players will alternate between using swords and crossbows to take down the baddies. The combat is very fast-paced to be a VR title and requires some quick reflexes when it comes to stringing together combos and dodging incoming enemy attacks. You can see what the gameplay is like with the trailer below.

Gameplay wise, players will be required to utilize different attack patterns to defeat the different enemies within the game, not unlike Monster Hunter or other tactically-inclined hack-and-slash titles.

Graphically Inferno: Deathfield doesn’t look bad at all. The game has a slick, dark design as far as the architecture and weapons are concerned.

In fact, the lighting used for the weapons gives them a cool, domineering appearance as if they’ll shred the scales off a demon and shave the short and curlies off Satan himself. 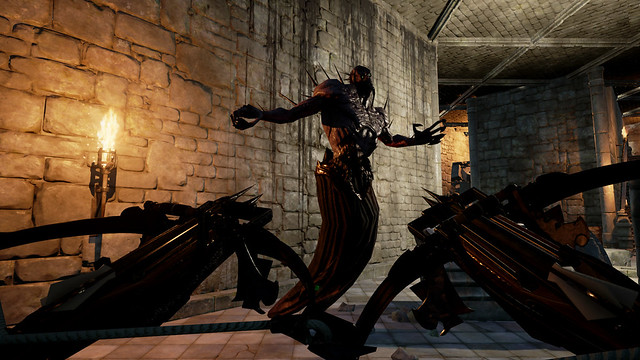 Much like Bloodborne, the game is steeped in difficulty. The developers make it known that the extreme challenge will mean that you’ll die over and over again in order to perfect your strategies and eventually clear the stage.

You’ll have a variety of skills to unlock along the way such as the ability to slow down enemy attacks, and utilize a dodge-slow skill that lets you get out of the way of incoming attacks.

To help encourage players to ramp up their skills even further there’s an Infinite Mode where players will attempt to rack up as many kills as possible in order to make it to the top of the world rankings.

As far as gameplay concepts are concerned, it’s nothing too original but as far as VR titles are concerned it’s basically the first really hardcore, medieval, action-RPG that’s designed to mimic the sort of gameplay that many PS4 owners loved about Bloodborne.

The game is scheduled to enter into Early Access first before fully releasing, and Framing plans on spending about four to six months working on Inferno: Deathfield before releasing the full thing for HTC Vive users.

You can keep track of the development of Inferno: Deathfield by visiting the Steam store page.