10Tons really seems to want to take their name to the next level. They think they’ll be able to do so with the new twin-stick, top-down arena shooter, Tesla Vs Lovecraft. The game is currently available right now over on the Steam store for $14.99.

The game puts you in the role of famed inventor Nikola Tesla, as he must build a series of inventions to combat the atrocities brought through a dimensional gate to the upper-worlds by none other than occultist, H.P. Lovecraft.

This sets in motion a vicious showdown in a series of violent confrontations between Tesla and Lovecraft’s minions, as the inventor attempts to stop the hordes of abominations and otherworldly creatures from destroying Earth.

Like many other 10Tons games, the gameplay centers around refined twin-stick controls where you run around taking down hordes of enemies across a variety of maps. There are, in fact, more than 30 maps to complete, each set within different parts of downtown Arkham.

Players will have a selection of different retro high-tech weapons at their disposal, mostly centered around Tesla’s arc-casting technology, where you can zap, pop and electrify enemies into puddles of pomegranate-colored goo.

You won’t just have guns at your disposal, though. Tesla will also be able to commandeer his own Tesla-Mech, which makes use of a number of his gadgets all rolled into one. The mech reminds me a lot of the mechs from Titanfall, as it’s available for a limited time, giving players lots of heavy fire power to unleash against the hordes of abominations and horrors. 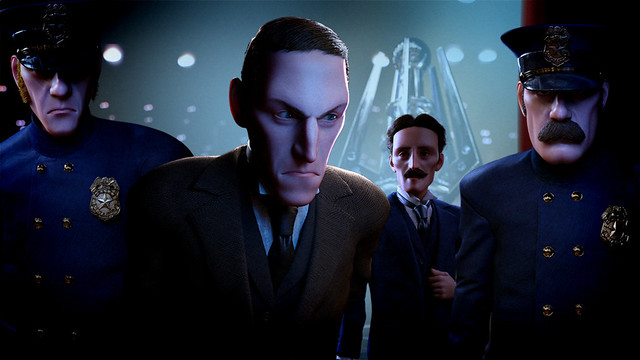 Tesla Vs Lovecraft has already gotten off to a pretty slick start over on the Steam store, garnering some very positive feedback from consumers.

If you enjoyed 10Tons’ Crimsonland then there’s a lot of similitude present with Tesla vs Lovecraft, but with obviously improved gameplay mechanics, upgraded visuals, and a lot more variety in level design.

The best part about it is that if you don’t have a capable PC but you do have a Nintendo Switch, the game will be arriving on Nintendo’s platform later in the year.

However, if you do have a capable enough PC and want to get in some game time with Tesla vs Lovecraft – which is currently discounted by 15% off during the first week of being on sale – you can do so by visiting the Steam store page.