In today’s Puritan-driven media, propped up by third-wave feminism and the Intersectional Inquisition, it’s considered taboo to have sexy females in video games. If you include a big breasted woman in your game, expect to be shunned or called out by today’s politically-zealous pundits. If you include fan-service or sexy outfits in your game and make it a selling point, expect the social justice community to get antsy and offended and castigate your game throughout the social media circles. Well, SNK’s SNK Heroines is no exception to today’s rules about sexuality and fan-service, and Game Informer made it a goal to put that issue front and center in a recent interview.

There were two questions out of 11 that were specifically geared toward how women are depicted in video games today. The interview was with SNK’s producer, Yasuyuki Oda, and it was published on February 9th, 2018, alongside the release of a new trailer for SNK Heroines showcasing a sexy collage of alternate costumes for some of the characters.

It’s funny that Nintendo changed the thumbnail for the video above, because originally it was Mai in her two-piece cow bikini, bending over and giving everyone a good view of her bountiful assets.

Speaking of assets, Game Informer decided to put Oda-san on the spot by trying to force him to justify the fan-service in SNK Heroines…

Oda: There is exposure of female parts, but we don’t feel like it’s overly sexualized. It is there, but we want to push the cute aspect of things, the elegant-ness of the women, and we feel like we are able to cull the people that would bash this game for there being too much exposure.”

This question in particular caught the ire of even Game Informer’s own readers, because as one of them pointed out: Has Game Informer ever asked Rockstar why they continue to make games that contain violence or killing people as a prime gameplay mechanic in their open-world action titles?

“We literally make games about people killing people. Would you have an interview with Rockstar and ask them, “why, in 2018, with all the gun violence, did you decide to continually support a game with guns and indiscriminate killing?””

It’s a good question that juxtaposes the topic of violence and sexuality, and how the media – under people like Anita Sarkeesian’s influence – have made it taboo in gaming to celebrate sexy females. 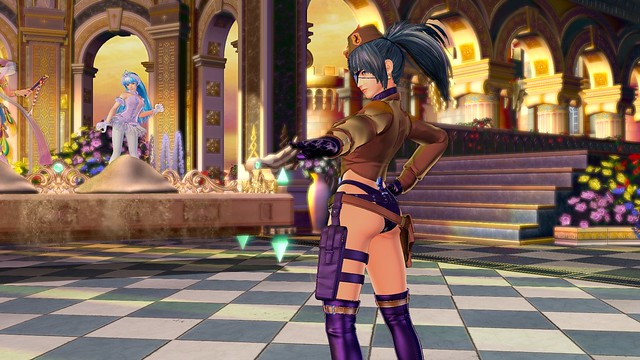 As another commenter pointed out, Netflix, Showtime, Amazon and HBO are filled to the brim with shows and movies that have plenty of nudity in them featuring sexy women, yet somehow it’s a crime if video games do it.

The Game Informer interview, however, attempted to pose one of the questions as a matter of context and continuity, claiming that some of the characters aren’t known for exposing their skin, and how SNK accommodated for this…

“Game Informer: Do you feel like that the game, with reference to sexuality, tends to respect the characters? Mai has always been a very sexualized character, but for example Leona hasn’t. She’s been a very stoic character, and yet in this game she’s wearing a catsuit in a thong. What would you say to a fan who has loved that character for years, but sees this and doesn’t jive with what they know of that fighter?

”Oda: There’s a reason they’re wearing these costumes. They’re not just wearing these costumes because we wanted them to. There’s a full story behind it which we can’t really go into details about at this moment, but if you play the story I think our fans would better understand why they were put in this situation. We made an effort to make sure the image of our characters will stay the same, even after people play this game.”

It’s true that there is a reason for them wearing those outfits. Some investigative gamers figured out what the story is behind SNK Heroines, and it involves one of the villains from King of Fighters XIV capturing the females in hopes of turning one of them into his bride by having them compete while trapped in his castle.

Nevertheless, some users pointed out that this was a highly hypocritical line of questioning given that games like Mass Effect: Andromeda and certain visual novels like Ladykiller In A Bind sexualized its characters but because it was done from developers pushing the “right” kind of politics, therefore that kind of sexualization was deemed okay.

In fact, Game Informer had a glowing paragraph of praise for Ladykiller In A Bind, writing the following about the title in a feature about sex and intimacy in gaming that was published on November 23rd, 2017…

The site also glowing paid lip-service to Mass Effect: Andromeda’s romance and approach to sex ahead of its release in a glowing editorial published on November 18th, 2016.

Some of the people in the comment section on the SNK Heroines piece attempted to disingenuously deflect by stating that different authors have different opinions at Game Informer, but all the opinions about games with fan-service geared toward males have been negative. Kyle Hillard, for instance, had this to say about Dead or Alive Xtreme 3 not being released in North America in a post published on August 2nd, 2015…

“With no intentions to bring the game to North America, it seems the market for this bizarre off-shoot has evaporated stateside, which is probably for the best. The first one was novel in a, “I can’t believe this exists!” kind of way, but I can’t imagine anyone is clamoring for a third game in America.”

Hillard’s comments turned out to be vastly off the mark, as Dead or Alive Xtreme 3 was one of Koei Tecmo’s best selling games in 2016, and it ended up breaking all of Play-Asia’s previous sales records, as reported by Gamenesia, proving that Americans do still enjoy sexy women.

But we’ve seen this kind of consistency from media outlets since around 2012, where sexy women in games are decried and put down with assiduous fever. Even when Dead or Alive Xtreme 3 didn’t release in the West, journalists still attacked it for having a VR mode, calling it “sexual assault”.

Of course, there’s a homogeneity of opinions circulating throughout the gaming media, and wider media at large, propagating the view that any kind of content geared toward straight males is bad, and anything approved by third-wave feminists is good.

SNK Heroines is due out for Nintendo Switch and PS4 later this year.

(Thanks for the news tip randomanonymouse)