Inkle’s Heaven’s Vault is an upcoming game for the PlayStation 4 and for Steam on PC. It’s an adventure game about an archaeologist named Alya Elasra who sails to Nebula alongside a robotic sidekick in order to discover and decipher the lost language of the ancients.

Jon Ingold, the narrative director at Inkle, explained in a blog post over on the PlayStation Blog that they weren’t just satisfied with typical adventure game puzzles where you fit a block into a hole or slide around some puzzle pieces to solve a logic equation. Ingold explains that they decided to create an all new language in order to give gamers something truly foreign to figure out.

“The ancient glyphs you’ll encounter as you explore all have meanings. These meanings combine into words, and the words form the fragments and phrases you’ll find inscribed on the scattered artefacts and ruins of the Nebula”

Sounds interesting, eh? Well, there’s a trailer that showcases how the language system works and what tools will be afforded to players in order to decipher the language.

Much like Campo Santo’s In The Valley of Gods, the gaming community was not having any of Inkle’s Heaven’s Vault. The trailer has only been up for hours but it’s already getting downvoted with focused determination from people who are making their voices heard both figuratively and literally.

The comments are a lot harsher than the like-to-dislike ratio. After a couple of people mentioned that it looked interesting, it was made apparent that the crowd who stands firmly against the Intersectional Inquisition were having none of what lies beyond Heaven’s Vault.

Others repeatedly called out Heaven’s Vault for being social justice propaganda. One person even stated that it’s Anita Sarkeesian’s dream game given that the protagonist is covered from head to toe, wears loose fitting clothes so as to appear physically androgynous and even wears a hijab to cover her head, ensuring that no aspect of her comes across as physically attractive or enticing to males.

A majority of people simply don’t like that the game has choppy walking animations, while another big portion are turned off with what they call “Tumblr” art-style. A few more dislike the idea that the protagonist is middle-eastern. One person did like the flying part where the main character travels around the world.

Even the typically pro-fanboy community on the PlayStation Blog weren’t entirely convinced. Some did mention that the game looks interesting but others commented similar reservations to what was mentioned on the YouTube channel about the animations looking disorienting.

This kind of pre-release pushback has been steadily growing in the gaming community against games that are perceived to be agitprop. We saw this as well with In The Valley of Gods, where gamers called it sociopolitical propaganda because they believed it was another tale about two strong, independent black lesbians, a common trope in many games designed by Liberal game makers. The developers at Campo Santo publicly reproved the community comments about the game, stating that it wasn’t about black lesbians… but gamers still aren’t convinced. 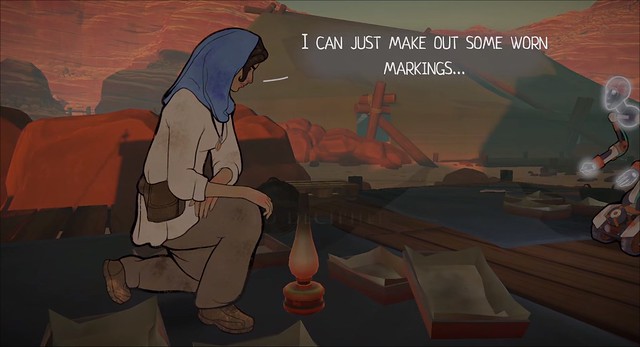 At this point, any developer attempting to make a sociopolitically-charged game is going to have to deal with a serious uphill battle given how jaded the gaming community has become after nearly four years of non-stop harassment from those on the Left about how evil straight white males are and how much the industry hates its largest market demographic. At this point, any developer even perceived to be associated with making games for Leftists seems to be on the receiving end of gamers who are absolutely fed up with the political shenanigans they’ve had to put up with over the last half decade.

Heaven’s Vault will be demonstrated first at GDC this March, followed by a second public demonstration at PAX East in Boston, Massachusetts this upcoming April.