THQ Nordic is making good on the IP they picked up from the original THQ, which filed for bankruptcy back in 2011. THQ Nordic has decided to cash in on popular properties from the seventh generation of gaming, in particular the destruction-heavy, third-person shooter Red Faction: Guerrilla.

The remastered edition also features improved shadow rendering, improved light renders, improved shaders and post-processing, along with overhauled textures and specular maps so that the game will have a cleaner and sharper look. 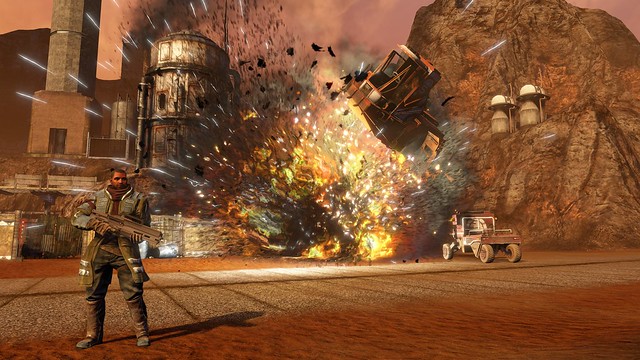 It doesn’t sound like anything will change with the story content, and it will still focus on a resistance group rising up against the oppressive regime of the Earth Defense Force.

Players will be able to use melee weapons and projectile weapons to deconstruct various aspects of the environment.

Tunneling through the geometry isn’t possible, just about every building, every tower, and every structure in the game can be destroyed.

THQ Nordic is also reviving the multiplayer in Red Faction: Guerrilla Re-Mars-Tered Edition. You’ll be able to engage in a number of PvP modes across the game.

The original game was a decent amount of fun in an open-world sandbox. You could commandeer vehicles, blow people off cliffs, scale towers and then destroy them, or bop people over the head with a hammer.

I don’t know if upping the graphics fidelity in superficial ways will make the game more fun, but it would be nice if the physics were slightly improved and the destructibility was more varied.

Anyway, you can look for the remastered version of Red: Faction Guerrilla to make its way to the three main gaming platforms sometime this summer. There’s no word if PC gamers who already own the game will get a free upgrade, but if that’s the case it will definitely make it a lot more enticing.