It’s been brought to our attention by YouTuber Scratch Point that Crunchyroll, the current localization publisher for the Western release of the mobile game DanMachi Memoria Freese, has deleted the YouTube video that advertised a feature that they later censored from the Western release. Crunchyroll opted to delete the video after gamers and anime fans began reporting the company to the Federal Trade Commission for falsely advertising a feature that was not present during the release of the game.

There’s a video of the update from Scratch Point that you can view below, which also contains footage from the original trailer that has been deleted.

Crunchyroll’s community team followed up requests for the return of the feature by stating that they removed the feature due to a “unique” decision made by their partners.

We’re sorry for any miscommunication around the DanMemo release. This was a unique decision specifically for the game made amongst partners with audience and distribution considerations in mind.

Crunchyroll was also called out for deleting the trailer and removing evidence of the false advertisement. The original video was uploaded on November 7th, 2017. 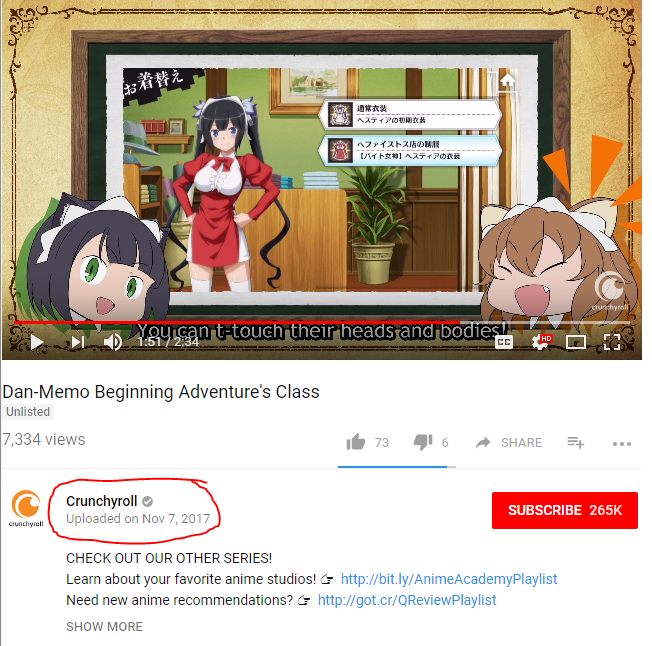 If you attempt to view the trailer you now get a message showing that the video has been deleted.

The community team stated that they removed the trailer to prevent any confusion about the feature being present in the game.

We wanted to make sure there was no further confusion. We’re sorry for any miscommunication around the DanMemo release. This was a unique decision specifically for the game made amongst partners with audience and distribution considerations in mind.

Thankfully, other YouTubers managed to keep a copy of the video online so that gamers can see exactly what had been advertised for the Western release of DanMachi Memoria Freese since November 7th, 2017. The game released this spring for iOS and Android devices. The trailer below was re-uploaded courtesy of Azarioplays.

The head-patting and body-touching feature was taken out of the Western release of the game without any word about its removal. Gamers only found out when they discovered the missing feature after they acquired the game and attempted to use it.

Crunchyroll’s team stated that it wasn’t censorship but that they were simply removing it due to what the localization team deemed appropriate for Western audiences. On April 6th, 2018 the PR team stated…

“Hi! Official DanMemo Community Team here. The “touching” feature was removed from the English version of the game, yes. Not as a matter of censorship or depriving non-Japanese audiences of anything, but due to what is appropriate and not appropriate for English audiences. Hope that answers your question!”

This is actually illegal in many regions, including the United States, where Crunchyroll heavily advertised the release of the game. This falls under both a failure to disclose the lack of an advertised feature, and a bait and switch advertisement that lured in consumers with the promise of a feature that was not present.

Many gamers have been filing complaints for false advertisement following the release of DonMachi Memoria Freese, by contacting the appropriate consumer trade commissions.

If you live in the United States you can contact the Federal Trade Commission using the complaint form.

If you live in Canada you can use the Advertising Standards Canada complaint form.

If you live in the United Kingdom you can use the Advertising Standards Authority complaint form.