3rd Eye Studios released a new 17 minute video for the upcoming sci-fi thriller, Downward Spiral: Horus Station. The game is due out for PC, PS4, and Xbox One, and will also receive VR support for the HTC Vive and Oculus Rift.

The video is captured from a demonstration that the developers held at this past year’s Game Developers Conference in San Francisco, California. You can check out the gameplay video below, ahead of the game’s release this spring.

The video starts with the player moving through a hub, and then making their way through some narrow corridors.

The lighting here is impeccable – lots of red hues and strumming light noises.

A cool sequence takes place where the player has to scale around an arching passageway to acquire a grapple gun. The visuals are really distinctive here because it gives you a good impression of the retro-future tech that 3rd Eye Studios is going for.

The zero-g atmosphere lends itself to various puzzles that must be solved by grabbing items and powering up systems, flipping switches, and pulling levers. 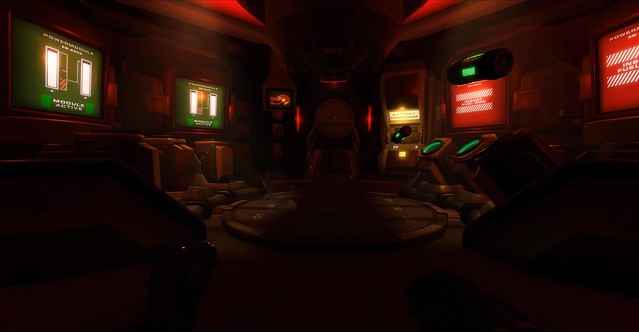 We see that you’ll need different items for different tasks. A nail gun to disable rogue security droids; a grappling hook to quickly navigate the environment; energy capsules to power up the consoles; and light sticks to illuminate passageways.

You’ll have to acquire keycards and tape drives, travel through the various station hubs, and avoid getting killed.

One nice thing about it is that the player-model has hands. It’s great to know that the interactivity isn’t shortchanged with disembodied hands.

The art-style is themed around lo-fi 1970s science fiction movies, so if you dig that sort of aesthetic you might enjoy Downward Spiral: Horus Station. You can learn more about the game by visiting the official website.