The J-Deite RIDE is a transformer. No, it’s not officially licensed by Hasbro, it’s an actual transforming sports car. It goes from a two-seater sports car into a bipedal, 12-foot tall mechanized robot. This is not a joke. It’s real.

The J-Deite RIDE was conceptualized by Brave Robotics CEO, Kenji Ishida back in 2015 but has become a reality in 2018. The vehicle takes about a minute to transform from a two-door sports car into a 3.7 meter mech. Kazumichi Moriyama captured the transformation process, which you can check out below.

Japanese tech site, PC Watch, has a detailed breakdown of the vehicle’s operation and design, which includes plenty of screenshots of the transformation process.

The J-Deite RIDE is a two-wheel drive sports car that clocks in at 1.7kg, or around 3,700lbs. It’s a battery-powered vehicle with speeds averaging up to 60km/h, or just a little under 40mph. 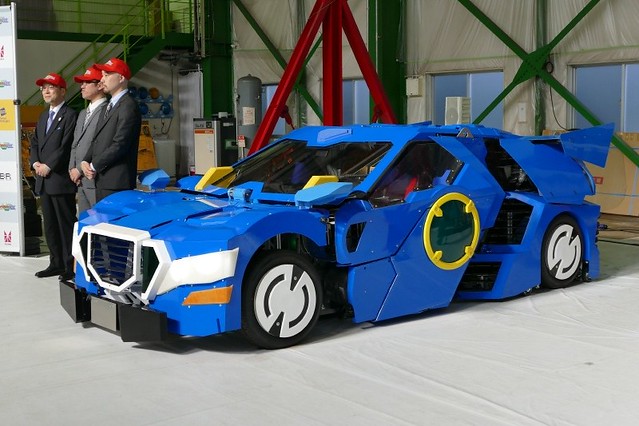 It’s explained in the article that it functions much in the same way as many other electric cars, but you can get about three hours of functionality out of the battery. Given how slow the mech walks, I imagine you won’t be going very far in the mech mode.

You can see for yourself that the vehicle can drive a little bit, thanks to a fancy promo video from Japanese YouTube outlet, Robot Start Corporation.

So how much does it cost? Well, there’s no price given and Ishida didn’t really intend for the J-Deite RIDE to be anything more than an “expensive toy”, according to a report by Reuters.

In fact, he told the outlet that it was anime that helped inspire him to design the mech, and he hopes that a real-life transforming mech will inspire other creators to do the same…

“I grew up believing that robots had to be capable of such things, which became my motivation to develop this robot”

Ishida told PC Watch that the next step is to develop a transforming mech that can go from a bipedal robot into a flying vehicle, much like Macross or Thexder.

There are probably a lot of anime fans the world around pooling together funds in order to purchase a J-Deite RIDE for themselves. I can’t imagine the mech aspect being very useful other than to maybe stand up and walk out of rush hour traffic, but otherwise it’s more form over function.