Super Smash Bros‘ roster for the Wii U just got a little bit bigger… and a lot more alluring. Pyra from Monolith Soft’s Xenoblade Chronicles 2 is currently available as a mod for Super Smash Bros.

The mod was put together by DemonSlayer8, better known as DSX8. You can download the Pyra mod right now from over on the GameBanana download page.

DSX8 did the rigging and importing into Super Smash Bros, along with fixing the materials and working out her… physics. 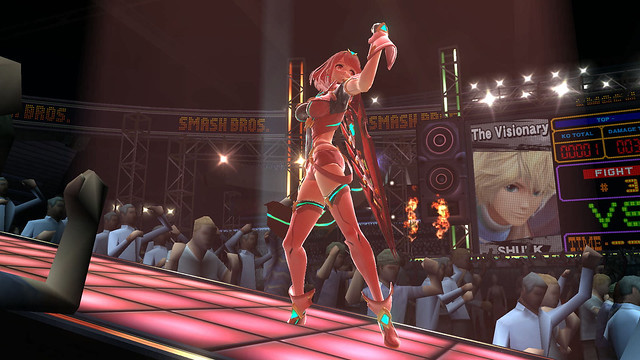 The mod clocks in at just 4MB, and features a voice mod, swinging bones, eyes, metal and more. DSX8 took some extra time to improve the knees and elbows, along with ensure that mouth and eyes didn’t glitch. You can see what the finished mod looks like in action with the video demonstration below.

DSX8 is already hard at work on his next mod, which is for Lyn from Fire Emblem. However, if you’re more-so into Xenoblade Chronicles 2, the news about Pyra being available is probably music to your ears.

Given that Monolith Soft’s artists made Pyra look hot and sexy with plenty of curves and big jiggly boobs, it of course attracted plenty of negative attention from SJWs, who went out of their way to attack Xenoblade Chronicles 2. Not only that but Social Justice Warriors purposefully glitched the game in order to make an argument about the way the women were designed in the Nintendo Switch exclusive, but thankfully the SJWs were called out for their calumny and put in their place by real gamers.

Xenoblade Chronicles 2 also went on to sell quite well, proving that SJWs are basically all talk and no show.

If you want to further keep you hands on Pyra, you can do so by grabbing the mod for the emulated version of Super Smash Bros for the Wii U.