XSeed Games and WayForward announced that a physical release of Shantae: Half-Genie Hero will be released for the Nintendo Switch on May 8th for $39.99. The limited release is being called an “Ultimate Day One Edition”, which comes with a 30-track CD featuring the game’s soundtrack, a 100-page art book, and all of the game’s previously released DLC, including the “Pirate Queen’s Quest, “Costume Mode”, and the “Friends Mode”.

This ultimate pack is being called the Shantae: Half-Genie Hero Ultimate Edition, and it’s only going to be available for those Nintendonites who own a Nintendo Switch.

The DLC features some sexy new gear for for Shantae and her friends, along with new weapons and tools to make use of as well. The Costume Mode adds three new adventures along with three new costumes, such as the officer outfit, the bikini outfit, and the ninja outfit.

It’s easy to forget that this was actually a crowdfunded game. It looks better than a ton of other big-budget titles, and Wayforward’s animations are some of the very best in the business. As you can see in the trailer, though, each of the new outfits come with all new abilities, including some big, bouncy… beach balls. 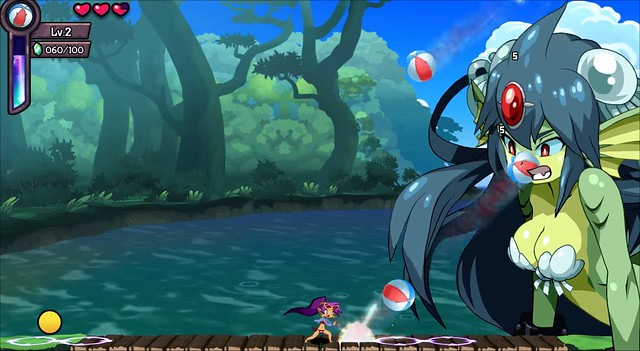 The ninja outfit adds the ability to cling to the sides of walls, allowing Shantae to scale up vertical inclines like Samus or Mega Man X.

The Friends Mode DLC puts players in the role of Sky, Bolo and Rottytops as they traverse through Shantae’s nightmare in order to save the genie in distress.

Digital versions of the ultimate edition will be available for PS4 and Xbox One, but it’s the Nintendo Switch owners who get the real good stuff.

Thankfully, Shantae Half-Genie Hero sold well enough to prove that solid gameplay, great animations, and a sexy lady in the leading role is still in demand from core gamers.