Namco producer Katsuhiro Harada let loose some fantastic news for Tekken 7 owners, revealing that whether you’re on the PS4, Xbox One or PC, you can look forward to some free DLC starting May 31st.

The DLC will be headlined by New Japan Pro Wrestling content, along with unlocked story mode costume sets for player customization, and additional content being made available at the end of the month at no additional charge.

To TEKKEN community.
Update of FREE Content will be released (May 31).
Story Mode Costume Set, Player Customization Set, NJPW Pro-Wrestling Set, and other content will be available for free!
Please refer to the image. pic.twitter.com/Whfv2ALlho

As you can see, some of the new customization sets include new wavy ponytails and bob hairstyles for the females, three brand new face-stamps, three new NJPW t-shirts featuring the Bullet Club, Kazuchika Okada, and Kenny Omega, as well as nine all new character select panels designed by the Bandai Namco Studio artists.

Certain existing items will also be available in a silver livery, while four new outfits will be available for Kuma and Panda.

But that’s not all! There’s more! 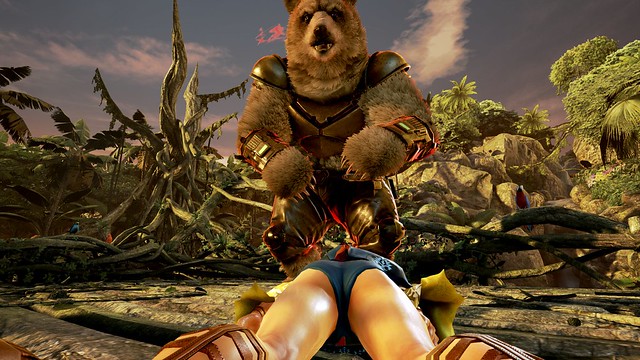 Last but not least are the four new player customization sets that will be available in the customization section, featuring the vagabond set, the evil eye set, the final battle outfit, and the blood vengeance outfit.

There’s also a late Christmas swimsuit set that will be available including a fundoshi, a santa bikini, and a Christmas onesie.

All of this free content will be available as part of the one-year anniversary for Tekken 7.