American Girl has been around since the 1980s. The company offers various collectible dolls for young girls to play dress-up with and accessorize with the latest fashion trends. Hilariously enough, as part of Microsoft’s efforts to further reach out to young girls – as noted by Phil Spencer during his E3 Coliseum discussion – they’ve teamed up with an unlikely ally in order to get more girls interested in gaming.

In particular, Microsoft teamed up with the American Girl company to offer consumers a miniature Xbox One S (because obviously, most young girls just can’t get into a vanilla Xbox One and absolutely need that 4K Blu-ray drive option and HDR support for media playback), along with two fake games, a headset and a gamer chair.

Game Informer did a quick write-up about the new American Girl Xbox Gamer accessory set, which is currently available to purchase from the American Girl online store for $50. 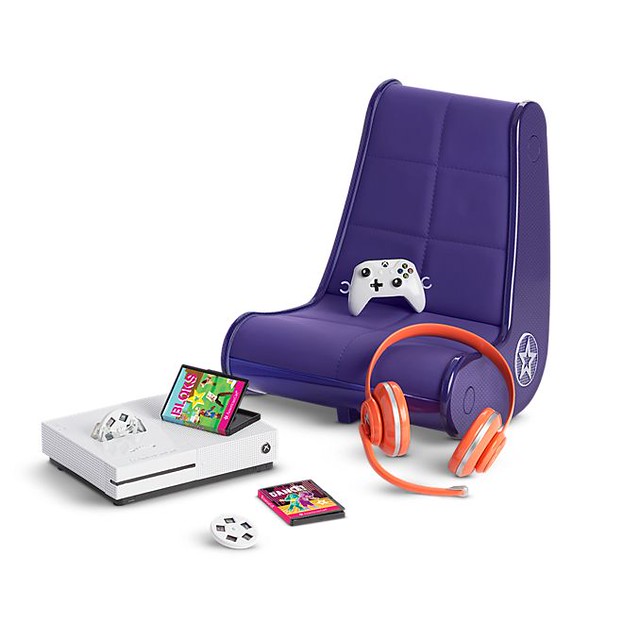 None of the accessories work, and they don’t come with the dolls pictured in the images above.

The Xbox One S comes with a white Xbox One wireless controller that the dolls can hold, along with a miniature chair with a 3.5mm plug that can actually hook into a media device and play music or sounds, and two game discs that you can place into a miniature projector on the Xbox One S to display the fake games “Bloks” and “Dance”.

It would be remiss for me to lackadaisically skip over the fact that the projector does actually work and it does display 10 different images from the two fake game discs. 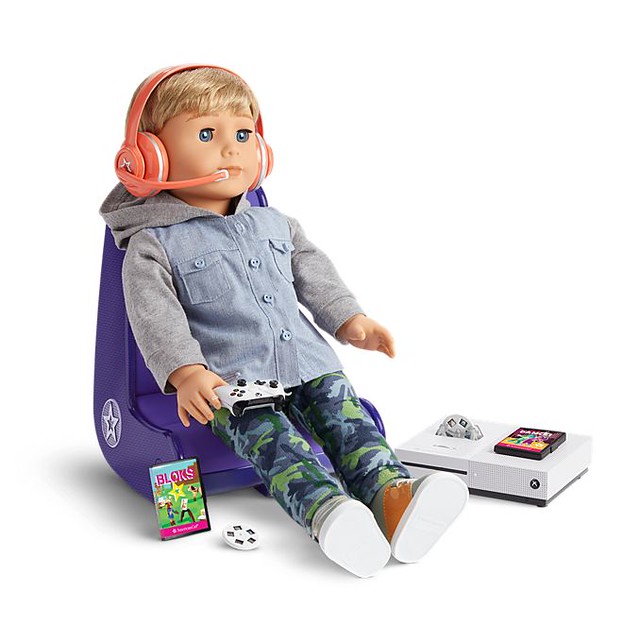 Of course, this poses the most obvious question of them all: Who the heck is this made for?

I can’t imagine little Timmy browsing through the American Girl catalog, rosy-cheeked and wide-eyed, begging mama and papa for the latest Felicity Merriman doll just so he can outfit her with some Xbox paraphernalia. Just the same, I can’t imagine little Jane begging mama and papa for a Julie Albright doll just so she can plop her in a gamer-chair and wireless headset.

That’s not to mention that the little rugrat in that image up above looks more androgynous than the sexually confused K-Pop band, Seventeen.

And before you make the mistake of some of your fellow peers and start fixing your zipper for a night full of scotch and a morning full of regrets, just know that all those pretty faces in that gif above belong to men…. or at least, they’re supposed to be men.

Even on the Game Informer page the commenters couldn’t make heads or tails of who this particular piece of collectible gear was supposed to be attracting.

Someone should let krimhorn know that most young girls really couldn’t give a hoot about the Xbox One S, but I feel that something fragile and irreplaceable might break inside… like their sanity.

Anyway, the set is available right now for $50. I have no idea which demographic this is supposed to be courting because I don’t think I’ve ever seen anywhere little girls clamoring for dolls to have dude-bro gamer-gear accessories adorning their fashionably pristine doll collection. But who knows? Maybe this will be a hot seller. I just wish I could see the sales stats for this set in the next quarter.

(Thanks for the news tip Divine Providence)