[Update 6/17/2018:] It was revealed that this push for diversity in mostly male-centric games is part of a social engineering initiative called “Women in Gaming” by Facebook, which is a global effort to increase diversity and inclusion among game studios and in the actual games.

[Original article:] Microsoft revealed The Coalition’s latest Gears of War game, Gears 5. The game makes no qualms about what sort of agenda the company has its core, replacing the male leads with the female character from Gears of War 4.

As many of you know, Gears of War has always been a testosterone-laced, hardcore, gory, steroid-fueled, third-person shooter with chainsaw massacres and plenty of locker room talk from the mostly refrigerator-sized all-male leads.

This time around, The Coalition decided to feminize the entire thing — yes, they feminized probably the most masculine gaming brand on the market — replacing the already weak and pathetic J.D. Fenix from Gears of War 4, with his girlfriend Kait Diaz.

The announcement trailer appears to promise a more “emotional” story, as Kait will go on her own independent journey away from J.D., and the others. You can check it out below courtesy of NRMgamingHD, which was posted up during the Microsoft Xbox E3 press conference.

The story picks up some time after the events of Gears of War 4, where it ended with Kait having to kill her mother, who had become part of a mutant hive.

Kait has some sort of connection to the Locusts, as depicted in the trailer above, and she decides to branch off on her own to go off on her own adventure.

The trailer depicts a couple of new features in the game, such as new ice-gliding vehicles, new bosses, and new enemies as you go on a journey of Kait’s self-discovery.

I never thought Gears of War would go full Social Justice Warrior, but they did.

What really stings is that  The Coalition finally evolved J.D., from Gears of War 4 by taking J.D. Fenix off his soy diet and injected him with some testosterone laced balls for Gears of War 5, but then decided to swap him out to make gamers play as Kait Diaz instead. It’s unfair. 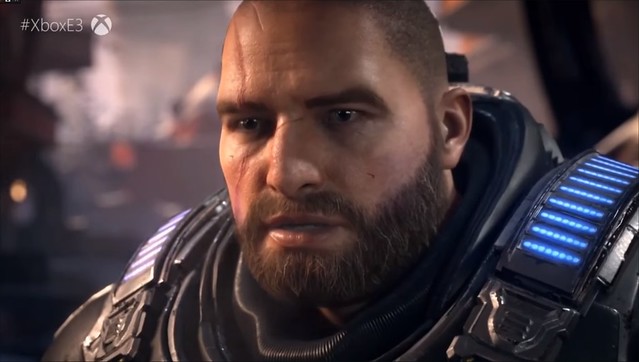 It’s amazing that Microsoft and The Coalition decided to take the most testosterone-driven, male-centric third-person shooter brand on the market and still find some way to inject it with third-wave feminism, as opposed to just making a new IP.

Apparently no franchise is safe from the diversity-driven, SJW influence; and if you just want to kick back and play something hardcore, violent, and gritty, you can’t these days. Everything has to be part of the millennial “Progressive” agenda even if you don’t care about that stuff.

I’m almost shocked that Microsoft even confirmed that you still get to play as Master Chief in Halo: Infinite… and that he’s still a male!