There was a time when most of the sociopolitical banter from major gaming websites was tolerated by the majority of readers.

When outlets complained that fictional game characters had breast that were too big and their clothing attire too sexy, the casual audiences reluctantly agreed that the games needed more realistic portrayals of female characters doing unrealistic things in completely surrealistic environments. And when outlets complained that more women needed to be represented in typically male dominated gaming franchises, various casual communities reluctantly agreed that adding more women to games that women have statistically rarely ever played would help bring more women into gaming (news flash: adding more playable women to action games did not bring more women into gaming nor did it help increase sales).

Nevertheless, IGN is sticking with the narrative that by taking mostly male-oriented franchises and trying to refocus them on female characters and stories, it will help make the property more inclusive.

In an article published on June 25th, 2018 titled “Why WWE 2K19 Should Have Featured a Female Superstar on the Cover”, IGN’s Leah Williams puled over WWE’s decision not to have a female athlete on the cover. Williams attempted to make a case why they should have given the cover athlete position for WWE 2K19 to one of the female superstars instead of the workhorse that is AJ Styles, a man who is considered to be pound-for-pound the greatest living pro wrestler on the face of the planet. Leah Williams writes…

“WWE has a long, deserving list of women’s cover stars, all of which have contributed to breaking down barriers for mainstream women’s wrestling. Both Charlotte and Asuka come to mind as perfect contenders to have featured on the cover of WWE 2K19, along with less likely superstars like Carmella, Sasha Banks and Alexa Bliss.”

“Featuring Carmella on the cover could have been the ultimate, infuriating accomplishment to cap off Carmella’s fabulous last year.”

Leah also cites Sasha Banks as a potential cover athlete, even though Sasha hasn’t won any significant matches in months, is out of title contention, and is currently embroiled in a lukewarm feud with Bayley.

The only other credible superstar who could have been the cover athlete is Asuka… IF Asuka had still been undefeated or at least won the Smackdown Women’s Championship at this past year’s Wrestlemania. But she didn’t. In fact, Asuka has been losing to Carmella on the grand stage, making it another head-scratcher why she would be on the cover.

Why would you reward a superstar with a cover athlete spot for being a failure?

Ultimately, it makes you wonder why there’s a push for equality of outcome as opposed to equality of opportunity. Well, according to Williams, it’s because it’s the politically correct thing to do, writing…

“Alongside a brand new MyCareer overhaul, and access to previously unavailable matches such as the Royal Rumble, an equality-centric WWE title feels both necessary and overdue. While we can always look forward to next year’s offering, it’s a shame that this year appears to be a case of history repeating.”

Or maybe they wanted a champion on the cover?

According to WrestleTalk, the reason AJ Styles retained at Money in the Bank was because they wanted him as champion when they unveiled him as the cover athlete for WWE 2K19.

Shayna is legit and the best out of the three, but she’s still green and just getting started. She also hasn’t had many matches under her belt and isn’t quite on the level of being over enough to be a cover athlete… yet. The other two are all looks and very little skill; and most core wrestling fans aren’t thrilled that either Bliss or Carmella are champions.

It would be insulting to have either Alexa Bliss or Carmella as cover athletes over a wrestler who has been carrying the company on their back for the past year… which is something AJ Styles has been doing night in and night out since becoming champion in 2017 (unlike Brock Lesnar).

Thankfully, IGN’s readers were savvy enough to realize that the article was nothing more than gender-divisive, sociopolitical bait. Teamed209 is correct, majority of gamers who are into sports games are males.

According to a research study from Concordia University professor Mia Consalvo, 98.4% of gamers who play sports games are male. The findings of the study were discussed in an article published on Science Daily.

These figures are vastly different from the percentage of female sports fans who actually watch and attend sporting events, which Demographic Partitions puts around 30% through 37% across the PGA, NFL, MLB, NBA and NASCAR.

So basically, sports video games are catering to an even smaller female demographic than those who watch the sports on national television or attend the events in person.

Nevertheless, there were a few people in the IGN comment section convinced that representation could turn things around, and could potentially become a big hit for the women.

Some might say that it’s a non-issue either which way, and that it doesn’t matter if a male wrestler or female wrestler is on the cover. However, as SuperCrazyNinja and BceBears2 point out, it’s about putting the most popular person on the cover to increase sales with the people interested in the product. And as pointed out above, a large portion of females aren’t interested in sports games.

That’s not to mention that promoting a game to potentially millions of fans with superstars who aren’t that popular or who aren’t that over makes zero sense from a marketing perspective. As one user pointed out in the IGN comment section, the only female who has mainstream appeal right now in the WWE is Ronda Rousey. And take note that Rousey has also previously been a cover athlete for the EA Sports UFC games due to her undefeated streak in mixed martial arts competition.

Simply put, Rousey earned her spot on that cover. 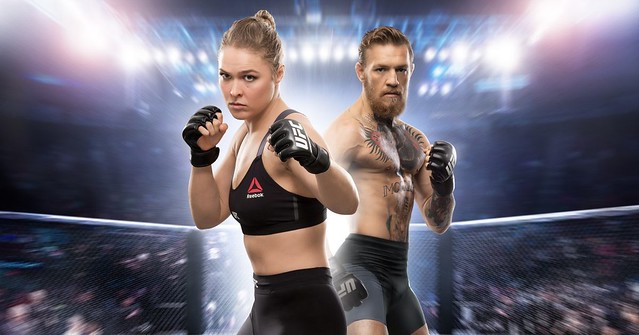 However, in the WWE, Ronda has only been involved in two televised matches, and it would be a slap in the face to the other full-time workers if the newbie was front and center without having paid her dues.

But more importantly than anything, the cover needs to represent a game that’s actually fun to play. As one IGN user pointed out, there’s no point having anyone on the cover if the game isn’t good.

Trying to focus on paying lip service to sociopolitical activism is the last thing that Yukes, Visual Concepts and 2K Games need to be worried about right now. What they need to do is focus on retaining (and growing) their core demographic. AJ Styles being on the cover is one step in respecting the hard workers of the business, but they also need to respect the fans when it comes to gameplay quality, customization depth, online stability, and improved playability.

(Thanks for the news tip The Protagonist)