Nintendo’s Mario Tennis Aces is now out and available exclusively for the Nintendo Switch. The game may center around the single-player bouts and multiplayer matches, but there’s actually a built-in story mode that accompanies the hardcore action as well, and for those of you looking for a gameplay walkthrough guide to help aid you in the Mario Tennis Aces journey, you’ve come to the right place.

Youtuber RabidRetrospecGames has the full three hour gameplay playthrough of the Adventure Mode, which you can check out below.

The Adventure starts off with a cinematic involving Mario and Peach teaming up against Bowser.

Waluigi and Bowser tempt Mario with a special racket, and Luigi ends up grabbing it, which opens up a portal and sucks him up, which results in Mario going after Luigi.

Toad explains that the racket comes from Bask Ruins, and Toad and Mario head to the desert.

If you want to go back to the main menu to access the other modes just press the minus or plus -/+ to go back and select the other free play modes.

Once they get done talking, proceed across the world map to Bask Ruins. Mario will have to beat Drybones in a tennis match.

You’ll learn the basics of the gameplay controls using ‘A’ on the Joy-Con controller to toss up the ball, and press ‘A’ again to serve.

You can then press ‘A’ again to return the volley after an opponent hits the ball.

Use the left analog stick while pressing the face buttons to steer the ball direction during serves and returns.

To charge a shot hold down the face button while the opponent is hitting the ball. Each face button performs a different kind of shot.

You can perform a drop shot by holding back on the left analog while using the topspin.

As pointed out in ZackScottGames’ walkthrough, once you beat Drybones you’ll need to go into the temple ruins to complete a series of skill-based mini-games.

The objective is to hit the wall with the ball as indicated on the wall. If the wall tells you to press up on the left analog and a face button it will require you to press the appropriate button until the mini-game is complete. You’ll need to finish 10 challenges to complete the quest.

Once you get into the temple you’ll learn that the magical racket, Lucien, has the ability to control people when people interact with it.

Much like Avengers: Infinity War, Lucien will attempt to regain its power by re-acquiring the five power stones.

Mario will need to stop Lucien from acquiring the five infinity stones as well as defeat enemies along the way while mastering the special shot.

The special zone shot is accomplished by pressing the ‘L’ shoulder button. The zone shot will slow down time and allow you to select a spot on the court to aim your shots.

To perform trick shots you’ll need to use the right analog stick. Trick shots are tricky because you have to make sure you’re at the right distance to successfully pull off the trick shot. 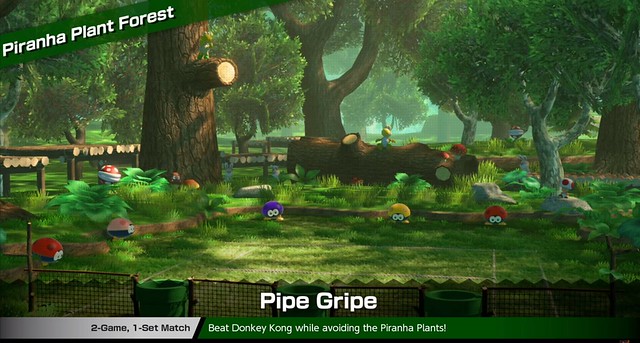 Once you finish Bask Ruins you’ll be able to proceed to the Piranha Plant Forest and fight against Donkey Kong.

Once you defeat Donkey Kong you’ll also unlock a Rally Challenge, where you’ll need to defeat Toad by acquiring 200 points by volleying the ball. You’ll have three chances, but if you miss three times the Rally Challenge will end.

The next map is a rapid fire challenge, where you’ll need to defeat 30 fire-spewing piranha plants.

The trick is that they will spew the fire balls at you constantly while the timer counts down. As you defeat more of them they will shoot more and more fireballs at you. 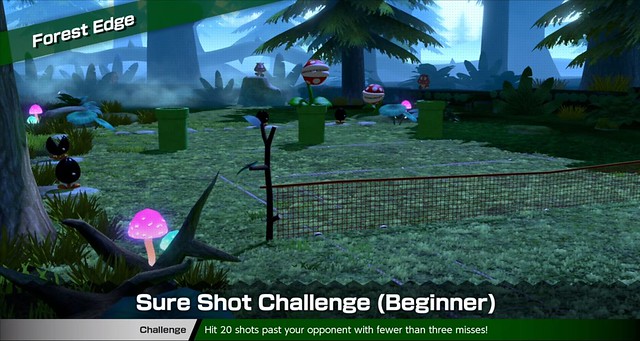 Once you complete the Piranha Plant Habitat you’ll be able to head to the temple or to the Forest Edge.

The Forest Edge is another challenge map. The Sure Shot Challenge will require you to get at least 20 shots past your opponent in under three minutes.

If the ball is returned then it will work as a strike against you. You’ll only have three chances and if Spike returns the ball three times you’ll fail. So be sure to make sure you use the zone shots often to get a fast one past Spike until you nab 20 shots.

Once you complete the challenge you’ll unlock the wooden racket. You can switch the rackets by going into the status menu and you can check on Mario’s stats as well as change his rackets. The wooden racket is far more powerful than the standard racket.

The next fight is a boss fight against Petey Piranha.

The objective is to beat Petey before the time runs out.

Petey will lose its energy meter every time it hits the ball. You’ll need to wait for Petey’s energy to completely run out while you volley the ball. Once Petey’s energy depletes he will get tired and fall over. Step into the zone shot and use the zone shot to hit Petey while he’s on the ground to take his life down. Rinse and repeat this three times until Petey dies.

You’ll earn the first power stone once you defeat Petey.

You’ll need to take the ferry to get to the next area in order to acquire the next power stone. However, the turtle won’t let you on the boat until you beat him in a game of tennis, a 2-Game 3-Set Match.

The trick for the match is that there’s a mast in the center of the deck and it will ricochet the ball off the wooden post. You can actually use the mast for trick shots by angling the ball off the post to force your opponent to move around the map.

Once you beat the koopa turtle, you’ll take the ferry over to the island that will lead you to the haunted house on the hill. 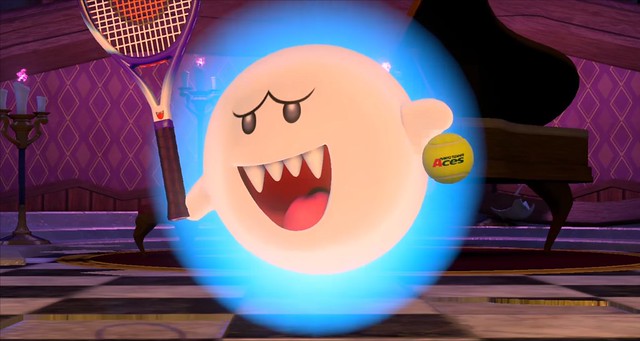 You’ll reach the Mirage Mansion next, and you’ll be able to acquire yet another power stone from the mansion. You’ll have to face off against Boo while dealing with the Malicious Mirrors that will move around the court.

The gimmick for the match is that the Malicious Mirrors will rotate around the court and if you hit the ball inside the mirror it will teleport out of the other mirror in a random direction.

Simply avoid hitting the ball inside the mirror to avoid getting bamboozled.

When you defeat the Mirage Mansion stage, you’ll unlock the practice court to earn some extra experience points while completing the challenge.

You’ll also unlock the Reflection Room, which is the next stage beyond the main entrance.

Now the Reflection Room can be very tricky. The objective is to hit the bubbles and the one that chime are the ones you need to use a zone shot on.

You’ll have to move through three waves by finding the bubble that chimes and then use the zone shot to target it and hit it to make all the bubbles go away.

After you defeat all the basic bubbles another magic clock will appear with a bunch of gears. You’ll need to acquire 300 points during the rally against boo.

Be sure to watch out for the curved shots, which will attempt to catch you off guard. But once you get good and learn the ropes you’ll be able to unlock the mirror racket. 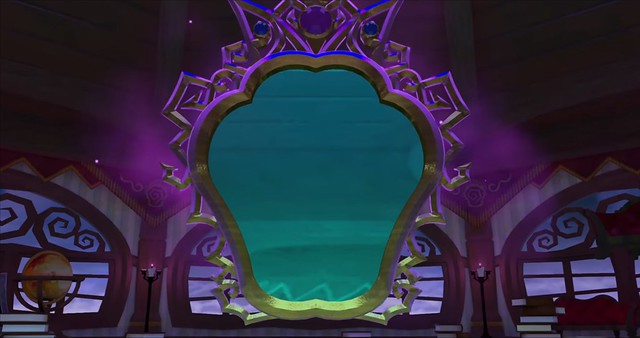 The Madame Mirage will be a tricky fight because you’ll have to first volley until you get your charge meter up. Then when Madame Mirage’s energy meter depletes, you’ll need to use the zone shot to hit Madame Mirage directly in the mirror. Doing so will deplete one of her health hearts.

She’ll then proceed to throw furniture at you like a spurned ex. You’ll need to dodge the furniture to avoid losing time.

The next level will take you to the Snowfall Mountain Station. You’ll need to take out the Shy Guy terrorists who have taken over the train like they were imitating Sweden’s migrant issue.

Alternatively, you can use the zone shots after filling up your charge meter to take out the Shy Guys inside the train car by specifically targeting them.

You’ll need to go through several train cars until you get to the front of the train. The next mission will take you to the Snowfall Mountain station. You’ll need to defeat a Shy Guy in order to get some info and proceed to the next area.

This is mostly a standard match other than the fact that you’ll need to watch out for some turtles, goombas and other shy guys running across the court. Some of them will block your shots or will hit the ball back at you. Compared to some of the other challenges this particular match is pretty straightforward. You can take a detour outside of the standard matches, and you will be able to partake in the challenge to earn some extra EXP and rewards.

The match requires you to get 25 shots in under three minutes without him returning the volley.

The trick is to hit the ball where he isn’t standing.

For instance, when the Shy Guy moves up close to the net use the lob to hit ball at the back of the court.

When the Shy Guy is standing mid-court, use a lob shot directly behind him. When he’s standing to the far left or right hit the ball in the direct opposite position. Rinse and repeat this tactic until you get 25 shot past him.

There’s another challenge at the Snowfall Mountainside node to win an ice racket as a reward if you can score 800 points within the time-limit.

Once you clear it you’ll unlock the ice racket, which will be a massive upgrade over the mirror racket.

The train will then take you to the top of the mountain to fight the Snow Ogre boss. 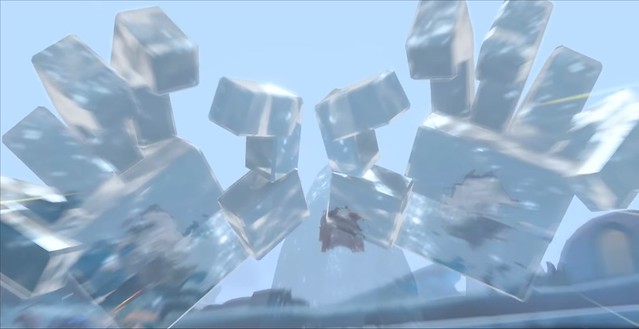 The Snow Ogre boss is tricky. You’ll need to volley the ball against one hand and then dodge the other hand that attempts to smash you.

Volley until the energy meter runs out for the Snow Ogre and then one of the hands will get stunned on the ground. You’ll need to use the zone shot to target the eyeball on the hand; hitting the eye on the hand while it’s stunned will take away its heart.

After you take out an eye on the hand the next time the hand gets stunned the other hand will block its stunned counterpart. You’ll need to use the zone shot to knock the hand out of the way that’s blocking your view.

Defeat the Snow Ogre to acquire the power stone from the chest.