In age of so-called “Progressive” inclusivity, one thing has remained clear over the last six years: if you don’t adopt to the Social Justice Warrior mentality, you’re going to be excluded one way or another. This has become rather evident with some of the news coverage emerging for games like Soul Calibur VI from Bandai Namco, featuring an array of fighters, some of whom are scantily clad.

In an article published on June 18th, 2018, Kotaku’s Cicilia D’Anastasio opens the piece by actively slut-shaming and body-shaming Isabella Valentine for her attire and her bodily proportions, and for not appealing to more conservative dress standards like other games attempting to appeal to phantom audiences, like Dead or Alive 6.

The acrimonious jabs at Ivy’s attire and body shape were pointed and curt, lessening her agency as a character by equating her to little more than a pornographic fantasy. These comments were frequently sprinkled throughout the piece like razor blades on a bloody cake.

It was all part of a lifelong dream to pester the developers about sexy, feminine female fighters in Soul Calibur…

“Ivy feels like a bit of a relic of a past’s mainstream, like lead paint or cocaine for toothaches. Last week, I met with Okubo to ask him a burning question I’ve had since I first laid hands on SoulCalibur 2 in 2003: Why do the series’ women still look like sex dolls?” 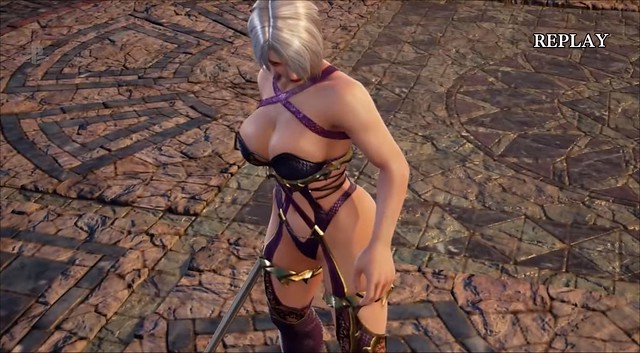 The writing was negatively themed around the depictions of the females in Soul Calibur VI, with D’Anastasio even going so far as to disparagingly ask producer Motohiro Okubo why the females were designed to be sexy in the upcoming fighting game for PS4, Xbox One and PC, asking him…

“I’ve played SoulCalibur games, and I used to play a lot of Cassandra. I was playing Sophitia just now. I noticed that, in this version, her breasts are more prominent. You can see up her skirt. Ivy, still, is wearing not that many clothes. When I play a game like SoulCalibur, I feel like it’s not for me. I feel like it’s for men who might be interested in these characters. I’ve always sort of felt that about SoulCalibur. Is this something you consider?”

Okubo attempted to deflect, saying that the women were designed the way they were due to him and the team being men, he almost apologetically presents the situation as if having sexy female fighters in the Soul Calibur series was a mistake, saying…

“Of course, I am a man, as well as many of the people on the development team. That’s something that we should probably consider if that’s the opinion of a female perspective like you in the future. We weren’t necessarily going out to try and intentionally make something sexy for the purpose of being sexy.”

This is an opposite response from what Yoko Taro, the creative director on NieR: Automata, said when he was posed with a similar question. Taro responded by saying that “I like girls”, and that’s why the women in NieR: Automata looked sexy.

D’Anastasio, however, hated the idea that women could look like Playboy centerfolds, expressly writing with a negative connotation about the idea of women being able to look that way…

“What the designers of SoulCalibur find to be “cool” often ends up looking a little like a fantasy-skinned Playboy centerfold.”

The acerbic language designed to public shame Okubo and the rest of the designers for making sexy women was actually not taken too kindly by Kotaku’s own audience. They actually fired back in the comment section, taking offense to a lot of criticisms put forward in D’Anastasio’s harangue.

In fact, one of the top comments calls out D’Anastasio for body-shaming the women for their proportions.

The author of the piece replied with smarmy intent instead of addressing the criticisms brought up by the readers.

Others joined in to agree with Child and a Fool in One, noting that some women in real life do look like Ivy and Taki from Soul Calibur, and felt as if D’Anastasio was slut-shaming the characters for the way they dressed and body-shaming them for being fit with curvaceous bodies.

A couple of users even responded by posting images of cosplayers who were dead ringers for Ivy. Wow! That is amazing costume work. The flesh colored parts, the props, this is astoundingly good on a very difficult character. pic.twitter.com/BbV8pvEXKW D’Anastasio attempted to change the direction of the conversation to focus on “historical accuracy”, something that outlets like Kotaku have derided Battlefield fans for when criticizing the upcoming Battlefield V, but this time around the comment section was having none of it.

A lot of commenters also pointed out how no one is criticizing the males for being bare-chested or sexually attractive, nor are game journalists criticizing the development team for how handsome and physically fit the male fighters are.

It’s easily a huge double-standard at play, and even more-so given that outlets like Kotaku seem to be perfectly okay with body-shaming females they don’t like, and praising females that they do like.

If the whole point of female empowerment is about embracing women of all shapes and sizes, why are some females castigated for being sexually attractive and others aren’t?

(Thanks for news tip Lyle)