Tribetoy’s upcoming Bow To Blood is a competitive/cooperative airship arena shooter, where players will team up or compete with other players and command airships to win races, fight off robot enemies, and fly their ships around like ace pilots, similar to Han Solo and Lando before the latter became pansexual.

The developers announced that Bow to Blood will drop on August 28th for the PlayStation VR headset. For gamers who were absolutely devastated and worried about any future support for the headset following Sony’s prioritization of putting lesbians front and center during their E3 press conference instead of any sparkling new VR games for their nearly abandoned HMD, at least you can take solace in knowing that the company hasn’t completely forgone their highly expensive peripheral. 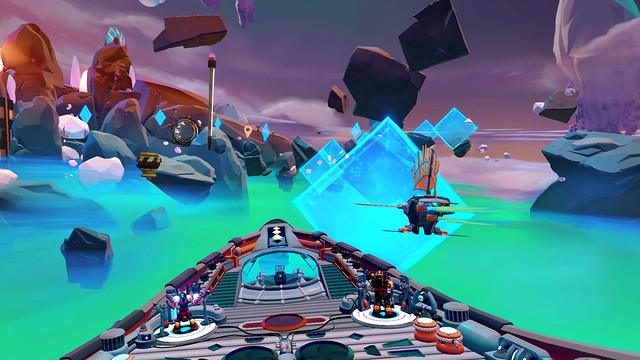 As noted over on the PlayStation Blog, the game is very similar to Allods Online, insofar that you’ll need to control the deckhands to monitor and control the power output and weapons systems. Sean Stahl, the senior designer at Tribetoy, explained…

“From the helm of the airship you will manually control the balance of energy between the ship’s essential systems, modifying it to fit the challenge at hand. Route energy into Smart Drones to disable key enemy ships or shift energy into Boost for an extra burst of speed.”

The game looks pretty neat, and there’s actually a gameplay trailer you can check out below that gives you an idea of how you’ll need to control the ship, fend off your crew from drones, and attempt to blast other ships into oblivion.

The game reminds me a lot of Sea of Thieves crossed with Guns of Icarus. The airship mechanics also seem to operate very similar to the naval segments in Assassin’s Creed games.

The requirements to maintain ship power and divert energy to different systems seems like it comes right out of Astrum Nival’s Allods Online’s astral ship segments.

The game is at least a nice departure from the typical drudge that PSVR gamers have been receiving lately. It still seems more like a tech demo than a fully fleshed out gameplay experience, but maybe if it does well enough we’ll see a sequel that takes those concepts and expands them beyond a competitive arena shooter… maybe?

Anyway, you can learn more or look for Bow to Blood to release over on the PlayStation Store starting August 28th.