Trigger and Arc System Works upcoming Kill La Kill The Game is set to make a playable debut at this year’s EVO in Las Vegas, Nevada. The big championship series will get underway over the August 3rd weekend, and Arc System Works will put two of the game’s playable characters on display to highlight their detailed animation system at play, which is based on Trigger’s designs.

According to Gamer.ne.jp, the two playable characters at the event will be the ones showcased in the latest trailer, which is Satsuki Kiryuuin and Ryuko Matoi.

The two sexy femme fatales – decked out in nothing but dental floss and thigh-high boots – will put their moves (and their boobs) on display in front of the EVO crowd. You can check out the gameplay teaser for yourself below, which aired just before the Trigger x Arc System Works panel at this year’s Anime Expo 2018.

Given how much of a fuss has been made over Dead or Alive and Street Fighter, I don’t know how well a game like Kill La Kill will be accepted in front of such a puritanical, pro-feminist audience.

As for the game itself, it utilizes the per-pixel shader technique Arc System has employed for Guilty Gear Xrd and Dragon Ball FighterZ. APLUS, however, is at the developmental helm and they’ve retained the current method of using 3D models and assets, but have relied on the cel-shaded shader design to give the impression of the characters being hand-drawn. Heavy black outlines using an ink-filter for the edge detection give the impression that the characters are hand-drawn. 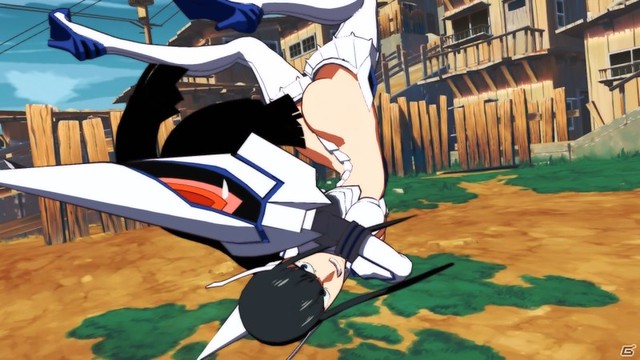 Much like Dragon Ball FighterZ, the animations for certain attacks have the filler frames removed between the key frames so that during certain cinematic attacks it looks as if the characters are animated by hand.

The actual gameplay is actually similar to Bandai Namco’s Naruto Shippuden: Ultimate Ninja Storm titles. So if you’re into the 3D arena-based fighting games you might like Kill La Kill: The Game.

You can look for the title to launch in 2019 for Steam and PS4. You can also learn more about the upcoming title by visiting the official website.