Nintendo’s latest JRPG from Square Enix and Acquire called Octopath Traveler is currently available for the Nintendo Switch. The game is a unique title insofar that there’s a non-linear approach to the character development and how the stories unfold. If you’re in need of a quick walkthrough guide for Octopath Traveler, you’ve come to the right place.

YouTuber XCageGame offers a video playlist for Octopath Traveler, walking you through the early goings of the game. You can check it out below.

At the start o fthe game, you can choose which of the eight characters you can start with to begin the journey. Each character has their own traits and starting story, as well as talents to help them along the way.

Tressa, for instance, is a merchant with the ability to purchase and trade items.

Olberic is the one from the demo. He’s a knight with the ability to challenge foes and bolster defenses.

Primrose is the second character from the demo, a dancer with the ability to summon those to add her during battle or use her alluring skills to get what she wants from townsfolk.

Ophilia is a cleric from the Frostlands, being able to summon and guide, using magic and healing to aid others.

Cyrus is a scholar, and one of the more unique characters of the bunch. He teaches at the academy and has the ability to study foes to find their weakness and scrutinize the environment to uncover hidden secrets.

H’aanit is a hunter who lives out in the wild, she has the ability to capture and provoke.

Therion is a thief from a small village who wants to increase his skill. He has the ability to pick lock objects and steal from other NPCs.

Alfyn is the last of the group, an apothecary who uses crafted concoctions and chemistry to heal wounds and remove status effects. Alfyn can concoct potions as well as inquire from others to gain leverage in a situation.

In the walkthrough that XCage put together, he starts with Ophilia.

There’s a cinematic that starts with Lianna and Ophelia talking about going on a pilgrimage.

After the cinematic you’ll learn about navigation. 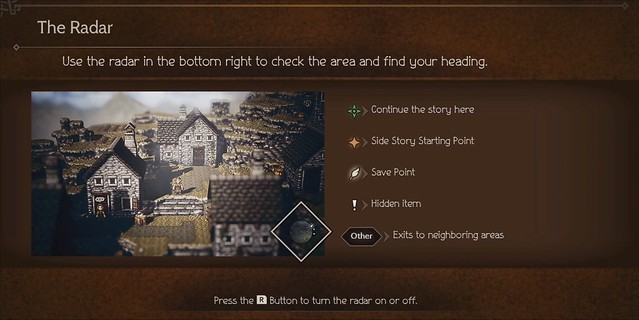 You can use the mini-map radar to help you navigate around the towns and world map, while also looking over the legends icons to help you find save points, story quests, side-quests, and hidden items.

You can turn on or turn off the radar mini-map by tapping the ‘R’ button on the Joy-Con controller.

Exit the room and enter into the main part of the chapel.

Another cinematic will play, where Archbishop Josef will explain that Lianna will need to make the pilgrimage to carry out the rite of the Kindling.

Once the cinematic ends a little boy will come in and say that he can’t find his mom.

The game will teach you how to use the character’s path ability. Path abilities are executed using the ‘Y’ button on the Joy-Con controller.

Each character’s path ability can be used outside of combat.

In Ophelia’s case, you can use the path ability to guide NPCs to a location by going up close to them and pressing ‘Y’.

Different characters have different abilities, so you can experiment with them during your journey.

Take the child and guide him outside the church to his mother who is just in front of the church doors.

Back inside the cathedral there’s another short talking scene where the Archbishop falls ill.

Once the sequence ends make your way outside and down the street toward the overlook. 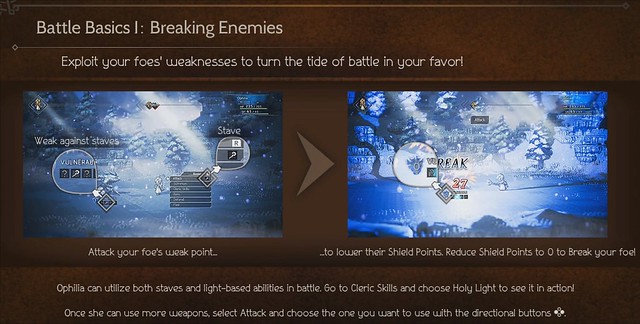 After the talking sequence ends you’ll need to head to the Cave of Origins where you’ll get into your first battle sequence with Ophilia and learn how to fight.

All of the combat is pretty basic across the board for each character. The game uses turn-based mechanics, and as you battle you’ll be able to determine the vulnerabilities of your foes by using different attacks on them. The more attacks you use that an enemy is vulnerable to the more likely their defenses will break and you’ll be able to do even greater damage to them.

Each character in combat has their own weapons and abilities. For Ophilia, she’s a cleric class so her abilities center around healing herself and others. 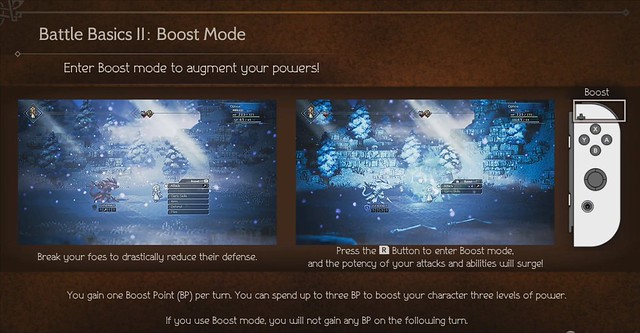 How To Enter Boost Mode

When you build up enough boost points per turn, you can use the boost points to increase your character’s attack power output using the right bumper on the Joy-Con. You can increase the potency of your attacks with the boost mode.

Successfully leveling up and winning battles will earn you skill points that you can spend on brand new skills to learn new abilities.

When playing as Ophelia you’ll have the ability to bring some of the knights with you into battle. If you talk to an NPC with the Guide ability and have them follow you, you can summon them into battle using the “Summon” option from the menu.

For the boss fight it will last a while… around eight minutes. Keep attacking the boss and summoning a knight to aid you battle.

Grab the lantern and return to the Archbishop.

After another talking segment, the Archbishop will set Ophelia on the quest to complete the Rekindling, as Lianna will stay behind to keep watch over her ailing father.

Once you pick up the quest to complete the Kindling, you’ll be able to venture throughout the rest of Orsterra and meet the seven other characters.

No matter which character you choose to play, you’ll be able to meet up with the other seven characters once you complete the tutorial mission.

When you exit the town you can use the world map to see where the other characters are located on the map.

As Ophelia you’ll need to head north through the Atlasdam Flats.

You might want to level up along the way to battle as much and as often as possible to level up.

In Atlasdam, within the city, you’ll find Cyrus the scholar on the streets just north of entering from the east.

When you meet up with new characters, you have the ability to play through their backstory to understand what happened in their story and learn how to utilize their skills.

After Cyrus goes through his intro dialogue and talks with the princess, make your way to the library.

Talk to the headmaster and then make your way back into the library to talk to Mercedes.

When the dialogue sequence finishes, proceed to the Royal Academy of Atlasdam and inquire of the headmaster to learn more about the tomes.

Use Cyrus’ talent with the ‘Y’ button on the Nintendo Switch Joy-Con to scrutinize the other NPCs for details on their knowledge of the tomes.

Cyrus will need to deduce who took the key. He will point to Russell as the culprit.

Cyrus will meet with the other main character before proceeding into the cave to solve the mystery. You can have up to four characters in a party at a time. You can swap the characters in and out at the inn.

Once Cyrus joins your party you’ll need to proceed into the Subterranean Study.

Cryus has black and red mage abilities, including using magic elemental attacks to use on enemies through his scholar skills.

You’ll find Albright in his study where you’ll need to battle him. He’ll summon a few water wisp minions to help him. Be sure to take those out first before you begin to attack him. The wisps are weak against fire attacks.

Headmaster Yvon will send Professor Cyrus on a sabbatical to avoid a scandal involving an affair.

Cyrus will use his time to go in search of the tome that went missing 15 years prior.

Once Cyrus joins your team for good, you can exit the village and go off in search of your next companion.

If you continue to follow Cyrus’ story you’ll need to venture to Quarrycrest to learn more about the missing tome.
After you exit the city follow the icon on the mini-map toward the next character location. You’ll likely want to train up as you travel along the North Rippletide Coast as you proceed south toward the edge of the map. 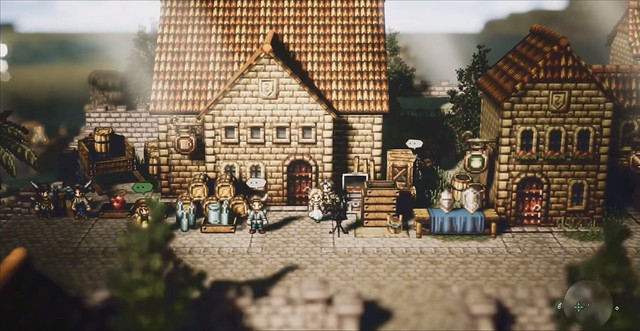 How To Trade With Tressa The Merchant

You’ll eventually enter into the town of Rippletide.

There you’ll meet Tressa, a merchant. She works to keep her family shop afloat. Tress will have a green speech bubble over her head and will be hard to miss.

In Tressa’s story, she’s robbed by a group of dastardly pirates. You’ll be able to play through Tressa’s backstory to discover how she ended up getting crossed by the pirates.

After a short introduction to Tressa and her parents, you’ll need to exit the shop and head across the bridge to the fisherman’s stand.

Tressa will need to collect items from the NPCs, including a bottle of wine. Much like the other characters, you’ll need to make deals with NPCs by trading with them by pressing ‘Y’ to interact with them.

After getting the fish and wine, a captain for a merchant ship docks and talks with Tressa. Another talking sequence will ensue, and the pirates will steal from and bully Tressa.

Once the sequence ends, you can do a little bit of haggling at the pier before talking to the Captain and enduring another lengthy talking sequence.

Tressa will attempt to get back her stolen wares by hounding the pirates and putting them to sleep to retrieve the goods. At this point she’ll join the party and you’ll need to head west toward the cave.

Battle through the enemy NPCs and head to the Caves of Maiya.

The pirates will drink the wine and will doze off, enabling the hero party to go in and beat the crap out of them.

Proceed through the cave until you reach Mikk and Makk.

After a verbal showdown with the pirates, Tressa will battle the pirates in a boss fight.

During the fight you’ll learn that they’re weak to lances, fire, lightning, and staff attacks. You can use Cyrus to analyze them if you need to better understand their vulnerabilities.

Don’t forget to use the boost with a combination of an attack that they’re vulnerable to in order to break their guard and do additional damage.

The battle will go on for about 10 minutes. It might be best to focus on targeting one of the pirates at a time since you’ll be fighting two of them.

Once the boss fight ends, Captain Leon will come to Tressa’s aid. After defeating the pirates and collecting a book from Leon, Tress will head home to read the book of records. This will compel Tressa to leave Rippletide and become a traveling merchant.

Like everyone else’s path in Octopath Traveler, Primrose starts off with a backstory about the events leading up to her journey that takes her across the realm. She has the ability to charm NPCs and lure them into battle to help aid her, not unlike Ophelia. Of course, the difference is that Primrose uses her feminine wiles to get what she wants.