With the broadcast of EVO 2018’s Street Fighter V Top 8 finals, we saw a couple of matches involving Rainbow Mika. Specifically Olivier “Luffy” Hay, a Chinese e-sports competitor from France, picked R. Mika in her default outfit, allowing everyone see her natural curves on display and bountiful cleavage bursting out of her skintight spandex wrestling outfit. Unlike the Top 8 tournaments for Street Fighter V from 2016 and 2017, there was no censorship of R. Mika or Cammy, and a lot of that was thanks to ESPN and Disney XD not being involved with the broadcast.

Some of you might remember that in 2016 R. Mika wasn’t allowed to don her default costume during the broadcast of the Top 8 finals of Street Fighter V. When reached for comment ESPN told us that they had no comment at the time regarding the censorship of R. Mika’s default costume. 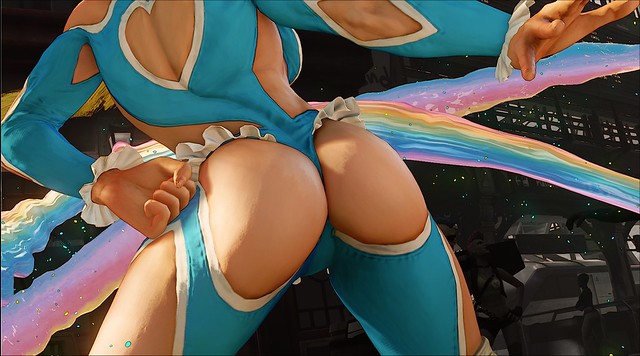 The following year, during EVO 2017, when Street Fighter V was broadcast once again on ESPN, competitor Kazunoko was told to change from using Cammy’s default thong leotard, which she has been wearing for more than 20 years.

When reached for comment regarding the censorship, ESPN’s press representative told us that it was due to broadcasting standards that Cammy couldn’t be displayed in her thong leotard.

This year, however, things were a little bit different. We saw R. Mika appear a couple of times throughout the Top 8 finals wearing her default costume, something that even caught the attention of commentator James Chen. You can see Luffy using a pink-clad R. Mika during his fight against Tokido.

It was also pretty shocking to see that they didn’t censor R. Mika’s special anymore than it was already censored. While the butt slap was still out of view, you could still catch glimpses of her bare cheeks in the thong-style wrestling getup.

This was a surprisingly refreshing turn of events, given that in recent years we’ve been seeing more and more censorship applied to the FGC and in EVO in general, but this year things were a little more lax. A lot of this was likely due to the fact that Top 8 finals was not broadcast on cable television this year. If you check the August 5th, 2018 schedule for ESPN 2 you’ll note that tennis and baseball were on instead. Meanwhile Disney XD was airing Star Wars Rebels, according to the television schedule. Some gamers hypothesized that the reason Disney and ESPN were so heavily promoting the FGC and EVO between 2016 and 2017 was due to the launch of Marvel vs Capcom: Infinite, and that by attempting to dabble in the e-sports scene they could leverage it to promote the game for sales and also create some bleed-over effect for the comic books, movies and TV shows. However, Marvel vs Capcom: Infinite was a sales failure and an e-sports failure, and some assume that Disney decided to cut ties and pretend it never happened. Alternatively, it could have simply been that there wasn’t enough advertising revenue involved to keep broadcasting EVO to the casual audience and they figured they would cut their losses and focus on other endeavors.

Either way, this is definitely a win for the anti-SJW side who have grown tired of games (and fictional females in particular) being censored to meet the ever-expanding standards set by the politically correct brigade.