Telltale Games finally rolled out the first episode for the final season of The Walking Dead. The episode is currently available for Nintendo Switch, PS4, Xbox One, and PC. Gamers inevitably are going to want to know the different routes they can take, the different choices they can make, and the outcomes for making said choices. Thankfully there’s a gameplay walkthrough guide available to help you get through the first episode and what some of the choices are like and how they affect the game.

YouTuber RabidRetrospectGames has a near five hour walkthrough for The Walking Dead: The Final Season Episode 1. You can check it out below.

The game starts with a recap for your choices, which you can either import through your saved game from the past games or you can use the Telltale Story Builder to build your choices for The Walking Dead: The Final Season.

Some of these choices will affect the outcomes and character motivations in The Walking Dead: The Final Season, so keep that in mind when attempting to use playthroughs to help you along the way.

Early on you’ll be able to talk to AJ about his nickname and how he’s hungry. Eventually the duo will pull into an abandoned house to find food.

You can choose to ring bell in front of the house, but there are no people around, just a walker.

Unlike previous entries in the series you’ll control Clementine via a third-person over-the-shoulder camera similar to Resident Evil 4.

Attacks are done using two buttons on the Xbox One or PS4 controller. ‘B’ on the Xbox controller will stun the zombies, where-as ‘Y’ will kill them. Triangle on the Dualshock is to kill, whereas Circle is to stun.

You can examine the outside of the house and then use the crowbar to get inside.

Once you get into the room you can check the mattress for the trap door, but it’s rigged.

The duo will head back outside. You’ll need to kill the two zombies and then make your way into the car.

Proceed to fight through the quick-time event until the car crashes.

After the intro, look ovr and rip off the tape on Clementine’s wrist and then you can proceed to examine the room.

When you exit the hall and examine the rooms eventually a kid who looks like AJ will come looking for Clementine. You can show yourself or tell him to drop his weapon, but then Marlon will tell Clementine to drop the knife and then give her a short introduction to Ericson’s Boarding School For Troubled Youth.

Marlon is also the leader of the group and a proper straight, white male.

Head into the building and go into the hall on the right to follow the music where Louis is with AJ.

Louis will also start playing a song for Clementine, and you can tell him it’s a great song or to stop. You can also tell AJ to give the piano a try or not to. 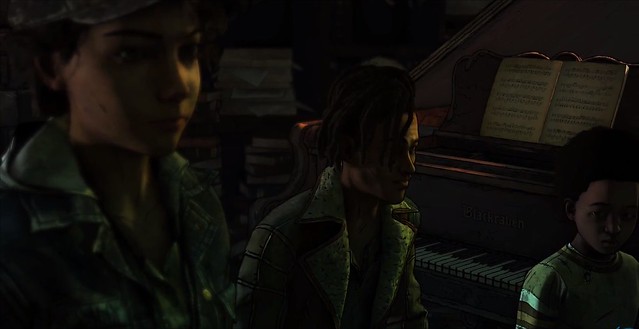 After meeting up with Violet, Clementine will go out into the forest to clear out the walkers.

Wait for the walkers to get within range and then cut the rope.

It takes a little longer to kill walkers using an instant kill move compared to stunning them, so if there’s more than two zombies on the screen go for a stun and then kill the one that gets close.

AJ will have to go around and apologize to some of the kids, starting with Ruby. If you choose to tell Rubby that AJ was just scared.

You can then go around and talk to the other kids, including interacting with Violet and Tenn at the makeshift graveyard and the two boys carving weapons on the couch. 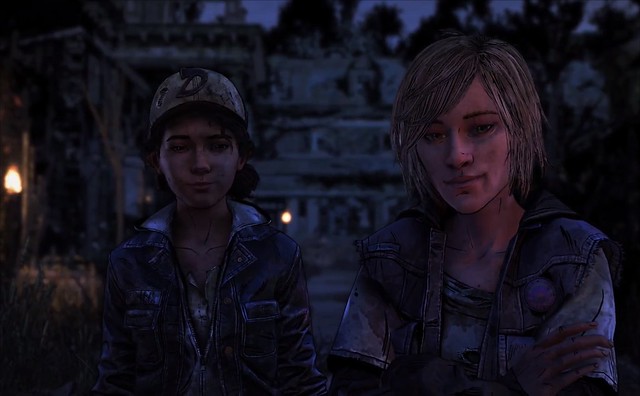 You can also talk to Aasim. AJ will attempt to read his diary, and you can choose to have AJ keep reading it or to hand it back. If you hand it back then Aasim will appreciate AJ and Clementine respecting his privacy.

Keep in mind that the decisions you make for AJ will affect how he develops.

During the card game you can choose to ask various questions, from the group or answer based on decisions you’ve made in previous games. If you killed Lee in the first season you can choose to tell them about it, or if you let Lee turn into a walker, you can also tell them that as well. 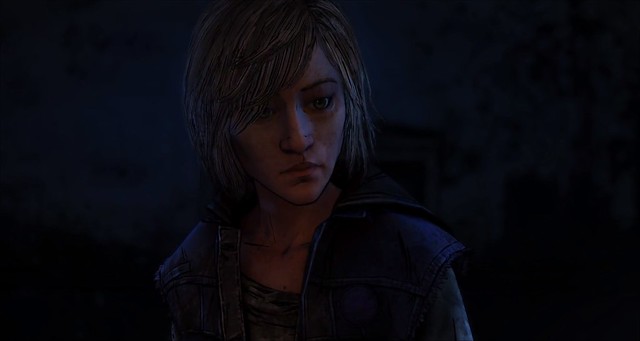 Violet will come into the room to get Sophie’s coloring box. You can choose to tell AJ to give the box back or to keep coloring. If you give back the the coloring box then Violet will remember that.

Clementine and AJ will go into Marlon’s office, and you can tell AJ to either give back the toy or tell him he can keep it.

Marlon’s dog, Rosie, will enter. Marlon will ask if you trust him. If you choose to trust him he will teach Clementine how to keep Rosie calm. 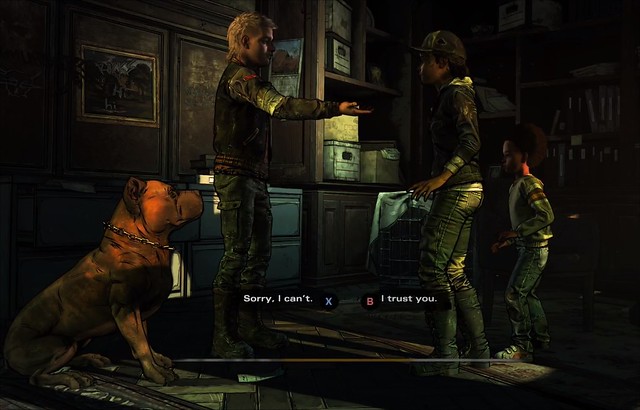 Marlon will show you a map, and you’ll be able to choose to either go fishing with Violet or hunting with Louis.

When you go out to the forest you can partially move around on your own.

You can help Aasim to shoot some rabbits using a first-person mode.

After you kill some of the bunnies you’ll then go to the fishing spot.

The fishing spot will be robbed and so the only place to go is to the train station. Alternatively, if you go fishing with Violet and Brody you’ll partake in a fishing mini-game and Abel will have robbed the traps where Aasim and Louis were hunting. 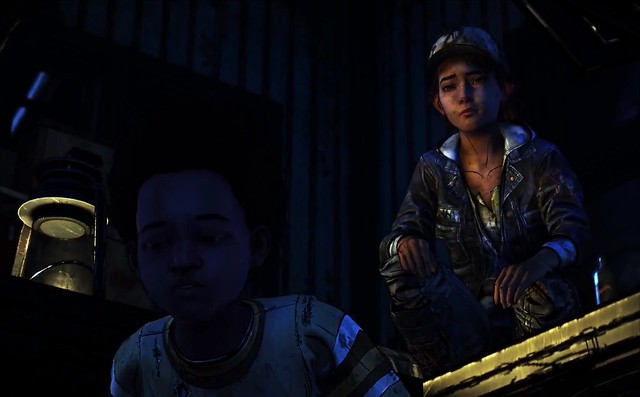 Abel will hold up Clementine and AJ, and you’ll have a choice in how to address him. You can tell AJ to shoot, but Abel will kill both Clementine and AJ. You can also attempt to fight Abel and push him into the walkers, who will attack Brody.

Alternatively, you can tell AJ to lower his gun and then they’ll take the food and flee.

Brody won’t like what Clem did, and it will change her relationship with Clementine. You can also choose to have Tenn draw Clementine and AJ in the picture.

Grab the brick on the ground and then go to the cellar door and smash the padlock. 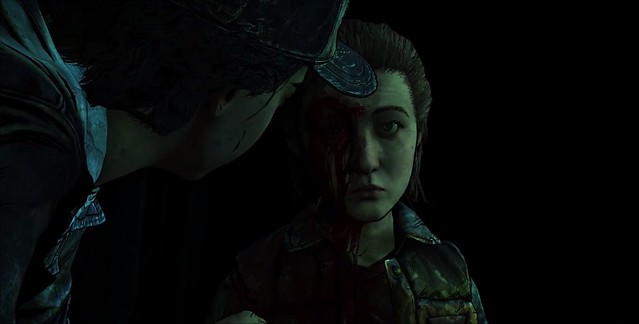 Brody will explain that Marlon gave the raiders Tenn’s sisters in order to leave them alone and that he had plans on giving the raiders Clementine in exchange for leaving them alone.

Marlon will pull the gun on Clementine, but you can appeal to the others, including Louis and Violet.

You can also explain to the group that Marlon had plans on trading Clementine and AJ to the marauders in exchange for safety, which will allow them to rally around Clementine.

You can talk Marlon down and tell him he can stay but he’ll no longer be the leader, but AJ will shoot him in the head, killing him and ending the episode.

Alternatively you can go and grab the gun from Marlon and you can then tell him that he’s going to be locked in the basement, but AJ will still shoot him dead in the head.

You can see how some of these alternate segments play out in the second half of the walkthrough below.

The Walking Dead: The Final Season – Episode 1 is available right now for home consoles and PC.