Brie Larson in the debut trailer for the upcoming 2019 release of Captain Marvel was a charisma-free starfish on the screen. She showed about as much emotion in the trailer as a constipated tree log while portraying the lead character Carol Danvers, A.K.A., Captain Marvel.

YouTuber Turd Flinging Monkey decided to give Brie Larson a makeover by using FaceApp to make her smile in select stills from the trailer. The results made the actress come across as having verve and the visual depiction of actually wanting to be in the film. However, having Brie smile in the stills made Social Justice Warriors angry, even to the point where they wrote entire diatribes on Left-leaning blogs to talk about how “sexist” it was for Turd Flinging Monkey to make Brie Larson look remotely appealing as Captain Marvel.

After Turd Flinging Monkey posted the tweet with the images, it all began to snowball from there.

It started with tweets from the typical SJW section of Twitter, including third-wave feminists, male-feminist allies, identitarians, and gender pronoun prefects.

Sorry do you think she got all these awards from only having one facial expression? pic.twitter.com/MARukKAVS1

For the 100000° time
She
Lost
Her
Fucking
Memories
That incluides emotions, and the movie itself will be about she getting them back

I am so freakin’ glad this movie is treating her like a person instead of catering to your infantile women-gotta-be-nonthreatening-or-it-gives-my-feelings-and-boner-a-boo-boo preferences.

This is terrible. There was nothing to fix

What a sad life you must lead

Women get told to smile all the time, by people who aren’t owed a smile, but just want to see a smile. It’s like saying “It’s more important for you to please me than it is for you to have space to feel your own emotions.”

After lots of angry people expressed their indignation at the idea of Brie Larson looking more appealing as Captain Marvel by showing some sign of emotion beyond lethargy, bloggers began revving up their engines like participants in the Culture War Death Race.

“[…] at its core, most MCU fans saw the criticism, and the tweet that embodied it, to be misogynistic. […]”

“[…] Some men expect women to smile and look “pretty” to fit their own personal image of what women “should” look like, in an offensively controlling and dehumanizing manner. Should women like Larson not meet the standards of these men, they are judged and criticized.”

Outlets like IndieWire also called the makeover “sexist”, but stopped short going Screen Rant’s route of likening a woman actually showing some measure of ebullience about her work as a form of degradation. IndieWire wrote…

“This sexist reaction obviously found its way to Larson, who responded to it by posting to social media photoshopped posters for “Iron Man 3,” “Doctor Strange,” and “Captain America” featuring the male superheroes smiling.”

The Photoshopped images that IndieWire is referring to were originally posted on Larson’s Instagram page, but they were reshared by other members of the Social Justice community on Twitter.

I agree, Captain Marvel needs to smile more, so she fits in with the rest of the universe pic.twitter.com/CAJ7MzUOxK

Obviously, none of the Social Justice whining quite measured up to Vox’s hot take on the matter, where the outlet wrote…

“[…] the trailer also brought out the usual sexist trolls. A stew of mostly male social media users prejudged Larson’s performance, calling it “wooden” and claiming she ought to “smile more”—a very common form of harassment that objectifies women by implying their emotions and appearance ought to be controlled and that they’re for the pleasure of others.”

ComicBook.com, an avid anti-#ComicsGate outlet and a regular anti-#GamerGate supporter, also joined in on the Leftist barrage of attacking fans who dared criticize the Captain Marvel trailer, denoting anyone who dared point out Larson’s imitation of a goldfish as “misogynists” and “sexists”, with Patrick Cavanaugh writing…

“The debut of the first Captain Marvel teaser resulted in sexist internet trolls complaining that Brie Larson’s Carol Danvers doesn’t smile enough in the promotional material, with some misogynist users going so far as to Photoshop images of the actress adorned with a smile.”

An actress being “adorned” with a smile it’s now sexist, according to Cavanaugh.

I suppose the next time you see a woman smiling while she’s out and about around town, tell her that ComicBook.com felt that smiling is sexist and that she needs to glower more. William Hughes from A/V Club isn’t too far removed from the same sort of disposition on female smiles as Cavanaugh, as he takes men to task for wanting women to spread their cheeks…

“Out of all the many ways that men have found to be condescendingly shitty to women over the millennia, few are as awful or innovative in their simplicity as telling a woman to smile. […]”

“[…] So honestly, some of the reactions to the recent Captain Marvel trailer—and specifically from people upset that Brie Larson isn’t grinning ear to ear while she’s crashing into video stores and kicking the shit out of evil old ladies—can honestly go fuck themselves. […]” 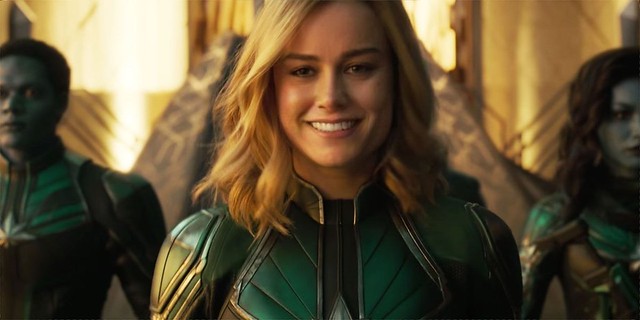 None of that compares to Yahoo’s take on the matter, which manages to stir up the old #GamerGate stew from four years ago, bringing out all the falsehoods that have been debunked by peer reviewed reports and an FBI investigation, with feminist Gwynne Watkins directing her ire at Turd Flinging Monkey in one of the more heated pieces online, writing…

“The user who created these images is an outspoken opponent of women’s equality who frequently posts in support of the Gamergate movement (which targets women who participate in or critique the video game industry) and repealing the 19th amendment, which allows women to vote in U.S. elections. The images of a dead-eyed, smiling Larson are no doubt a deliberate effort to get a rise out of women who are tired of men telling them to smile (more on that here) and men who don’t want women to have basic autonomy over things like their own facial expressions.”

Bustle’s Sophy Ziss was far less fussy and far more prissy about the turn of events, writing like a spurned lover chronicling her frustrations onto a digital notepad following a night of crying into a tear-soaked pillow…

“No one ever seems to have a problem with the way male superheroes look, act, or speak in their film trailers, but — surprise — Captain Marvel doesn’t get the same treatment. An internet troll told Captain Marvel to smile more after the film’s first trailer premiered, and fortunately, the rest of the internet was not having it, and neither was star Brie Larson. […]”

“[…] Even when women are taking on roles like the universe’s most powerful superhero — one that’s half-human, half-Kree, and distressed by the loss of all of her memories — she’s still expected to smile. Looking tough and unyielding is apparently reserved for boys, not the Marvel Cinematic Universe’s first leading female superhero.”

Sandra Song from Nylon couldn’t resist using the lingo most associated with the Social Justice crowd, calling Turd Flinging Monkey’s tweet “gross” and launching into tirade about smiles being associated with “femininity”, giving you a pretty good idea of what the ratio of her smile-to-femininity is, with Song writing…

“On the heels of Good Morning America’s debut of the first trailer yesterday, it didn’t take long for the internet to begin editing Larson’s face to fit more conventional ideals of femininity. Which is especially insulting given that Larson—who stars in the film as Carol Danvers aka Captain Marvel—is the face of the first Marvel Studios film with a female lead. Following the story of Captain Marvel grappling with her human-alien heritage, it’s a film that’s been four years in the making. So to have this highly anticipated, historic moment tarnished by such an overtly sexist, unnecessary gesture is infuriating.”

All right, I’m going to end it there.

I could write all day about salty SJWs, but there are more tears to collect elsewhere.

Have at it, mates.