Dontnod Entertainment and Square Enix’s Life is Strange 2 came out at the end of September for Xbox One, PS4, and PC. The adventure-drama is the next big outing for the company, centering around two boys making a journey while on the run from the law. For gamers interested in the choices and options that are at your disposal in the game, there are some walkthrough guides available for the first episode of Life is Strange 2.

YouTuber MKIceandFire has up the full episode walkthrough, which you can view below.

The game starts with a cinematic of a police officer checking out a house but his car gets blasted over by someone with super powers.

The very first choice you get in the game after the kids get home from school is to smoke or not.

If you smoke in real life, you get cancer.

You also get to choose what you think of the drawing on Sean’s hand.

The last choice you have during the discussion involves whether you support Lyla and Sean’s friendship. 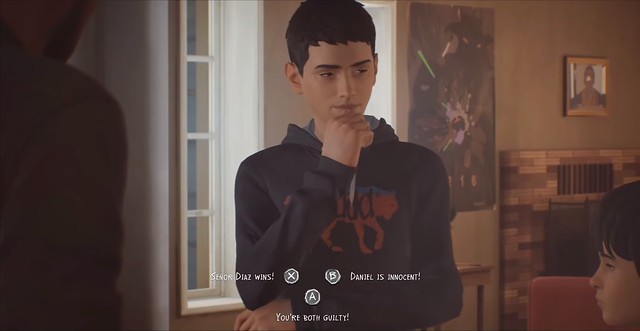 Inside you can choose who gets the final Chock-o-Crisp, Sean’s dead or his little brother, Daniel. Alternatively you can choose the middle option and keep it for yourself.

You can look around the house at the stuff, check out the text messages sent to Sean, or explore the rooms.

The main goal will be to gather the items on Lyla’s makeshift list. You’ll need to find blankets, which are in the basement on the shelf to the left of the skis.

If you go into the garage Sean’s dad will ask for a 16mm wrench. You’ll need to first bring the wrench on the yellow tray, and then later there’s a wrench on the left side of the hood.

Sean’s dad will ask him about building a trade, as well as working on the car for his graduation. You can either tell him the car is wicked or that he doesn’t have to build it. If you go back upstairs and into the cabinet you’ll find the munchies for the party.

Head into Sean’s room and open up the safe to take the weed pipe.

You can open up his drawer next to the bed and take some condoms… just in case.

You can also open up the sketchbook and observe the room. Proceed to use the left analog to sketch the room.

You can also talk to Daniel, who is working on some “secret stuff”. He will be mean to you if you chose to give the Chock-o-Crisp to their dad or if you had Sean keep the candy for himself.

You can also joke with Daniel about Lyla wanting to marry him.

Once you get done with all the stuff pack the gear in the backpack and then go to the laptop to Skype with Lyla. When Daniel barges in and Lyla criticizes Sean for his behavior, you can either apologize or explain that Lyla doesn’t know what Daniel is like.

Eventually Daniel will get into an issue with Brett. 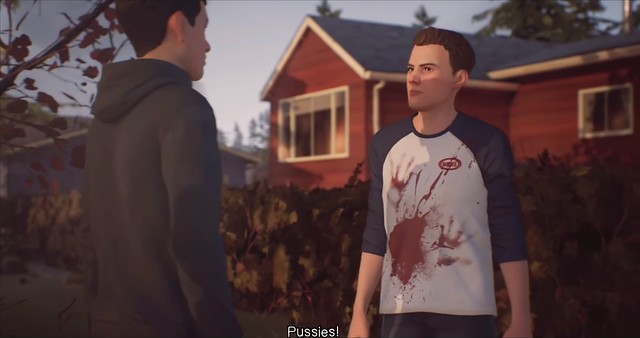 If you confront Brett then Sean will get into a fight and Brett will fall over and die in a really gay way. Magically a white police officer with an itchy trigger finger will come running up out of nowhere and then shoot Sean and Daniel’s dad for no reason, with Dontnod obviously taking a play out of the propaganda playbook of Black Lives Matter.

The developers also made Brett and his family racist because the studio is obviously “woke” and attributes patriotism with racism.

After the cinematic, two days later Sean and Daniel are walking along the street. 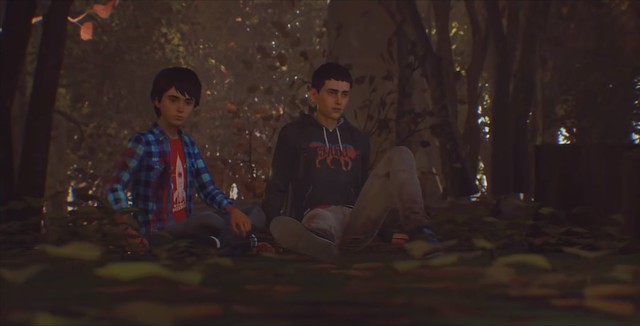 One of the first choices you get after the intro finishes will be to either promise Daniel that you’ll get a candy bar for him later, or you can attempt to break into the car and steal the candy bar.

You can also make Daniel use the gross restroom or let him use the bathroom in the forest.

Move further into the forest trail and follow the signs leading toward the river.

You can also choose to play hide-and-seek or not with Daniel while traveling through the forest.

Along the way you’ll need to keep talking to Daniel, comforting Daniel, and helping him until you reach a giant overhanging rock.

Sean has the choice of either directing Daniel to help gather supplies for building a fire or protecting the base.

When you’re ready to eat you can either sit and draw by the river or attempt to catch a fish. You can also teach Daniel how to skip stones.

You can also spend a lot of time talking to and explaining things to Daniel as he explores the forest.

Eventually, during the campfire, Daniel will ask about what happened… and you’ll be able to tell him that it’s not his fault, or explain that there was a fight with Brett. 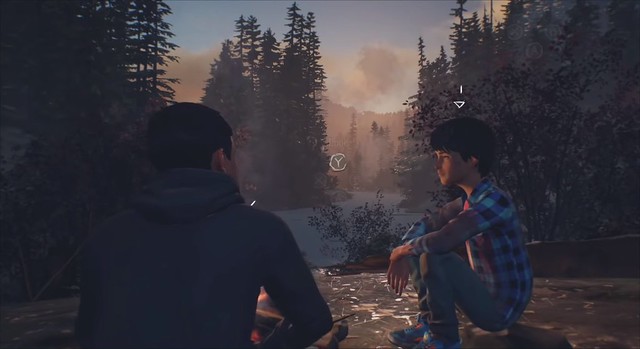 After the very long and boring camping sequence, you’ll head to a gas station off the highway.

There’s a family eating, and you can either send Daniel to beg for money, or ask them for some food. If you ask for food, though, they will decline you any food or money.

Go into the gas station bathroom to freshen up and refill the water.

The game is filled with a lot of Liberal propaganda, including painting Conservatives as racist and even promoting Colin Kapernick with a poster inside the gas station. 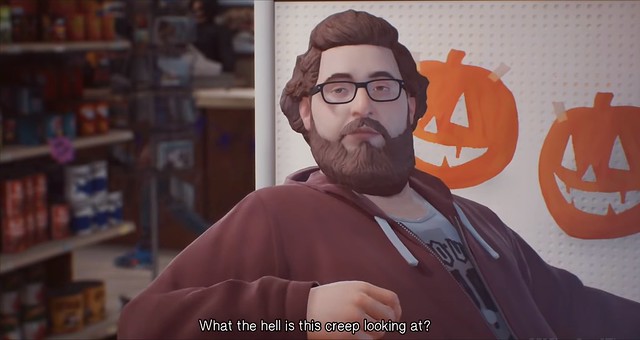 You can talk to the Liberal journalist, Brody, who is looking at pictures of hot naked chicks living life as a nudist.

It’s also possible to steal some of the items from the store or attempt to pay for it.

There’s a Power Bear claw machine where you can attempt to grab a prize, but you only have $10 so use your money wisely.

If you buy some food you can eat it at the picnic table just outside the gas station. 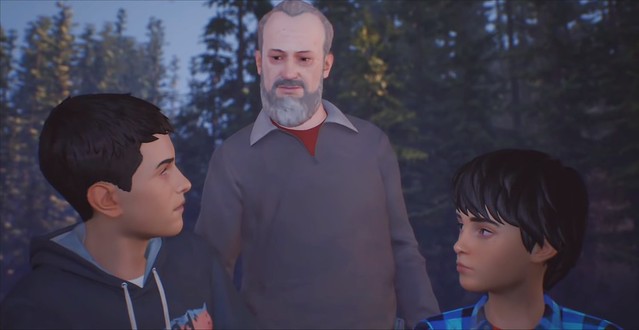 While surveying the free map, an old white man will come and beat up Sean and Daniel asking if they stole anything from the store.

The thing is, even if you didn’t steal anything the white man will still beat up the boys.

You’ll have the option to discuss it, flee, or attack the old man.

Since Dontnod is an SJW company, they portray the white males as racist Trump supporters.

After the Trump supporter, Hank, leaves the room, knock over the object in the room to turn on the computer to light up the room. Knock the poster over and then kick the bear off the shelf and talk to Daniel.

Tell Daniel to open the window or open the back door. Tell him to look for a tool and he’ll hand Sean a tool.

Scooch over and get the keys and give them to Daniel.

Daniel will use his Akira powers to knock over Hank, the Trump supporter. You can either run away or steal the camping gear.

If you attempt to steal the camping gear then Hank will call Sean a “spic” and you can either run away or beat him up.

After escaping the two boys will go to the soy-guzzling Left-wing journalist’s station wagon to make an escape.