The new DLC for Insomniac Games’ Marvel’s Spider-Man has become available featuring an SJW’d Black Cat. The DLC starts with Mary Jane Watson talking about the potential new threats that could pop up with Wilson Fisk out of the way, and her investigation into organized crime. For gamers interested in delving into the new DLC and need a little help with it, there are some gameplay walkthrough guides available.

YouTuber MKIceandFire tossed up a near two hour walkthrough of the complete DLC. You can check it out below.

The DLC starts with Spider-Man making his way to the Manhattan Mocca Museum.

Make your way to the museum across town.

You can either take out the guys stealthily or you can go in web-a-blazin’.

There are a few guards with guns, so be sure to them out first. Also, the guys with crowbars will block many of your standard melee attacks so try to get around them.

Head to the top of the building and hop inside.

After a cinematic plays with Spider-Man examining a painting, you’ll need to take out more baddies. Use stealth to take down the guys; if they see you they’ll attempt to steal art and flee before the cops arrive.

You’ll need to keep stopping the baddies before they make a run to the exit.

Be sure to use your full arsenal of webbing to take down the bad guys before they make it to the exit. 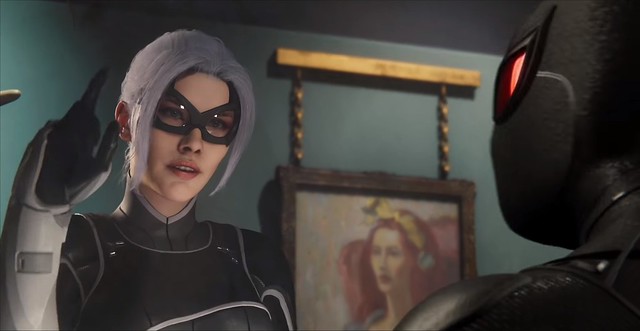 After another cinematic involving Black Cat, who looks rather SJW’d up, you’ll need to take out the brigade of rocket launcher men.

After another cinematic make your way to the blown up car in downtown. Use the remote spider device to disarm the four bombs. There’s one under a trash can by a building, one under the car near the blown up car, one inside the back of a truck (you’ll need to go up the ramp) and one under a taxi.

Head to the rooftop to talk to the old Det. Mackey, who is retiring soon who wants to solve the cold case for the original Black Cat.

Travel to the building with the yellow marker and bust open the power box to retrieve the art tube.

On the opposite side of town there’s a gang shootout. Beat up the guys with the guns and then a big fat man with a minigun will come out of the back of a truck.

Pepper him with web and take out the other guys until you whittle away his life-force and then take him down.

Follow the navpoint to the Bodega and then use the specs to spot Black Cat’s footprints along the side of the building. Head up top, use the kit to look at the building across the street and beat up the thugs.

During the cinematics you’ll find out that Black Cat is working with the Hammerhead crime family because they have her son.

Before Spider-Man can further question Black Cat, she leaps away. Spider-Man is then waylaid by having to take out Screwball’s gang just a short distance across town. Beat up the guys on the rooftop and then you’ll unlock the new Screwball challenges scattered across the town.

You don’t have to complete the challenges, though.

Proceed to the crime scene and use R3 on the right analog stick to scan for clues after talking to the EMT. There’s residue of a grenade where the guard got his retinas burned. Use the mini-game puzzle to unlock a digital trail that will lead you to some more thugs that you’ll need to beat up. 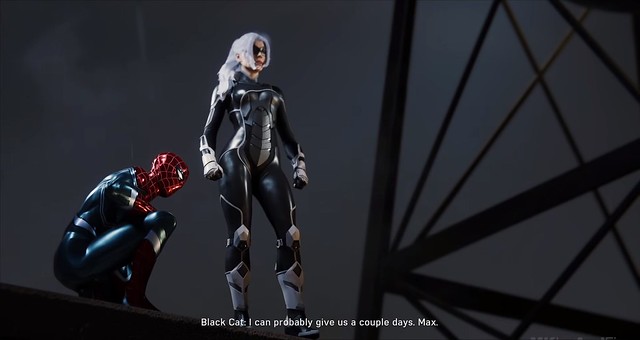 Head to the next navpoint and Black Cat will EMP Spider-Man’s web shooters, forcing you to chase her on foot like the olden days of dating when men had to chase women down and there weren’t hashtags shaming them for being men.

Chase down the Black Cat through a heavily scripted scene. Once you get close to her you’ll need to spam the R1 button to web her up.

After the cinematic wraps up you can complete a couple of side-quests before getting back to the main meat and potatoes.

The next main mission is to order a pizza from Eddies and go to the rooftop to eat after Spidey gets exhausted from spending all night with Felicia. 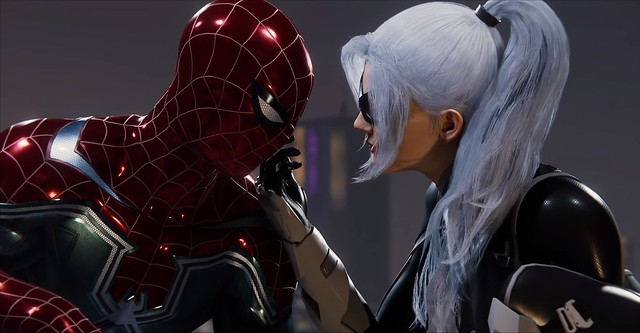 While Peter eats pizza, players will switch over to Mary Jane, who must sneak into Hammerhead’s compound .

Sneak around the boxes and press the Square button when you’re behind them to stun them and knock them out.

Get to the laptop, snag the shipping info and then make your way out of the compound using the distractions and the fan.

Spider-Man will need to take down some more thugs before moving on to the next mission, which is assigned to you by Black Cat. She’ll want to meet you on a rooftop to silently take down the guards. The idea is to avoid being spotted.

Use the wooden beams to string up all the guards to avoid being spotted.

Once you get done taking out the basic guys there’s a chaingun guy who comes in. Take out the scrubs and then use your focus attack on the fat man.

You’ll need to complete a few more side-quests to burn some time after completing the mission.

After completing some side-missions you’ll unlock the location of the warehouse where Black Cat’s son is being kept.

Black Cat will take out some guards along with Spider-Man; tag-team the men and avoid being spotted by the patrols and the snipers.

Take out the sniper at the highest point first by getting around behind him and using the building to web him up. The final container contains Sable International weapons and gear; a bunch of thugs with Sable weapons will show up and you’ll need to beat them all down.

Eventually you’ll get into the safe and discover that there was no kid, Felicia was just being a thot to string Spider-Man along because he’s like one of those Twitch weebs who throws money at those titty streamers.

Felicia leaves with the drive and your final mission requires you to track down Felicia to her penthouse as it explodes, ending the first part of the DLC.