One of the most iconic characters of The Witcher series is Triss Merigold, a powerful sorceress and lover of Geralt of Rivia. Triss became a recognized heroine in CD Projekt Red’s The Witcher trilogy thanks to her sexy design, fiery red hair, and those bold olive-green eyes brimming with ambition. In Netflix’s rendition of the series, they decided to swap the fair-skinned redhead with an olive-skinned brunette in the form of British actress, Anna Shaffer.

ScreenRant is reporting that Anna Shaffer was cast to play Triss Merigold. Shaffer’s past credits include playing Romilda Vane in Harry Potter and Ruby Button from Hollyoaks. The British-born born actress has mostly had small roles in various projects over the years, but this could end up being her big break if it doesn’t fail (but given a lot of the negative press centering around the casting of Netflix’s The Witcher that seems unlikely).

Triss is the second major character to be race-swapped after Yennefer was given the Indian treatment with Anya Chalotra put into the role.

Fans of the series and many Polish were so focused on trying to get Netflix not to cast a BAME in the role of Ciri – for which a casting call had gone out for a BAME version of Ciri – that they forgot to ride Netflix hard on not race-swapping the other major characters, such as Triss and Yennefer. Netflix did acquiesce to the fan demands and actually cast someone proper to play Ciri, but they went the opposite direction with the other two female leads. 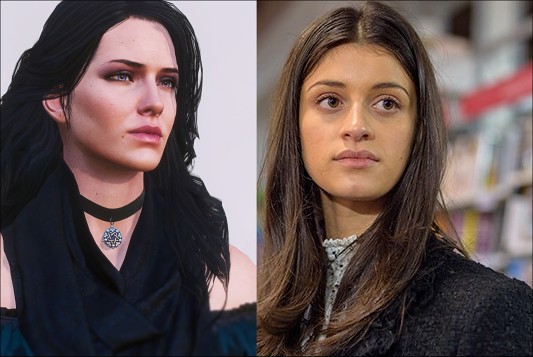 This should come as no surprise given that the writing staff of Netflix’s The Witcher made social media posts that could be construed as anti-Trump, and so it’s expected that given the staff’s open-borders advocacy they’re likely going to inject those kind of politics heavily into the TV show, especially since they’re already injecting that kind of influence into the casting decisions.

As you can see in the image template below, there are a lot more diverse cast members being featured in the show than what appeared in the game, with Netflix’s agenda clearly being on display. They also released teaser footage of Henry Cavill doing a screen test as Geralt. It looks kind of cheesy right now, but hopefully they’ll do his make-up right proper with scars and stuff, and maybe he’ll grow out a beard to help add some character and gruffness to his portrayal of Geralt.

(Thanks for the news tip Gemma)