Dark Star Game Studios and Another Indie’s Sinner: Sacrifice For Redemption is unashamedly classified as a Dark Souls clone. But don’t worry, it’s a good thing. You see, this game wants to court players who are used to hard-as-nails games; it’s built around getting good, literally. As you progress through Sinner you actually get weaker, not stronger. So it’s a race against time and a true test of your abilities as you attempt to edge closer to one of the game’s multiple endings while the difficulty continuously ramps up.

Thankfully, there is a complete gameplay walkthrough guide available for Sinner; Sacrifice For Redemption, whether you have the game on Xbox One, PC, PS4, or Nintendo Switch.

YouTuber AMHarbinger rolled out the 47 minute walkthrough below after spending more than eight hours trying to beat the game initially (and dying many times in between). Check it out below.

After the initial cinematic, which explains that the main character can’t remember anything other than that they’ve been branded as a “sinner” and they must take the first step to relinquish this branding.

After choosing fixed or free camera, you can start a new game.

You’ll need to get a hold of the basic controls and how to play. Thankfully they aren’t too difficult to master. You’ll use the left bumper to block or parry attacks. You can use the left trigger to perform an action, while your light and heavy attacks are done with the face buttons ‘X’ and ‘Y’ on the Xbox One controller or ‘Square’ and ‘Triangle’ on the PS4’s DualShock.

You can move around with the left analog and change whether to lock onto an enemy or not by pressing in the right analog stick. 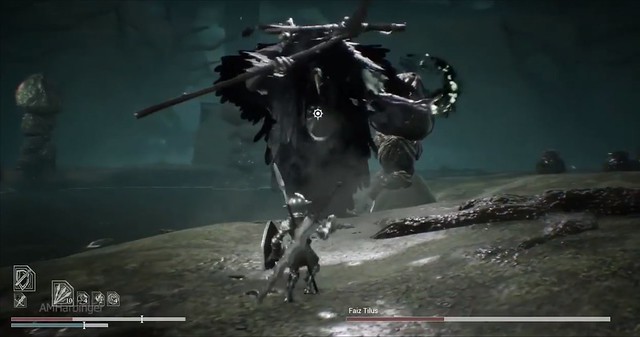 Proceed through the pathway into the first area. You can also listen to some of the maxims from the spirits lounging about.

Your first task is to make atonement at the tomb of Faiz Tilus. You’ll lose HP and stamina from your bar and then proceed through the portal to face off against Tilus in the rotten lair.

Rush in and attack the boss with a combo using your standard long sword.

Dodge back out of the way once he swings his scythe.

Attack him again and then proceed to dodge out of the way when the green poison mist surrounds him.

He will send out slug monsters. Proceed to run away from the slugs until they implode.

When Tilus goes up on the rock formation go away from him and run back to the edge of the arena. He will send out lots of poison gas. Some slugs will then come after you. Run away from the slugs and wait for them to fade away.

When the poison smoke fades away then run in close and wait for a doppelganger of Tilus to pop up. Kill the doppelganger.

Once the doppelganger is killed, you can then begin to attack Tilus again. Whittle down his life until he heads back to the center of the stage to shoot out a bunch of poison projectiles. Hide behind a rock until the poison projectiles stop, and then run in close to finish him off. 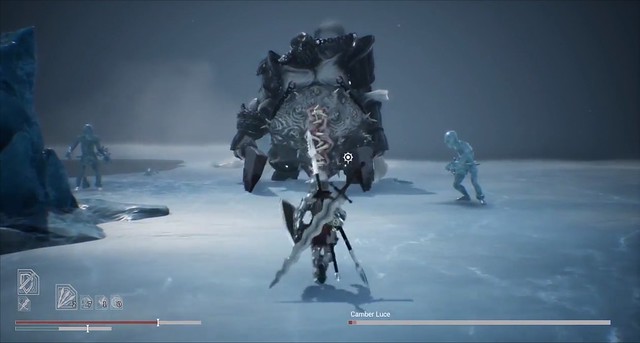 The next boss you’ll face off against is Camber Luce, the boss of Gluttony. The start of the fight requires you to dodge his attacks and attack him in between his attacks. The first part of the fight is a battle of attrition as you attack and dodge Luce’s attacks.

Once you get a fifth through his life, he will open up his stomach to devour you if you get too close. Be sure to step back and stay away from his stomach when it opens up.

When his life gets a third way down he will shoot out a short-range black soot from his stomach; be sure to run back from him when this happens.

Below the half way point, Luce will be gin to use his cleavers to break apart the ice, be sure to avoid getting too close to avoid falling into the pit.

He will then begin to charge up for an attack. The objective is to stand back and throw plenty of javelins at him when his life gets too low to avoid taking any damage. Rinse and repeat throwing the javelins to stun-lock him and prevent him from unleashing any devastating attacks until you finally finish him. 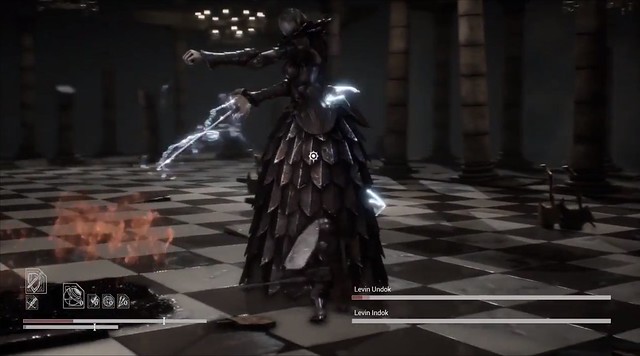 When you make your way into the arena to fight Indok in the Red Hall, charge at her and use your short sword to attack her metal dress.

Dodge her giant rapier attacks and get clear of her when she begins to electrify her dress, as she will unleash an AOE electric attack within a 10 meter radius.

In between each attack, keep wailing away at her battle gown.

When her life gets below the halfway mark, she will then bring in Levin Undok, the actual boss.

Rinse and repeat the method of avoiding the electric attacks and then take out Indok before focusing on Undok. Be swift and quick with your combos until you wipe the envy off the face of her severed head.

The next fight is against Proud Rhodes. You’ll lose your attack power as atonement before you face off against him. You’ll enter into the Lost Glory Arena.

Proud Rhodes is a very classical boss. Simply dodge his foot stomps, shield bash, and sword strikes for the first half of the battle, and attack him when he’s vulnerable.

Just be sure to watch out for his sweeping strikes to avoid getting caught up in the attack. Like all the other bosses, if your life is really low by the end of the fight, you can choose to redeem your HP at the expense of the boss. 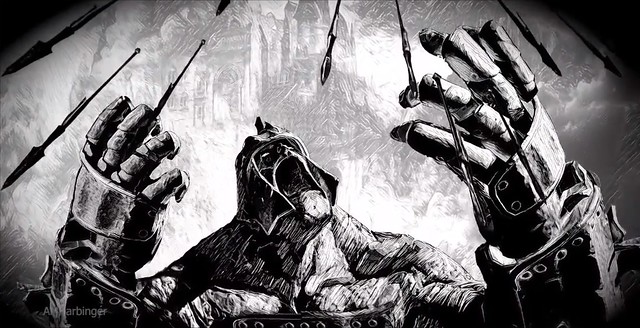 When atoning for the sins of Angronn, you’ll lose your defensive abilities and the ability to self-heal. This will definitely prove to make things challenging for some players, so be sure to get good.

Angronn isn’t like the previous bosses you’ve fought. He’s not actually on the platform where you’re located, instead he stands in the lava and attempts to smash you, bash you, swap you, or crush you. You’ll need to wait for Angronn to attack and dodge his attacks. He’s slow, so once you get out of the way of his attacks, you can then get in close and attack him.

Now there’s something to keep in mind, when his life gets a third way down he will begin smashing the ground with both hands. RUN!

The AOE attack isn’t just a standard attack, it will completely demolish the ground beneath you. When he gets close again, proceed to wait for him to attack and then attack his arm.

He will smash the ground again and then in the next attack he will have spears fall from the sky while also lobbing fire projectiles at you. Dodge his attacks, wait for him to strike and then attack his arms. You can also attack the spears/swords lodged in the ground and it will fire them back at his body to do damage.

After he smashes the ground and it breaks away, in the next segment he will have fiery undead warriors spawn, just wait for him to lob more fire projectiles at you and it will kill the spawns.

Rinse and repeat the tactics above until he’s killed.

The atonement for Lustful Chanel will decrease your shield’s ability to block, allowing it to shatter. At the Luna Lake you’ll face off against a very speedy and swift Chanel.

She uses dual blades and a bow and arrow.

Wait for her to attack and then strike her while she’s open. You won’t have long to attack because of how fast she is. Try to stay on her side or roll in circular motions to avoid her attacks.

When her life gets half-way down she will fire off a salvo of arrows that will chase you down. Keep running until the arrows stop falling. She will also fire a charged up arrow shot that has the ability to instantly kill you, be sure to dodge it.

Wait for her to go back to her hack-and-slash pattern before you resume attacking her.

When her life gets down to near depletion, she will transform into a giant clit with a mouth.

Proceed to wait for the tongue to take a swap at you and then run around from behind and attack. Keep using this tactic to avoid taking damage. Chanel will then begin to fire creamy liquids at you in all directions – this can be difficult to dodge because you likely won’t have enough stamina to keep dodging, so the best tactic is to dodge once and then run away until she stops spewing out the semen of scurrilous fellows.

You’re almost near the end. Your atonement for Yordo is a harsh one. When you’re completely exhausted you will collapse, leaving you open for attacks. Use your stamina wisely.

You’ll venture to the Blasted Lands to fight Yordo, who stands among a horde of soldiers. Run up fast and attack him to knock him out from among the soldiers using your two-handed broad sword.

He will have a number of Spartan-like soldiers guarding him after your initial attack. Once his life is a third way depleted, he will run back behind the soldiers who will then encircle him and protect him from your attacks.

He will also have the soldiers disappear and reappear surrounding you when he blows his horn.

You must fight him smartly. When he goes to blow his horn run up and use your broad sword to strike him down and then quickly run away to avoid being impaled by all the soldiers.

When Yordo’s life depletes below the halfway point he will replace the Spartan warriors with men with two-handed broadswords.

You’ll have to not only watch out for Yordo’s attacks but also dodge the soldiers using their broadswords. You can also unlock an achievement for killing Yordo without attacking his guards, assuming you have the skill to accomplish such a feat.

After you defeat Yordo you will be transported back to the hub where you will need to face off against one more boss. 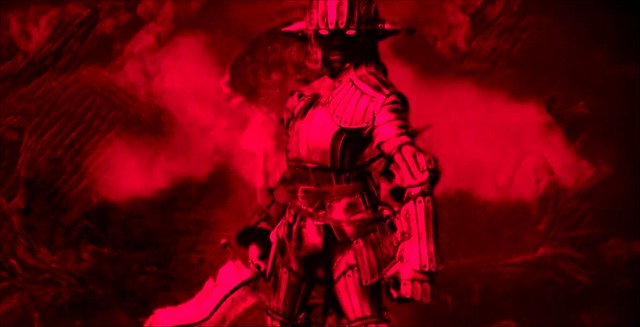 You will face off against… yourself. The fight will take place in the Burning Purgatory. It’s probably best to use the two-handed broadsword, especially since your shield will take irreparable damage during the fight.

The trick to the fight against Adam is to use patience. Wait for him to strike and then use the broadsword to get in a hit or two. Too many strikes and you’ll get fatigued, leaving yourself open for attack.

After the halfway point in the fight, Adam will switch to using a flaming broadsword. Again, wait for him to attack and then get in a strike or two. Remember, the key to winning is patience.

Don’t hesitate to only take one or two strikes in order to whittle down his life.

Be sure to keep your distance when he uses his heavy attacks, as they will initiate a flaming AOE attack.