Vermon Shaw from Game Grumps recently took to the PlayStation Blog to announce that Dream Daddy: Dadrector’s Cut will be releasing on the PS4 starting October 30th at the end of the month. The Dadrector’s Cut will include the main game along with new sidequests, and new mini-games, and additional cut content.

The gay dating simulator managed to sell several hundred thousand copies, according to Steam Spy, since it’s release in late July of 2017. 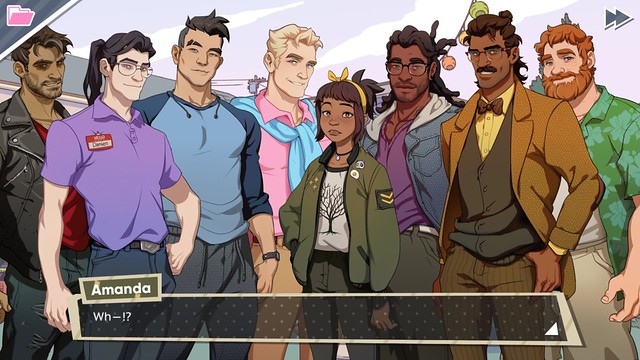 As mentioned by Shaw, the game was talked about widely in Left-wing media organizations (which means every major entertainment and enthusiast media outlet) as it received a lot of high praise for further promoting the SJW agenda…

“The smash hit game went on to be featured in numerous best-of lists, garnering mentions in Wired, the BBC, and Pitchfork (for its slamming theme song by Baths). It somehow superseded Overwatch as the most talked-about game on Tumblr, and for one day it managed to outsell PUBG as the most-bought PC game on Steam. Afterward, Oni Press published a comic book starring all the Dream Daddies.”

The gay dating simulator features a lot of senseual content themed around the topic of gay romance and gay sex. However, Sony had no qualms allowing the game on the PS4.

Now this isn’t really news, save for the fact that Sony recently denied the Western release of Omega Labyrinth Z on the PS4, forcing PQube to cancel the game at the twelfth hour even AFTER it had already been rated by the ratings board.

Sony also recently forbade XSeed Games and Marvelous Studios from including the interactive physics mode in Senran Kagura games called “Intimacy Mode” as part of the company’s new policy that seemingly prohibits the inclusion of sexually thematic content aimed at straight males. This new policy forced XSeed to delay the release of Senran Kagura on the PS4 as the localization team was coerced into removing the “Intimacy Mode”.

It’s interesting because the rating on the PlayStation Blog is only 2.87 out of 5 stars, but the only comments that are visible are those praising the game’s appearance on the PS4.

Over on the YouTube page the atmosphere is a lot different, and gamers are definitely making their voices heard.

As some pointed out in the comments, a gay dating sim is okay for the PS4 but not Super Seducer. PlayStation fanboys defended Sony’s decision to block Super Seducer from launching on the PS4 by calling Richard La Ruina a “con artist”, while also defending Sony’s decision to block the launch of Omega Labyrinth Z and Nekopara by saying that those are games where you touch “underage girls”.

As noted by some non-SJW gamers, there’s an obvious double-standard of blocking dating sims and sexy games aimed at straight gamers, while allowing and promoting gay games on the PS4.

So far, the only thing we know about why the games aren’t being allowed on PS4 is because there’s a “new policy” that Sony is enforcing that prevents certain kinds of sexy games from appearing on the PS4, namely games aimed at straight males.

It appears as if Sony has no qualms about allowing a sexy game on the system so long as it promotes the SJW agenda.