The first nude mod for Soul Calibur VI has become available for download courtesy of modder Sakura4 from the Undertow.club. The mod makes it possible to turn male characters into the game nude, and expose their pubic hair, genitalia, and ballsack, something that the higher-ups at Sony are probably okay with given the company’s current direction. It also makes it possible to make a full package futanari.

You can download the mod right now from over on the Undertow.club page.

They replace the fundoshi or loincloth for the male or female characters, and as depicted in the image below, when you install the mod select the fundoshi from the top right corner of the character creation menu to apply the nude mod. 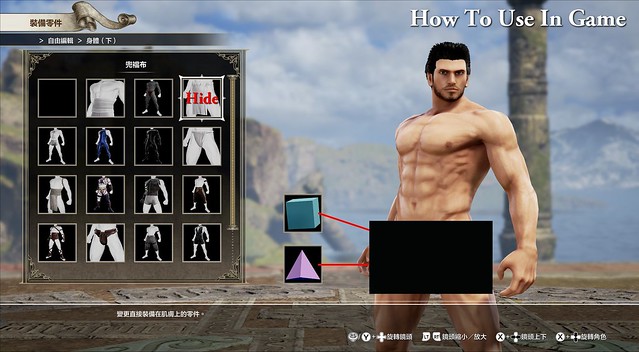 The two pieces will add pubic region hair and the full-package genitalia for males or female characters.

In order to install the mod you’ll need to download the full zip bundle, which totals 50.4MB, along with the hide fundoshi pack.

You will have to create the ~mods folder manually, and once you do so you’ll then be able to load up the mods in-game.

As mentioned, this includes the ability to apply the modified fundoshi on female characters, enabling you to create full-on futa characters. Obviously, clicking to enlarge the image below is NSFW. This opens up a whole new slew of possibilities for the Soul Calibur VI modding scene.

And don’t worry, Chinese modders are currently hard at work on hexing the female meshes to work through some roadblocks so that they can produce the nude female mod soon.

Soul Calibur VI is currently available right now for Xbox One, PS4, and PC… but only the PC version lets you battle against other opponents with a bare schlong.