The Council: Episode 4 Walkthrough And Choices

Big Bad Wolf and Focus Home Interactive’s The Council: Episode 4 – Burning Bridges released for PC, PS4, and Xbox One on September 25th. The episode picks up where the last one left off depending on the choices you made and how well you did at solving the final puzzle in Episode 3. For those of you who need a little help with getting through the latest episode there is a walkthrough guide available.

YouTuber AMHarbinger has the entire Episode 4 content for The Council laid out for you, which you can check out below.

The episode starts with Louis and his mother entering into the catacombs. If you managed to complete the puzzle without Louis losing his arm, his mother will implore him to find out more about the lance of Longinus The Centurion, which was the spear that pierced the side of Jesus Christ.

You can also inquire of Louis’ mother as to why she shot Emma’s sister. However, Louis mother will be evasive and whisk off to the wharf to prepare for their departure once Louis gets a hold of the lance.

Before attempting to acquire a lance from the catacomb – since you can only take one – you must go talk to Piaggi to find out which of the proper lances you should acquire.

A Confrontation will begin. Be direct when Piai asks if you’re looking for the lance. Tell him “Yes” to complete the segment.

When he asks if Louis has told anyone else about the lance, tell him yes – that you’ve talked to Louis’ mother about the lance. This will complete the second Confrontation step. 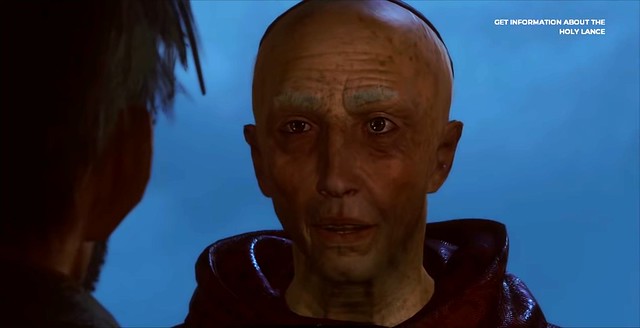 Piaggi will reveal that one aspect of the lance to take note of is that it’s covered completely in the blood of Christ.

You can attempt to gain more information about the lance by talking to President George Washington, but he will only direct you to ask Wollner about the lance.

If you have an item to increase Louis’ perception, you can decipher the letter Wollner was writing. The letter reveals that Wollner was set to meet someone on the landing.

If you have enough points in occultism, you can examine Wollner’s books about Loginus and Louis can take the book.

Just then Wollner will come into the room and a Confrontation will start.

Tell Wollner you were looking for him and it will succeed in the first step of the confrontation.

Wollner will accuse Louis of looking for the lance; deflect by asking what Wollner is so afraid of. This will complete the next step.

For the final step, tell Wollner you were doing the snooping for Wollner. This will complete the third step of the Confrontation.

If you’re successful, Wollner will reveal that the lance would have been made of copper given that the centurion would not have been noble enough to have a golden lance.

Louis will also uncover that the lance is also engraved with the first symbol of the Christians, featuring a fish.

Go to the room and examine the statue of Longinus in Mortimer’s office and if you examine the spear you’ll discover that the lance has the fish symbol on it.

Go to the painting and examine it and “Distrust” it; using psychology Louis will deduce that the lance is spear-shaped.

With the information in tow, head back into the catacombs and go pick out the lance that has a copper tip with the engraving of the Christian symbol, as pictured above. Also find and collect as many items as possible, especially golden elixir.

Exit the catacombs and make your way back toward the mansion but you’ll end up in another Confrontation.

You only get one chance. Tell him that you were looking for Louis mother to complete the first step.

During the second step of the Confrontation he will ask you to hand over the item you took from Mortimer. You can choose not to give him anything or you can give him Mortimer’s encyclopedia to satisfy his curiosity, which will complete the Confrontation.

Make your way through the mansion and attempt to head through the main foyer toward the exit in order to reach the wharf. However, Mortimer will waylay Louis.

Mortimer will state that Sarah is attempting to lead Louis down the wrong road. You can either question him or say nothing.

Mortimer will challenge Louis about believing in demons – tell Mortimer that you know he’s a demon and he will admit to it.

Mortimer will reveal that he is a demon that for nearly six hundred years has inhabited the body of Lord Mortimer.

He explains that the demons have been around since the dawn of time and that they have the ability and power to influence the minds of men, oftentimes looking to protect men from themselves and sometimes helping them to succeed.

You’ll have the ability to ask Mortimer multiple questions, including finding out that Mortimer influenced Elizabeth’s mind to force her to kill herself.

During the conversation it will be revealed that Mortimer is Louis’ father. Just then Jacques Peru will burst in.

A Confrontation will start with Peru, where you’ll need to convince him not to kill Louis. Tell him that you don’t know what’s happening to succeed through the first step. For the second step, tell Peru that Louis is still the same and that just because he’s revealed to be a demon that he’s still the same. Finally, tell Peru not to allow himself to be killed, tell him that he needs to think about his daughter growing up without a father.

After talking with Mortimer proceed to the wharf to confront Sarah.

However, if you talk to Mortimer you will fail to arrive on time to save Sarah from Emily.

Sarah will reveal that she is actually Mortimer’s daughter, but she was cast aside because she didn’t possess the demon ability to possess people. Sarah will leave on the boat and you can choose to give her the letter and her bag. As she leaves she will reveal that Louis can kill Mortimer by using the lance on him.

Back in the room you’ll have the choice to determine if the disposition of being a demon is a curse or a blessing. Also, you’ll be able to question Sir Gregory, who believes that demons should rule over humans.

You can either choose to encourage the conversation toward allowing man to have the freedom of choice, or to adopt Sir Gregory’s point of view of subordinating man to subjugation.

After talking with Gregory, go to Mortimer’s office and talk to him about the conversation.

When talking with Mortimer, it will be revealed that Mortimer wants to establish the Illuminati in order to help “elevate” man by controlling their interests and giving them food, shelter, and entertainment in order to keep them in “slumber”.

Mortimer will present Louis will the option to unlock another ability: the ability to take control of another being.

You can choose to engage in Mortimer’s request to utilize Louis’ power to control another being, or you can decline the request.

Go and talk to Giuseppe Piaggi, and you can either use the demon powers to take control of Piaggi, or you can warn Piaggi that demons actually exist.

You’ll also need to use the stamp with the Pope’s signature: Floret in Domo Domini on it.

After finishing the letter, Wollner will interrupt and a Confrontation will start.

You can tell Wollner that Louis was given a tranquilizer.

Wollner will attempt to kill Louis, but you can delay the attempt by telling him that no one will be killed in Piaggi’s room.

Once you get back in Louis’ body, go to Emily’s room and it turns out that Emily is Louis’ sister. That’s right… not only did they steal the Star Wars plot-twist that Mortimer is Louis’ dad, but also the incest story as well. Except, The Council goes a bit further because if you chose to bang Emily MULTIPLE TIMES then it means that Louis had a taste of his sister’s poontang pie on multiple occasions!

If she gets pregnant then it means he would be both the father and the uncle!

Go back to the red room and talk to Mortimer about your demon powers.

Sir Gregory will interrupt and attempt to influence Louis to join his side, or you will be given the choice to support Lord Mortimer.

You’ll be given the choice of either accepting Louis’ demon nature or you can choose to behave like a man.

You’ll then be able to choose to join forces with either Mortimer or Sir Gregory.

The episode ends with Mortimer gathering the rest of the council and announcing that it’s time to lay down all of their cards in preparation for the big showdown in Episode 5.