Sony’s new censorship policies for the PS4 has claimed another victim. This time Compile Heart’s Arc of the Alchemist was censored right out of the gate for its release in Japan.

Over on the Idea Factory International forums, user Kazkari outlined the changes to one of the characters, who had her entire bust line covered up so none of her cleavage could be on display. 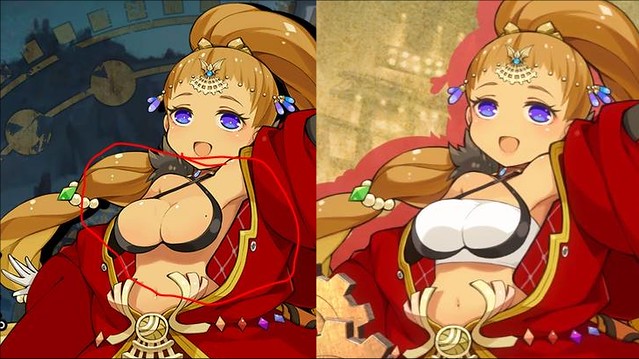 As you can see, her big ‘ole anime boobs have been covered up as part of Sony’s continued ecchi extermination taking place both in the East and the West.

No anime titty is safe from Sony’s squad of censorship terrorists.

The evidence isn’t just in the artwork, though, it was also spotted in the trailer itself. As you can see below, at the 55 second mark in the trailer uploaded on October 18th, 2018, the dark skinned chick with the big boobs has her titties out and on full display, with a beauty mark on her left breast.

Now take note that in the second trailer, published on November 21st, 2018, Compile Heart had a change of heart after apparently receiving some sort of censure chastisement from Sony. Now if you fast-forward to the 2:17 mark, you’ll see that the art has been completely changed, and the dark-skinned beauty no longer has her beauty mark on display for prying eyes. Instead, she now has a white tube-top on to cover up her big ‘ole titties.

It’s almost like Sony is single-handedly trying to kill all the FPM (faps per minute) within PS4 games in Japan and in the West.

For now the only censorship spotted has been the tube top change, but as we’ve seen with other games affected by the new PS4 censorship, it’s not uncommon that other changes may have been made as well. In some cases entire stories had to be altered or some CG scenes have had to be completely redrawn to accommodate Sony’s new policies.

It appears even seemingly innocuous games like Arc of the Alchemist are being affected by these policies even in subtle ways that most people might not notice at first. Eventually, however, developers are going to have to start censoring their games before character art is finalized, which means that for many future titles we won’t even know that the game has been censored.

(Thanks for the news tip Narmy)