There’s a high-quality created character making the rounds in the Soul Calibur VI scene, and it’s none other than business mogul and current President of the United States, Donald Trump.

Event Hubs picked up the news from a tweet that’s been going around on social media that features the Trumpster in all his muscled glory, touting a large sword with a single hand and the wind-swept hair that he’s become known for.

Japanese gamer Shokaku shared the images on Twitter back on November 6th, 2018, giving gamers a solid look at the POTUS, as he grabs history by the front hole and makes it great again.

Bandai Namco seems to have gone the extra mile to actually allow gamers to actually have fun instead of locking them into censorship like some other companies. So not only do you get to enjoy the bountiful booty of 2B from NieR: Automata and all sorts of boob and butt jiggle, but you also get to make fighting games great again by playing as Donald Trump. 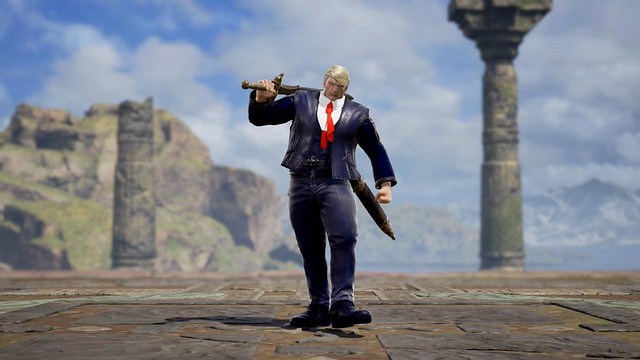 Unfortunately we don’t get any video documentation on how to actually create Donald Trump in Soul Calibur VI, and sadly all the other Trump creations are no where near as good as the one that Shokaku made.

This means that if you were hoping for a basic rundown of the different stats, hair, and clothes, you won’t be able to get the details the way you might like.

There is a general itemization of his gear but it’s all in Japanese. 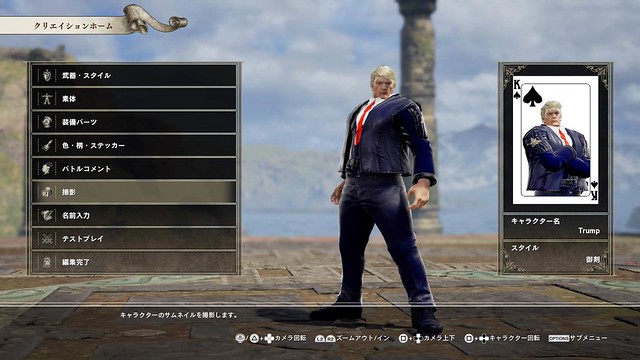 The good part is that you can still take a gander at the screenshots an attempt to figure out all the minutiae that went into Shokaku’s creation.

Unlike Nexon, you can actually create and play with your Trump creations online, as opposed to what’s happening with MapleStory 2, where MAGA hats and anything pro-America created by other users is being wiped off the Meret Market.

Soul Calibur VI is available right now for the PlayStation 4, Xbox One, and on Steam for PC.

(Thanks for the news tip np complete)