CrazyBunch and Assemble Entertainment’s Leisure Suit Larry: Wet Dreams Don’t Die quietly crept out of the developmental incubator and onto the Steam store for PC gamers. The new point-and-click title sees players assuming the role of Larry once more as he attempts to navigate the modern day dating scene after being out of the loop for some time. For gamers interested in getting through some of the puzzles and attempting to knock boots with some of the ladies, there is a walkthrough guide available.

YouTuber 123Pazu has up a playlist of the game, covering the different chicks that Larry can hook up with and how to get past some of the puzzles. You can check out the video walkthrough for Leisure Suit Larry: Wet Dreams Don’t Dry below.

The game starts with an illegal immigrant talking about a prophecy, and then eventually it swaps over to Larry, who wakes up in a dark rom.

You’ll need to turn the lights on in the room.

Go over to the control panel by the pole and press it. Then activate the map and flip the lever, which will turn the red control panel light to green.

Press the green button and an elevator will lower.

Go into the bar and some millennial will be on her smart phone in the corner.

You can talk to Becky Butter – she’s a social media junkie.

You can talk to her about losing her traction, and she’ll drone on and on about some stuff, along with wanting a “Craft Beer”. 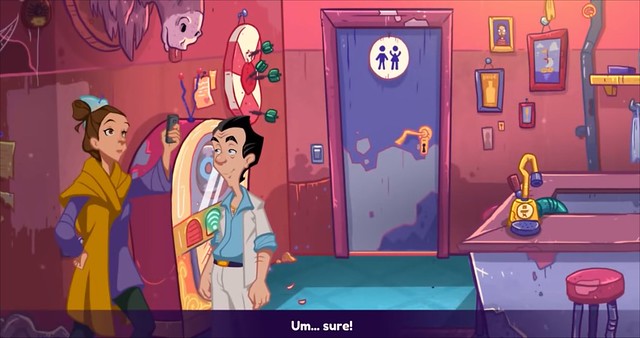 You can talk to the bartender. He’ll break the news to Larry Laffer that he’s been gone for a long time.

Talk to Becky again and you can ask her about her smartphone, and then talk to the bartender again to request a beer and place it the beer in your suit.

Go back over to Becky and go up to your inventory using your mouse and then give the beer to Becky.

Larry will get sick and will need to go to the bathroom. Talk to Lefty, the bartender, again.

Get the key and use it on the bathroom door.

Take the hardwood stick from the sink, and then take a role of toilet paper from the side of the toilet. 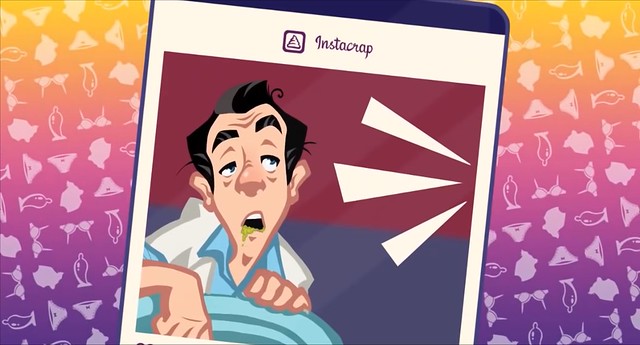 Put the toilet paper on the stick and then use the toilet-roll stick to fish the cell phone out of the rat crud.

Talk to the fake Cortana smartphone.

She’ll request to be returned to the Prune headquarters.

Tell the PiPhone Larry’s name and tell her that his number is 69.

Eventually the PiPhone will call an Unter. Simply exit the bathroom and go outside to get into the Unter.

During this segment the game will show the opening credits while the PiPhone – which you can name by choosing from a list of preset names – will show Larry a retrospective of everything he’s missed over the years.

Go into the Prune headquarters – the fake Cortana will request for Larry to take her back to the CEO.

If you tell the man-nerds working on the show floor about the fake Cortana, they’ll give you an access card to use the elevator, once.

Once you get into the elevator and head up top, you’ll be able to talk to the heads of Prune. You can also attempt to squeeze a date out of the hottie by attempting to trade the prototype phone for a date.

However, in order to get a date with the hot chick you have to get a 90 rating on Timber. She’ll give you a voucher for a PiPhone so you can install Timber, the fake Tinder app.

Head back downstairs and talk to Kyle; give him the voucher and Larry will be given a PiPhone.

Activate the phone and ask the man-nerds how to use the smartphones.

They even manage to squeeze in a dig at loot boxes while Larry sets up his phone.

Once the phone is setup the Prune clerks will require Larry to fetch them some items in order to help him setup his Timber profile.

Talk to Lefty to get a key to enter into the brewery in order to fix the brew for Lefty.

Use the key on the door and go into laundry/brewery.

You can acquire Erin’s used panties from the laundry basket.

Go into the bathroom and Becky will have mad diarrhea. Give her Erin’s panties.

When you come out Becky will be gone. Go into the bathroom again and take the band-aid on the side of the toilet. Also grab a coin off the wooden desk.

Go over to the trash can and the diarrhea-filled panties that Becky soiled will be in the trash can. Larry won’t want to touch the feces-encrusted panties, so use the draw string to pull the trash bag closed and then take the entire trash bag.

Give Kyle the trash bag that contains the diarrhea-filled panties that Becky disposed of. Kyle will smell the trash bag filled with the smell of Becky’s diarrhea.

Kyle will then help you setup your Timber profile.

After setting up the profile, the fake Cortana will notify Larry that several new profiles have been matched up with Larry. You can accept a number of friends on the Timber, including some gay gays.

You’ll be able to visit the hipster bar at the top of the map once you exit the Prune store.

Talk to Everitt and Atticus.

Once you get done talking to the two douche bags, grab a free piece of candy from the jar on the right.

You can talk to the punk-rocker chick, Lemma, in the corner

You can use an awful pick-up line on Lemma, who you will match up with on Timber. Ask her if she wants to go out, and then tell her that she doesn’t waste any time, and Lemma will make it known that she will bang Larry after her concert.

She will first need to get her drummer back, and she also wants some posters plastered around the city. Ask for the posters and she’ll give Larry the posters to post up around town.

Once you get done talking to Lemma grab the flower from the top left hand corner. Go over to the right hand corner of the wall near the exit door and place one of the posters over the blue poster.

Go across the street to the sex shop.

Talk to the mulatto fellow in the sex shop, Richard Ryder, and talk to him about the Timber photo and he’ll offer to give you a professional photo for Larry’s timber photo.

Talk to the old lady at the sex shop and then attempt to stick a poster on the front counter – the clerk will ask what the poster is for, and you can tell her it’s for a sex toy. She’ll allow Larry to put up the poster.

Attempt to go in the back room, but the old lady will stop Larry. Ask her if that’s where the real kinky stuff happens and the fake Cortana will note that there appears to be a second address located at the location.

The old lady will take Larry to the back room, which is actually a quickie-mart.

Mess with the slushie machine and take the free slushie. Exit the back room and go up front and take the unicorn mask – but the old lady will stop Larry from leaving with the mask.

When you exit, put up another one of the concern posters on the front of the gym on the right side of the entryway.

Go inside the gym and take the toy from the cute dog’s mouth.

Inside the gym, put up another poster on the right side of the door but on the left of the gym attendant.

Open the first-aid kit box and take the disinfectant wipes.

Head over to Lefty’s, and put up a poster just on the left side of the entry.

Head inside Lefty’s bar and put up a poster on the wall to the far lower left side.

Head in the back and there’s a piece of paper you can grab underneath the dripping wet section of the wall.

There’s some rainbow-colored chewing gum on the bar. Take it.

Go into the laundry room with the brewery and go over to the wall on the far right side of the room. Put up a poster and the wall will crumble to reveal an old encapsulated fossil.

Take the pure gold tooth from the fossil.

Go upstairs and the door is locked. Tell Erin that the Timber app matched them up together.

Ask her about her cam show but she’ll want the internet access before giving Larry what he wants. Erin tells Larry to ask Lefty about the router, and that she also has a parcel that’s left at the Leisure Suite.

Take the wrapped condom from the edge of the bed along with the rainbow-colored chewing gum.

Go over to the manhole and take the roll of licorice you got from the hipster store and attach it to the shoelace. Attach the chewing gum to the licorice-shoelace.

Use the makeshift fishing rod to fish out the key that’s down in the drain.

Go back inside the bar, head upstairs, and use the key inside the jewelry box on Erin’s nightstand by the stairwell.

Take the pick-up slip inside the jewelry box and head over to the strip at the top of the map. Go over to the Leisure Suite and tell the old lady that Erin sent him over to pick up a package.

Before heading back to Erin’s place, make your way to the Prune headquarters and place one of Lemma’s posters on the empty display stand on the right of the entryway. On the left side of the entryway there’s an empty cup. Take it.

Head back to Lefty’s bar and use the rubber gloves on the jukebox router outlet to unplug it and plug it back in. This will fix the router.

Head back upstairs and give Erin the package and tell her that the router is fixed.

She’ll reveal to Larry that she wants to become a real stripper and not just settle for doing cam shows, so Larry is fresh out of luck for scoring some of Erin’s coveted pie, which is a real shame because she was hot, too.

Go back to the hipster bar and ask Lemma about the drummer. She will reveal that her drummer’s name is Stix. Ask the two hipster douche bags about Stix: ask about his clothes and hair. They will reveal that his beard is gray, he has a red bandanna, and a biker jacket, and he smokes. He also had a huge fight with Lemma.

She also reveals that Stix has an issue with alcohol and gambling. Go outside and grab the cigarettes from the ash tray near the front entrance.

Give Lefty all the details about Stix, including his hair, bandanna, jacket, and the brand of cigarettes he smokes. Lefty will inform Larry that he can take Unter to Pier 69 where Stix usually hangs out drinking and smoking.