Gamers really seem to love the first-person virtual reality shooter, Zero Caliber. The game from XREAL Games sees players teaming up with their buddies and taking down the bad guys using realistic weapons, realistic weapon handling, and taking down bad guys in a dystopian vision for the future of the United States of America. The co-op campaign centers around a story that takes place in the near-future where a bunch of foreign religious zealots attempt to take control of the U.S., and it’s water supply, and it’s up to the hard-boiled, red-blooded soldiers to fight back with the might of the American spirit to make America great again.

Zero Caliber sports full locomotion and dynamic weapon handling where players can choose how they hold, handle, and fire selected weapons. This includes using single-handed aiming, two-handed grips, or aiming down the sights by actually bringing the weapon in close.

It’s a lot more involved than I thought it would be, allowing players to modify almost every important aspect of the gun, from the stuck to the sights, and from the attachments to the barrel, you’ll be able to modify your arsenal with the kind of weapons that best suits your play-style.

Most shocking is that the gameplay looks really solid here. Usually VR games are extra janky and very jerky when it comes to gun-handling and recoil. In some cases we’ll see that the guns have no recoil at all in order to compensate for the jerkiness of the motion wands and their poor readability from the lighthouse trackers. However, here we see that XREAL Games took time out to make sure that the guns have recoil, they have some kickback when fired, and they actually look fun to use.

Fighting in the game isn’t a walk in the park, though. You can die just as easily as you can kill, which is why you and your teammates have to utilize teamwork and cover to create flanking maneuvers, out-gun the opposition, and exercise proper field tactics to come out victorious.

You can also blind-fire, peek around corners, duck, crouch, go prone, and even clear and vault obstacles standing in your way. 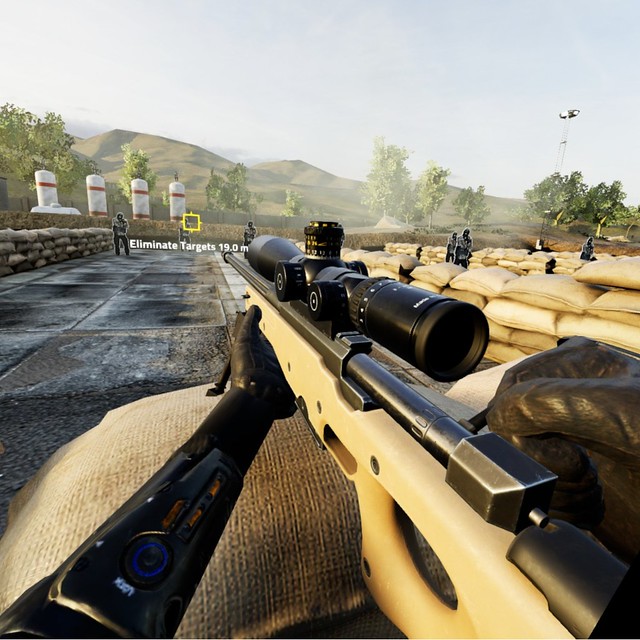 I was surprised about how well the game looked and how good the graphics are, especially for a VR game.

Even though Zero Caliber is still in Early Access, gamers are giving it a lot of positive feedback. At the moment the game has a mostly positive rating, with most gamers commenting on how good the shooting feels and how well the co-op campaign works.

You and your buddies can team up and hone your gun-handling skills as you prepare yourself to defend the United States from foreign invaders.

This is definitely a game to keep your eye on if you still have a dust collector known as a VR HMD.

While those things are overly expensive and mostly a waste of time, every once in a while we get a game like Zero Caliber that makes it worth your while.

The game is currently in Early Access on Steam, so not all of the content is finished and the co-op campaign mode still doesn’t have the second half of the story implemented, but they will get around to adding more challenge missions, more weapons, more weapon attachments, and further polish to address the bugs and glitches found while the game is in Early Access.

You can play the game only if you have an HTC Vive, an Oculus Rift, or a Microsoft Mixed Reality headset. For more info feel free to visit the Steam store page.