Video game journalists were called out back in 2014 for being corrupt. Various leaked logs from their inner circle revealed that they had adopted specific political leanings that stood in opposition to the core audience of gamers. When gamers refused to adopt the extremist views being preached by the media, journalists concocted a narrative that the consumer revolt known as #GamerGate was a “harassment campaign”, despite the fact that neither a peer reviewed report from WAM!, nor the FBI could find evidence to verify the claims made by the media.

Fast-forward four years later and the media is still smearing people in relation to #GamerGate because they’re a dying medium that hates competition, independent thought, and the gaming community. This became evident when sites like Eurogamer and The Daily Dot decided to malign a former employee of GOG.com named Sean Halliday, who was going to be hired by Jeremy Hambly from TheQuartering for a new gaming website called Exclusively Gaming. The site is currently being funded over on IndieGogo with the intent of being an apolitical hub for video games.

In fact, it was Sean Halliday’s apolitical stance and unwillingness to get involved in the culture war that allowed him to perform as well as he did as a community manager while at GOG.com. Hambly sought out Halliday and brought him on as a interim moderator for a Discord channel after Halliday was fired from GOG.com back in October for tweeting out the following message. 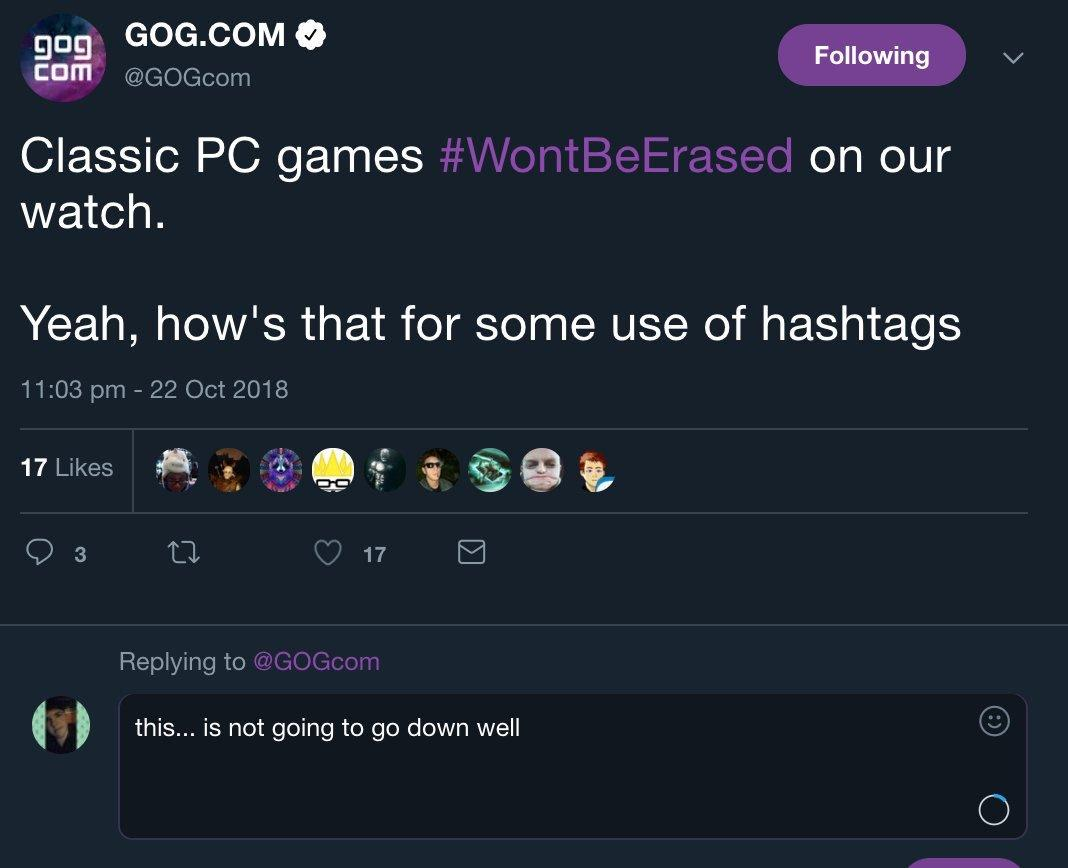 Eurogamer’s article about Halliday is a short retelling of how he got hired at GOG.com, how he got fired, and the emotional anguish that came with the firing.

The Daily Dot then picked up the news and went a step further, attempting to paint Halliday as some sort of comical villain. The headline and image for the article say it all. However, the evidence within the Daily Dot article betrays its intent, given that after “infiltrating” the Discord channel and capturing some of Halliday’s comments, it becomes painfully obvious that Halliday really does want to maintain an apolitical stance. Yes, he was actually against people using “SJW” as a pejorative.

But this didn’t stop people from being angry at him.

The Daily Dot points to a number of Social Justice Warriors who wanted the editorials about Halliday to paint him as less of a victim and more of a villain, because in their minds if someone commits wrongthink apparently losing a job isn’t enough, they also have to be castigated for the rest of their days.

boo hoo hoo, I broke down sobbing after my shitty bigoted views got me fired

Also, are we really expected to believe his claim that he used certain hashtags without looking up their meaning? If he’s not lying, then he wasn’t good at his job in the first place.

Eurogamer’s piece attempted to avoid blatantly labeling Halliday as an enemy against the Left, but the questions they aimed at him and the way the article was framed made him seem like some sort of #GamerGate sleeper cell who was either covertly malicious or naively inept.

The framing of Halliday as being out of the loop of #GamerGate became one of the focal points of attention in the article, as they recalled the incident where he tweeted out an image of Postal 2 featuring a gravestone for games journalism, which showed that games journalism had died on August 28th, 2018, which was the date when games journalists collectively worked together to berate and attack their own audience.

Despite Halliday claiming that he only picked that gif because it was the only safe for work image from the trailer, Eurogamer’s piece eventually led to the comment section beneath the article berating Halliday for not being more in-tune with American politics surrounding the culture war.

One user actually called Halliday a “bore” and “naive” for trying to avoid being dragged through the insanity that is the culture war.

And yes, the Eurogamer equated any sort of criticism of Jonathan McIntosh and Anita Sarkeesian as possibly being associated with #GamerGate. The entire comment section devolves into the one thing that Halliday stated that he was actively trying to avoid: trying to force political sides.

When Eurogamer outright asked if he was a supporter of #GamerGate, Halliday responded by saying…

“I’m certainly of the view there is a discussion to be had about video game press and the industry, but I disagree with how most of the GG crowd handle that – though I can say the same about the very liberal side of the culture too.

“I don’t really subscribe to any group. I find the whole concept to be a little toxic in general. I’m a huge believer in just talking to people and understanding them, but some you simply can not do that with.

“As for harassment of people, insulting them and all that, no I’m not a supporter of that in any shape or form. Same with any walk of life … the world’s rough enough without us attacking each other.

“But as we discussed, I’ve been on the fiery end of both ‘sides’. That highlights a problem with modern society in general: if you don’t fully commit yourself to a cause or a label, you’re seen as fair game to attack.”

But the main problem is that only one side is actively going out of its way to harass and denigrate him.

Social Justice Warriors doxed Halliday courtesy of ResetEra and proceeded to call up Halliday’s family to harass them, as well as attempted to track down Halliday to reproach him over the tweet that he was fired for.

Neither The Daily Dot nor Eurogamer actively condemned Social Justice Warriors for this behavior. This media attention to shame and devalue Halliday within the gaming industry resulted in him parting ways with Hambly and backing out of working as a moderator for Exclusively Gaming.

Jeremy Hambly from TheQuartering did condemn the harassment, however.

In one of his latest videos covering the topic, he took both Eurogamer and The Daily Dot to task for dragging Halliday through the mud for no apparent reason other than to ruin his life within the public sphere.

Take note that Hambly advises gamers to do the complete opposite of how the game journalists behave, telling people not to attack, harass, or badger the journalists and Social Justice Warriors who exhibit uncouth behavior. Instead, he advised the community to stay focused on the goal of getting Exclusively Gaming funded and up and running to combat the broken state of video game journalism, saying…

“Because this website is gaining funding – and we now have over 1100 backers, we’re starting to get close to some really important stretch goals – they are going to continue to attack us. What I would ask is that you don’t attack back, and that we focus on our core goal, and that is giving gamers a place free of politics and influence from the outside; a place for us to discuss video games in their pure form. I remain committed to this.”

While game journalists mock the idea that a video game website could build itself around the tagline of “protecting escapism” and getting away from all of debilitating politics that have made so many major websites worthless and vexing due to the polemics, the gamers seem to have spoken and have contributed nearly $50,000 to the campaign as of the writing of this article.

Unfortunately, Sean Halliday appears to continue to be a casualty of the culture war, first being fired from GOG.com and next being targeted because Hambly wanted him to work at Exclusively Gaming. Halliday will either have to seek employment elsewhere or attempt to pick a side and dive headfirst into the culture war.

(Thanks for the news tip Kyuryon)