Studio Wildcard’s ARK: Survival Evolved recently received a spin-off called Atlas. The game released on December 22nd, 2018. The game was launched under Studio Wildcard’s sister studio, Grapeshot Games. However, gamers have not taken kindly to the game due to a number of issues.

The most obvious issue is that the game is a technical mess at the moment. There’s the typical optimization issues, desynching, bugs, and glitches, but even more than that… gamers discovered that Atlas was supposed to be a DLC pack for ARK: Survival Evolved but was separated and turned into its own DLC.

ARK had an upcoming DLC as part of the season pass. But because a majority of their players had already bought that, and thus less money, they decided to release it as a separate game – through a different company – with the same lead devs as ARK. ATLAS!https://t.co/56mF01Q2B1

This was a common complaint within the review section of Atlas, where gamers discovered that a debug menu seemed to indicate that Atlas was originally supposed to be released as ARK DLC. 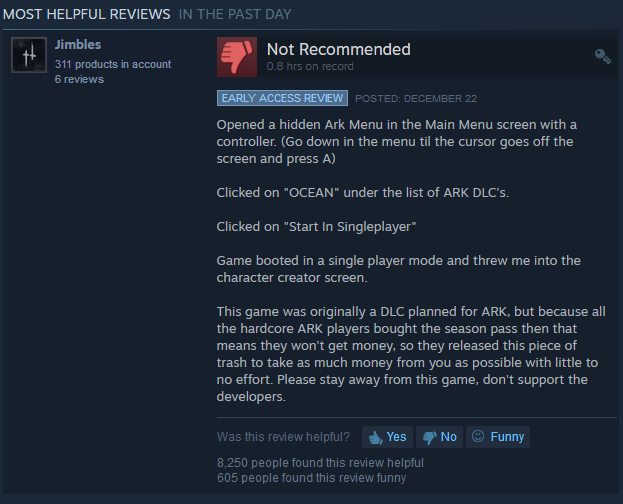 There are literally thousands of reviews complaining about this issue and the performance, so much so that the current status of the game’s user review rating is “Mostly Negative”.

A lot of gamers are calling the developers “monkeys” who attempted to release DLC as a separate game. YouTuber YongYea covered a lot of the issues with the game even from its Game Awards announcement and the bungled release dates that were bumbled up to its release on Early Access on December 22nd.

The launch conundrum was also summed up in a review that gave a brief timeline of events. 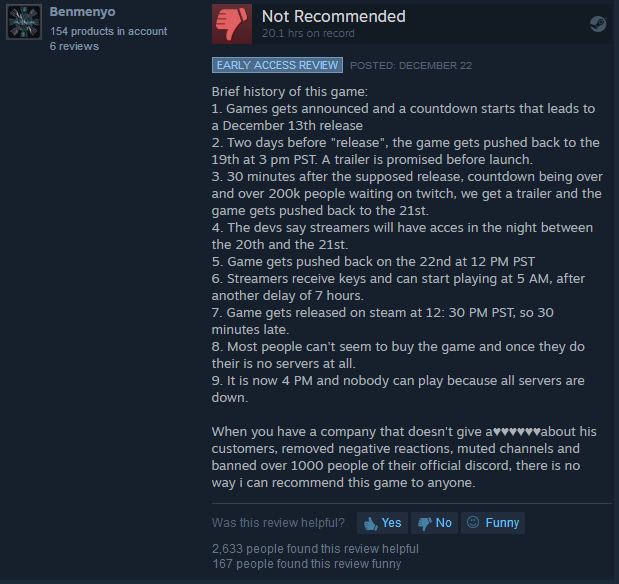 Even still, thousands of people have already purchased the game, many of whom either saw streamers playing it or who wanted something similar to Sea of Thieves and ARK: Survival Evolved.

However, I imagine a lot of gamers were disappointed with the current technical complications burdening the game at the moment, and the revelation that the game was basically DLC split off into its own game to make extra cash.

In a post over on the official ARK website the developers attempted to placate the community back on December 7th, 2018 by stating that both games will be supported and that Studio Wildcard will continue to produce and release content for ARK while Atlas will grow into its own MMO identity…

“Wildcard will continue to support and expand ARK over the years to come bringing new features, fixes, and expansions into the game. Grapeshot meanwhile will grow in a direction oriented towards the operation of the persistent MMO service that ATLAS is, while both games will share technology and infrastructure improvements to complement each other.”

At the moment, the developers plan on keeping Atlas in Early Access for the next two years. The game costs $29.99 over on the Steam store but it’s discounted during the first week of release by 17% at only $24.99.

(Thanks for the news tip Derek Smart)