[Update 12/29/2018:] As noted by English language players, the update and censorship from the Chinese version has made its way into the English versin of Azur Lane for Isokaze.

[Original article:] Yongshi Manjuu’s Azur Lane is an extremely popular mobile game that gamers love for all of the waifu-bait it contains, especially given that many of the female characters have big, juicy anime boobs and are scantily clad. Well, the latest update that was issued on December 27th, 2018 brought with it the new Year’s skin for Isokaze, a loli. However, the skin that the developers advertised wasn’t the skin that made it into the game.

Sankaku Complex is reporting that there was an initial advertisement for the Isokaze New Year’s skin, which features the green-haired, flat-chested loli in little more than thigh-high stockings with a pelvis wrap that barely covers her genitals. There’s an additional red paw-print pastie just underneath the pelvis wrap to keep her naughty bits from being exposed.

The Iso skin update was advertised on December 24th, 2018 via a tweet from the official game’s channel.

The response to the outfit was mixed.

Some of the users liked the outfit, others claimed that it made her look like a “skank” while a few joked about it being cold out and the outfit not doing much to protect her against the weather. The responses became even more mixed when users posted up the differences between the Chinese version of Azur Lane and the Japanese version of Azur Lane.

The Chinese version features Isokaze in a mini-skirt, covering up her crotch and replacing the pelvis wraps entirely. You can see the comparison below. 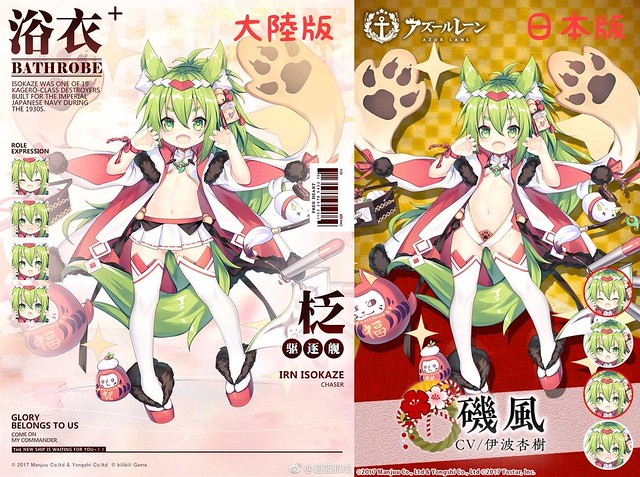 Basically, the Japanese gaming audience whined about wanting Isokaze to wear a skirt like the censored Chinese version.

When the update rolled around, sure enough, Isokaze was wearing the Chinese version outfit.

Not everybody was happy about the change, though. For the people who wanted the advertised outfit, they asked if it would be possible to have an option to see Iso in her pelvis wrap version of the outfit instead.

So Isokaze’s new year skin you using the CN ver.(left) afterall I thought it was some technical mistake back in the live stream.
Ok then! Can you add option to choose Isokaze new year skin in next patch because I like the JP ver. (left) instead. pic.twitter.com/482nQRZAom

Sankaku Complex noted that in one of the threads users were asking about why the outfit changed to the censored skirt version for China.

Now according to one user who tuned into the livestream for the New Year’s content update for Azur Lane, they stated that it was due to Google and Apple content restrictions for apps. Across multiple tweets, user TeguhP wrote…

“Official didn’t mention it at twitter but in their live streaming 2 days ago. The illustration didn’t passed Apple store/Googleplay censorship”

When users asked the Azur Lane Twitter account about the change or to confirm if the change was enforced due to app store policies, they didn’t receive a response. It could be that the staff logged off for the day or it could be that they aren’t allowed to discuss topics such as censorship.

Of course, some gamers asked why would Isokaze’s New Year’s outfit need to be censored but not other characters like Albacore or Dace? But TeguhP threw up a shrug emoji, and the Azur Lane staff didn’t offer any explanation as of the writing of this article.

Sankaku Complex points out that this could be an error or a bug, as it did recently affect the game’s boob jiggle physics, which the developers quickly corrected.

However, given the crackdown on fan-service in recent times, it almost seems unlikely that this was a mistake, but we’ll see.