A couple of weeks ago Amanita Design kowtowed to Social Justice Warriors who complained that the main character in the game – a black dust-bunny – looked racist and was an imitation of blackface. The developers completely changed the color palette of the character to appease the game journalists and Twitter mobs who claimed the developer was racist. It turns out that the people who complained about racism didn’t actually play the game Chuchel, and so in response the people who did actually play game began to rebel.

Gamers who paid for Chuchel review-bombed the game on Steam and started a petition to get Amanita Design to revert the change. They didn’t like that the developer so easily folded to the complaints from people who are perpetually offended about everything.

Instead of offering a middle ground for the people who actually bought and played the game by giving gamers the choice to switch between the orange and black Chuchel, the developers decided to start cracking down on the community dissent, this included closing off the comment section and disabling the ratings on the YouTube videos. 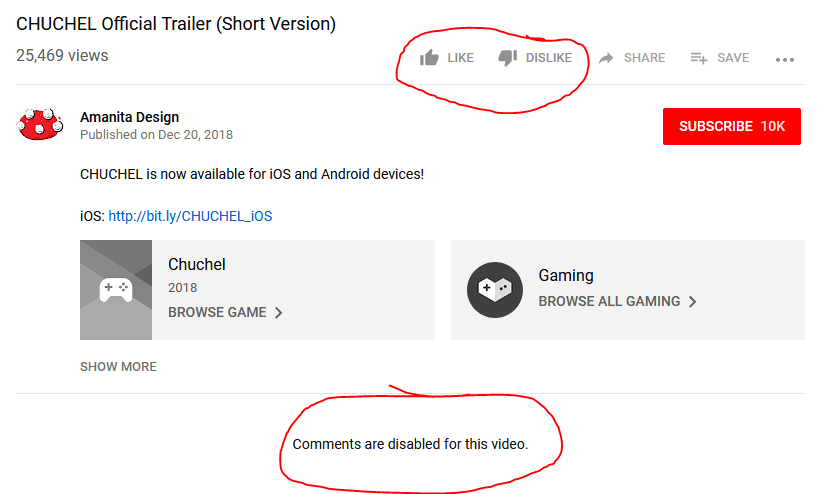 Three days after the trailers were initially posted, they had garnered 14,000 views and only 170 likes compared to 591 dislikes.

As a way to quell the backlash (or at least, the appearance of a backlash) Amanita Design disabled the ratings and comments on the newest Chuchel trailers.

Hilariously enough the original Chuchel trailer from October 5th, 2017 featuring the black design of Chuchel still has a high-rating and the comments are still enabled.

The gist of this story so far is that Amanita Design decided to listen to the loud, vocal minority at the expense of their paying, silent majority. In turn, this turned the silent majority into a loud majority, and now the developers are paying the price for it.

The forums are now filled with complaints, arguments, and irate gamers who feel the developers are more inclined to listen to game journalists than their own community. The first page of the forum board is on fire, with threads popping up stating that now that the developers are getting woke, they’re going to go broke.

What’s baffling about this is that despite the negative reviews, the negative forum threads, the mass downvotes on the YouTube trailers and the negative video comments, the developers seem intent on destroying their goodwill amongst the community all in favor of scoring points with Social Justice Warriors. Truly baffling.