Amanita Design’s Chuchel is catching heat. Lots of hate. Plenty of discontent. No, it’s not because of the character allegedly donning “blackface”, it’s because fans are absolutely pissed that the developers caved to Social Justice Warrior NPCs who claimed that the character resembled “blackface” and that the design needed to change.

Amanita conceded to the demands of SJWs, turning the dusty bunny from a black coagulation of dust and dirt, to an orange looking muppet.

The change came after Social Justice Warriors demanded the change, which started as far back as April of 2018 from Leftist organizations like The Spinoff. Following Amanita swapping out the character palette, a bunch of the howlers and screechers on Twitter praised Amanita for kowtowing to their demands.

I thought Chuchel looked fun, but after I saw someone point out the blackface association I was seriously repulsed. I sincerely hope this is enough to erase the association, but I’m not sure it is. I’m also wondering why this wasn’t addressed sooner.

This is pretty awesome way to respond to something like this. well done!

Makes me feel a bit dumb about the stuffed Chuchel hanging on my wall though … https://t.co/5oFxXX7OxI

Hey, in case any of you missed it, some players pointed out that Chuchel kinda resembles someone in blackface so @amanita_design went ahead and changed the design of the character. This is how you react to being called out. https://t.co/MYSCJXPWfN

Without an education in where it came from, what it signifies, how culture & race historically intesect, these “mistakes” will continue to happen. And it’s clearly not just a U.S. issue, anti-black iconography is a worldwide phenomenon. It’s just barely spoken about elsewhere.

Amanita Design further virtue signaled their compliance with the standards of the Intersectional Inquisition.

In a post made on December 21st, 2018 over on the Steam community forums, Lukas from the design team, wrote…

“You may have been taken by surprise with today’s update for CHUCHEL. It comes with a fair amount of minor bug fixes and tweaks that you may never even notice, but there’s one more thing you surely can’t miss.

“This is your new Chuchel.”

The orange dust bunny did not go down well with gamers at all.

Eklhaft’s comment is probably most poignant since gamers aren’t trying to convince Amanita to change the character through dialogue or discussion, they’re making it known that they’re just not going to give the game a good rating because the developer was cowardly enough to kowtow to the Social Justice Warrior outrage Oberkommandos.

The game’s user review ratings has now dropped down from “Very Positive” into the “Mixed” territory after an influx of negative reviews began pouring in.

Social Justice Warriors hate it when the plebeians fight back, and have constantly tried goading Valve into removing user reviews altogether, or allowing developers to hide them when situations like this arise and the Leftist agenda gets trampled over for being the anti-consumer Communist dictatorship that it tries so desperately to hide from the general public.

In fact, SJWs were complaining on social media about owners of the game who gave it a negative rating following Amanita’s ideological surrender to the cultural censorship commandants.

Oh, goody. Chuchel (@CHUCHELCHUCHEL) is now getting @steam_games review bombed by people enraged that the character no longer has a hint of blackface. pic.twitter.com/RQvhvkTkY4

There are plenty of negative reviews, not because the users support the SJW definition of “racism”, but because people are tired of the political correct police literally policing content to the point of absurdity. Many gamers are also angry that the developer had zero backbone in standing behind their creative work. 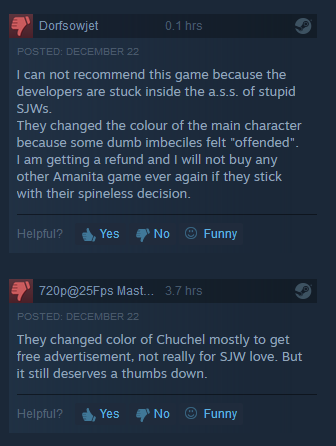 The outrage extended beyond the user reviews, though. Even on the latest trailers the game is getting downvoted into oblivion.

The reasons for the downvotes are also made loud and clear in the comment section.

Basically, gamers are tired of weak-willed developers constantly giving up creative real estate to placate the pin-thin sensibilities of the perpetually offended.

We’re at a point now where a ball of dust is considered “racist”, and developers are so bereft in confidence for their own art that they easily and willingly give it up and change at the whim of some obnoxious voices echoed from faux media publications that are little more than broadcasting platforms for Left-of-center propaganda.

(Thanks for the news tip Afs Don)