Koei Tecmo’s upcoming release of Dead or Alive Xtreme 3: Scarlet for the PS4 and Nintendo Switch is gaining some hype leading up to its release in spring of 2019. Excitement has been brewing following the release of a brand new trailer showcasing the newest members of the roster, Nagisa. She’s the sultry goddess of the sand and the older sister of the more demure Misaki, who is one of the girls who happened to be introduced in DMM’s Dead or Alive Xtreme Venus Vacation.

The new trailer outlines Nagisa’s reasons for going to Zack’s island, and how she’s in search of her sister Misaka. She’s got that tsundere personality, fiery and sassy with that oh-so-sexy body to match; sporting curves to die for and rocking the kind of beauty standards that would make feminists scowl with jealousy.

You can check out the trailer below featuring English subtitles courtesy of SOS Arcade.

Nagisa isn’t wearing the typical leisure bikini that the other girls are sporting. She actually looks like she would make for an excellent addition to the actual fighting game, Dead or Alive 6. She’s in a three piece leotard that stops above her cleavage; it’s sheer with a support bra underneath and a high-waisted thong panty.

She sports short cropped hair with thigh-high tights and leather straps, along with calf-length Gothic boots with metal clamps.

There’s a second higher definition trailer available showcasing Nagisa playing beach volleyball, as well as examining her body in the bedroom, and bending over so you can look straight up in between her legs. Check it out from Dante’s Nintendo Switch World.

Dead or Alive Xtreme 3: Scarlet launches censored on the PS4 and uncensored on the Nintendo Switch with the proprietary 4D Jiggle Physics starting March 20th, 2019 exclusively in Japan.

(Thanks for the news tip Shaun Webb) 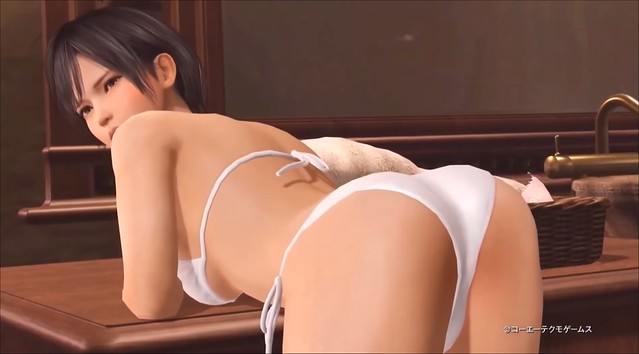