Entergram’s visual novel, Haruoto Alice Gram: Snow Drop, came out back in 2017 for PC. Entegram had plans on re-releasing the game in early 2019 for PS4 and PS Vita over in Japan. However, Haruoto Alice Gram: Snow Drop has been delayed for the PS4 and PS4 Vita from January 24th, 2019 to March 28th, 2019 to accommodate “production circumstances”, as reported by Gematsu on December 6th, 2018.

However, it was discovered by Japanese gamers through the release of CG images that the “production circumstances” delay was actually due to Sony’s censorship policy.

The game’s original CG images had to be censored to meet the new standards set in place by Sony Interactive Entertainment of America. Part of this policy includes the removal of camera angles or screenshots themed around panty shots or characters disrobing when the characters are seemingly of questionable age. You can see the comparison shots between the original PC version of the CG images and the new revised CG images that were posted up recently from the PS4 and PS Vita versions on the Entergram website.

If you’re unable to view the image from the tweet, you can view the comparison shot below, which breaks down how the images have changed from the PC version to the PS4 and PS Vita version. 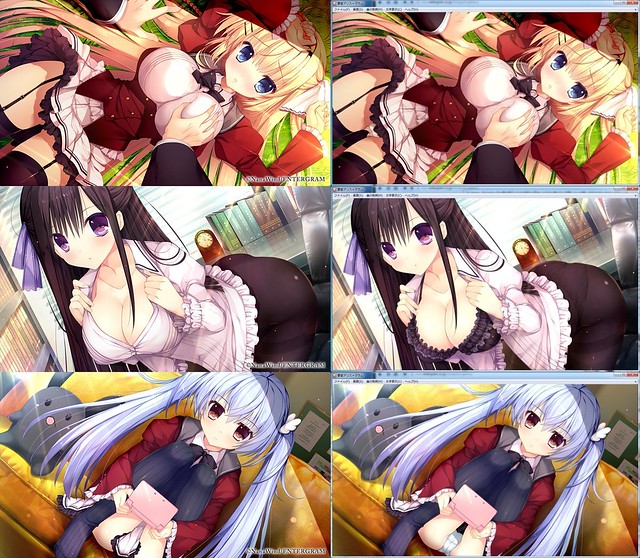 As you can see, the upskirt panty shots have been covered up in the top image, with a shadow now covering up where the bottom part of her panty line was partially visible under her skirt.

In the second image the exposure of the brassiere has been replaced with a closed shirt, and the visibility of her panties underneath her pantyhose have been erased.

Lastly, in the bottom picture the young girl’s skirt now ruffles down between her thighs so that you can no longer view her exposed, white panties.

Some of this censorship ranges from games rated E10+ to Teen to Mature. Sony claimed that it was to match “global standards”, but games like Dream Daddy: A Dad Dating Simulator, which is a gay dating sim, launched uncensored on the PlayStation 4.