Private Division, a mid-tier publishing subsidiary under Take-Two Interactive, announced during this year’s Game Awards that they’re working with Obsidian Entertainment on The Outer Worlds, not to be confused with Outer Wilds. The game is a space Western, where you take on the role of a settler that was part of a colony ship that ends up getting waylaid during a crash on a planet located at the farthest reaches of space.

The small colony currently occupied by various space-faring vagrants and corporate overseers is threatened with destruction at the hands of a dangerous conspiracy. Players will need to explore the colony, defeat the bad guys, gather guns, and attempt to save the colonists. You can check out the announcement trailer below.

It’s obviously like a cross between Borderlands and Fallout: New Vegas, with a touch of Firefly.

I suppose it’s not a surprise that there are some obvious Fallout influences given that some of the original creators of Fallout are working on the game, with Tim Cain and Leonard Boyarsky co-directing.

“There’s something very special about the combination of my lighter humor and Leonard’s darker take on things. It affects everything in the game – the setting, the characters, the dialogs. Plus, we have a great team here at Obsidian, and we’re making sure The Outer Worlds delivers what players want from a new RPG universe.”

The lighter humor definitely came through in the trailer, but it looks like we’ll have to wait for more gameplay footage to see those “darker” elements come into play. 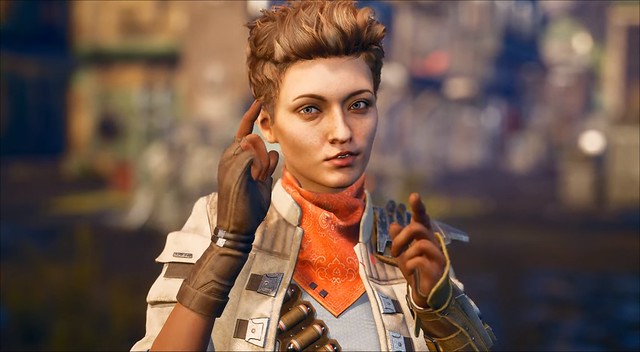 I’m not terribly won over by the game given that, as I mentioned up top, it looks like Borderlands meets Fallout: New Vegas. Also the chick that looks like she could be Tracer’s older sister that’s still recovering from a meth addiction — yeah the chick in the picture above.

Anyway, I suppose if you’re oh-so-readily starved for that combination of sci-fi shooter then you might be salivating at the mouth for a game like this. It’s still a long ways off so manybe they’ll do something about the passe lighting and art-style and at least attempt to spruce it up a bit. Just because it’s an AA game doesn’t mean it has to look like it was cooked up in the boiler room of a Polish parlor made out of the scrap heap of a decommissioned submarine.