Ben Combes’ Commando Ninja is currently up and available for viewing over on YouTube. You can watch the hour long movie for free right now. The Kickstarted retro throwback hearkens back to the classic bad action films of the 1980s and early 1990s.

The movie doesn’t waste anytime, and it starts off with a bang back in 1968 in Vietnam. It makes its ways up through the 1980s and eventually into the 1990s. The story is about the Commando Ninja looking to get revenge after his wife gets killed and his daughter gets captured.

He teams up with his old Vietnam buddies to take down an evil Ninja organization led by a Jewish crime lord. You can check out the full movie below.

While Commando Ninja is definitely a parody of the bad-action genre, it’s far less over-the-top than Kung Fury.

Speaking of Blood Dragon, Thomas Cappeau’s soundtrack borrows a lot from Power Glove’s timeless score for the first-person shooter. It fits in well with the movie’s overall mixture of blood, bullets, and blades. 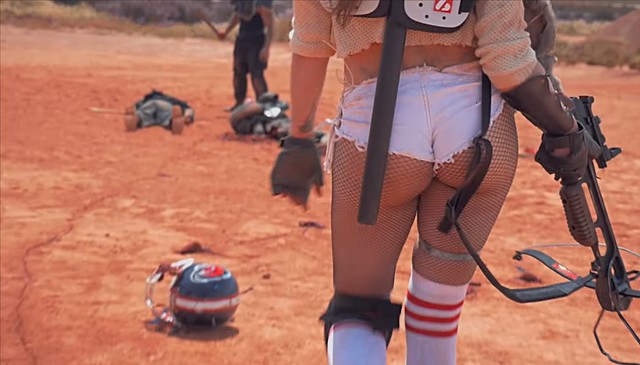 There’s even an entire training montage dedicated to to how John Hunter managed to master becoming a ninja, which is one-part Kickboxer, one part Bloodsport and one part American Ninja, with a side order of Mad Max and Albert Pyun’s Cyborg. It’s a shame we don’t get more movies like this, but I guess you take what you can get while you can get it.

I love that while there’s definitely some satire in the film, it plays certain elements straight enough to make you care. It’s actually one of the better retro films in recent times and definitely worth a watch for anyone who values films that retain a sense of testosterone and feature heroes worth rooting for.

Also, the best line in the movie?

“The Democrats must have taken over”.