Russian developer Albert Zhiltsov, a producer working on the multiplayer shooter game Caliber for 1C Company and Wargaming.net, has come under fire from Russian games media after he called out games journalists as being clickbait parasites that are the equivalent of trash. Some of the journalists are calling for Zhiltsov to be fired, while Zhiltsov himself took to the YouTube comment section to apologize for some of his statements.

Ostrog translated the YouTube comment that was posted by Albert Zhiltsov in the comment section of the video where he spoke for two hours about gaming, development, and the games media becoming corrupt parasites that are good for nothing but clickbait. Zhiltsov explained…

“’I was wrong, of course, using some words. But this is the format — I speak sincerely, may get all worked up and say something. Such words as trash, of course, must be said personally and not broadcasted to the entire internet. I was wrong here, thanks [for pointing out]. I did not think someone other than my friends will watch it. I will keep it in mind, there is nothing to argue about.’’

This sort of mellow recant of his explosive comments that highlighted how games media no longer has a role in today’s gaming industry, especially when YouTubers and streamers better fulfill the role of classic game journalists, the latter of whom have become redundant.

A partial walk back of his statements in the YouTube comment section obviously wasn’t enough to appease some journalists in Russia.

Russian outlet GameMag.Ru practically declared Zhiltsov a heretic who must be cast out of his job or else they’ll stop covering the games from 1C Company.

In the article, the outlet recounts Zhiltsov’s statements during the podcast, and then in the closing paragraph they state…

“GameMAG.ru officially refuses to cover information or support the Caliber project until Albert Zhiltsov is fired from 1C Game Studios.”

The comment section wasn’t entirely in support of GameMag’s threats. 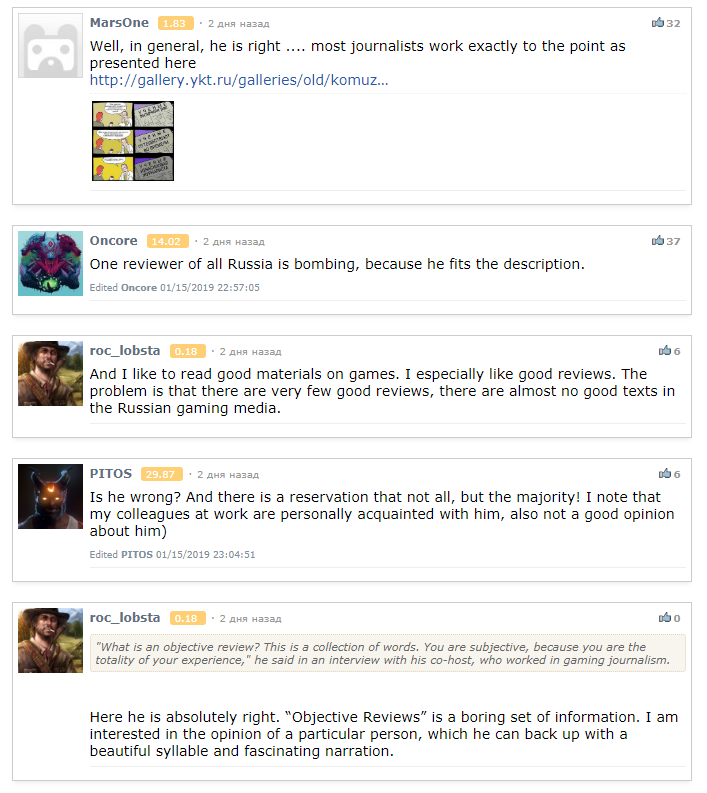 There are some that do agree that how he said what he said was inflammatory and caustic, but most also concede that gaming media is not very reliable nor as useful as they should be. The biggest issue is that many games journalists aren’t very knowledgeable about video games in general, or having barely a passing understanding of how games are developed, so their opinions are usually worth less than the people who buy and play games.

But GameMag’s threats of a boycott are not a foreign concept. VG 24/7 also threatened to boycott GOG.com because they posted a tweet of a gif from a game that highlighted how game journalists are corrupt (and according to all the cataloged information of corruption related to game journalists on the site DeepFreeze.it, it’s not wrong).

It’s unfortunate that Zhiltsov decided to partially apologize for his comments instead of standing by them. 1C Company already issued a statement back when Zhiltsov first made the comments, attempting to placate the media. However, it remains to be seen if they will bow down to the Russian gaming media and fire Zhiltsov for not adhering to serfdom under the corrupt monarchy of entertainment media.

(Thanks for the news tip fakebear)