Event Horizon Games’ D20: Sweet Roll Club has been banned from Steam. The game is about a group of friends who love tabletop RPG gaming and have immersed themselves in an imaginary world of dungeons, magic, and dragons in their fantasy-oriented high school club.

According to an archive of the store page, the game contains ecchi content according to the mature description filter, which reads…

As noted multiple times before, if your game is set in a “school” and contains ecchi or adult content that Valve interprets as “child exploitation”, your game will likely be banned from Steam. It’s become a private policy that Valve has not amended to their standard content policy, which originally only removed games that were “illegal”, infringing copyright, or “straight-up trolling”.

The nudity in d20: Sweet Roll Club doesn’t seem to be anymore extreme than other typical ecchi visual novels, judging by the launch trailer.

However, as we’ve seen in the recent past, Valve seems to be banning games left and right where the characters are even insinuated to be under the age of 18, or are located within a school environment. Games mostly targeted toward the straight male audience also seem to be of particular interest for Valve to censor, since yaoi slasher-fic such as Sweet Pool, which not only takes place in a school, but also features guro and gay sex.

In this case, we don’t know exactly what made d20: Sweet Roll Club as a visual novel anymore extreme than Sweet Pool. The game originally made its way onto the Steam store as far back as 2017, but it didn’t receive its release date until December 20th, 2018. However, on January 9th, 2019, Valve banned the game from the Steam store, according to the Steam database. 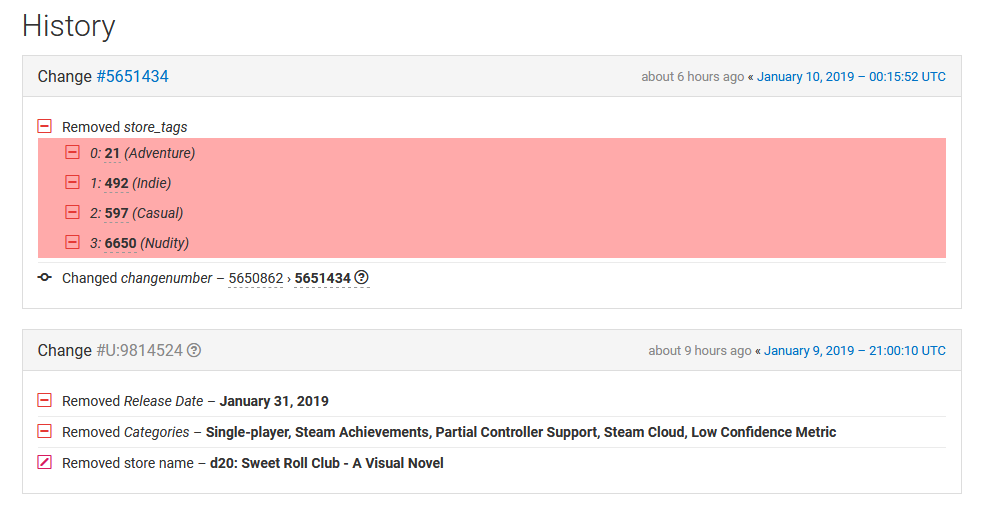 There’s no mention of the ban on the Steam forums from the developer, but one of the individuals following the game did ask about it.

I reached out to ask the developer at Event Horizon Games to find out if Valve gave them any reason as to why the game was banned, but at the time of writing this article, they have not responded.

I also reached out to Valve to ask about the bans on multiple occasions, but there has been no response from Valve over the last three months.